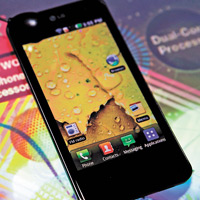 08 November, 2014
Print this article Font size -16+
It’s interesting to think that LG is maker of both the much talked about Google Nexus 4 giant phone and the thoroughly odd Optimus Vu “phablet”. Not wanting to be left out of the phablet race, LG came up with a peculiar square-ish device with a 5-inch screen. At dimensions of 139.6 x 90.4 x 8.5 mm, it’s difficult to hold unless you put it down flat on your palm and stand very still. It may look pretty enough on the table or on a dock, but to take this one up to your ear for a phone call is stretching style rather a lot as you’ll look as if you’re talking into a picture frame.
Talking of pictures, the Vu has a very nice 1024x720 pixels screen with natural colours and viewing angles, though you have to watch out for the auto brightness. The Vu also has a good 8 megapixel camera which takes clear pictures.
Read: A Smartphone Square Off
Other than its shape, the Vu has a good build; big without being heavy, slim without being dangerously light. It has a textured back that will help it not to slip too easily. But it has no slot for its biggish stylus (proudly called the Ruberdium, for some reason) and this means anyone who uses it has to find some way of carrying it without losing it. It’s just an additional thing to worry about. The stylus should have been exciting to use, but it isn’t if you have gone anywhere near the Note II. On this device it isn’t pressure sensitive or fast and nor is it as versatile and feature filled as the one with the Note II. It does have a note and memo app though.
The Vu runs on a 1.5GHz Nvidia Tegra 3 quad-core processor with 1GB RAM and 32GB of internal space and a microSD slot. There’s a 2,080 mAh battery that you cannot get at, but it doesn’t last more than 6 to 8 hours. It’s still on Ice Cream Sandwich.
Launching the Vu at anywhere near the time that the Galaxy Note II arrived was not a good move for LG to have made. In reality, the Vu doesn’t even compare favourably with the original Note. Plus it’s known that LG has a Vu II with some improvements but which hasn’t been launched outside Korea yet. With these phablets, Samsung worked on the ergonomics while LG seems to have gone stubbornly in a different direction and has defied logic with a gadget that you can’t even hold easily. On every other front too – power specs, stylus, battery, operating system , etc, the Vu loses out to the Note II. On top of that, it’s only a few thousand cheaper than the Rs.39,500 Note II at Rs.34,500. Let’s hope the Vu II offers a better experience.
mala(at)pobox(dot)com, (at)malabhargava on Twitter
Tags assigned to this article:
mala bhargava exclusive to web after hours web exclusives more 4 gadgets smartphone lg tablet caught my eyes optimus vu phablet google nexus samsung galaxy note ii gadget reviews