New Delhi (India), February 25 (ANI): Bollywood actor Vivek Oberoi gave his own twist to the popular 'Pawri Hori Hai' meme trend by making self-deprecating jest of himself on Thursday. The Mumbai Police had recently fined him for his video in which he could be seen riding a bike with his wife, without a helmet and a mask on.
The 'Saathiya' actor on Wednesday night shared a video on his Instagram account, dedicated to the Mumbai Police. However, what grabbed the netizens' attention was that he shared the message in a rather hilarious way, emulating Pakistani influencer and content creator Dananeer Mobeen who inspired the popular 'pawri' meme fest.
In the video, he first showcased his bike and then flashed the e-challan issued to him. Vivek said in the clip, "Yeh hum hain, yeh hamari bikes hai aur yeh hamari pawti kat gayi hai."
Using hashtags, Vivek also urged everyone to wear a helmet while driving and prioritising their safety. He captioned the video, "This is for you @MumbaiPolice #pawtikatgayihai #PawriNahiHoRahiHai . . . @MumbaiPolice #SaathiyaOfSafety #WearHelmet #WearMask #SafetyFirst." 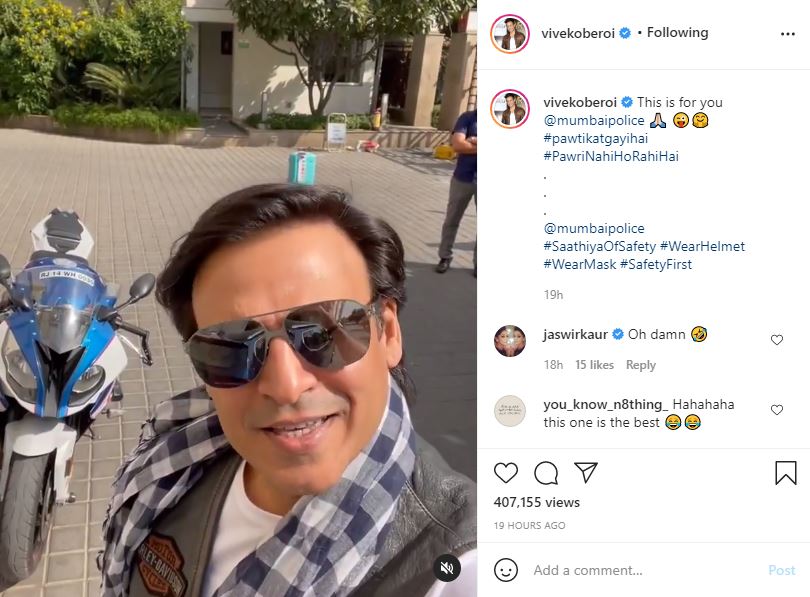 Earlier, on Valentine's Day, Vivek Oberoi had shared a video in which he and his wife, Priyanka Alva went for a joyride on his new bike at midnight on the empty streets of Mumbai. Vivek also met his fans and clicked some selfies with them, at a petrol station.
While the video was showered with love from his fans, it also received a lot of backlash from other netizens, who called him irresponsible for not wearing a helmet while riding the bike, and mask during the on-going coronavirus pandemic.
Soon, an e-challan was issued to the actor-producer by the Mumbai Police for driving without a helmet and flouting traffic rules. An FIR was also filed against Vivek for not adhering to Covid-19 guidelines.
On February 20, Vivek took to Twitter and apologised to the Mumbai police for breaching road safety rules and wrote, "Pyaar humein kis mod pe le aaya! Nikle they nayi bike par hum aur hamari jaan, bina helmet ke kat gaya chalaan! Riding without a helmet? Mumbai police will do a checkmate! Thank u @mumbaipolice for making me realise that safety is always most important. Be safe, wear a helmet & a mask".
Meanwhile, on the work front, the actor is currently working on his production ventures, 'Rosie: Saffron Chapter' and 'Iti: Can You Solve your Own Murder'. 'Rosie' will mark the debut of Palak Tiwari, daughter of TV star Shweta Tiwari. (ANI)