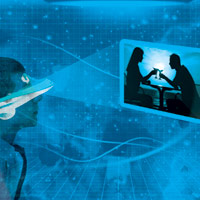 08 November, 2014
Print this article Font size -16+
It seems rather contrarian — a social network buying into virtual reality. Facebook’s acquisition of OculusVR, which makes a virtual reality headset, has confounded most people. Yes, it could make Farmville more engaging — you can actually find yourself among those flocks of sheep but, clearly, there are deeper plans than enhancing the gaming experience. “Strategically, we want to start building the next major computing platform that will come after mobile,” said Mark Zuckerberg, after the acquisition. There are others who think this could be the new direction for social media.

In fact, more than eight months ago, in a blog post, Harish Shah, founder of Stratserv Consultancy, had painted a scenario of social media in 2050: We will meet known or random people in social networks in environments our minds select or concoct, and these meetings will be facilitated by software that interpret our thoughts. Basically, virtual reality will enable us to change the environment of our meeting — you may choose a coffee shop in Rome, or a cruise ship. The possibilities are endless.

Meanwhile, if virtual reality gets added to the social networking experience, then there is the very real danger of us getting trapped in an online world and distanced from physical reality.

But then, the more time we spend there the more it will add to the kitties of the likes of Mr Zuckerberg!

Brand Buzz
Glocal Appeal
Pinterest has now made its content available in Hindi. Users in India can now access a translated version of the website. This is in line with the company’s strategy to make its content available in local languages. In 2013, it launched in more than 20 languages. “Localisation is the first step toward helping pinners discover their interests and hobbies in an entirely new way,” said Matt Crystal, head, International, Pinterest. With firms the world over adopting to go ‘glocal’, the photo-sharing platform’s move makes perfect sense.

Dig The Data
In The Zone
North America at 81 per cent tops regional Internet penetration. Western Europe comes second at 78 per cent. At 12 per cent, south Asia is at the bottom, according to the US Census Bureau, InternetWorldStats and CNNIC

High And Low
Central and eastern Europe top the charts in mobile penetration — 151 per cent — while Africa  with 67 per cent is at the bottom, according to the US Census Bureau, ITU and CIA

Pranav Mistry
@pranavmistry
Vice -president, Research, Samsung
There is the one who talks about vision, progress and shows results. And then there are some others who just talk about that one. #namo4pm