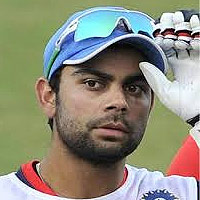 08 November, 2014
Print this article Font size -16+
The seventh edition of the Indian Premier League (IPL) has finally returned to the Indian soil after 20 matches in the UAE and Google Trends have come up with some interesting insights.

Riding high on his blitzkrieg performance, Virat Kohli has become the most searched player of the ongoing edition of the Pepsi IPL 2014. His on-ground performance is also seen to be reflecting in online surge of popularity.The amusing part is that the Chennai Super Kings (CSK) Skipper Mahendra Singh Dhoni, is a distant second, followed by Yuvraj Singh of Royal Challengers Bangalore (RCB).

With one of the most stunning catches taken in Cricket history against RCB to his credit, IPL debutant Chris Lynn (KKR) is on the fourth spot as the most searched player. Kings XI Punjab (KXIP) lead batsman Virender Sehwag may not have scored big runs on the ground yet, but continues to attract a lot of queries from his fans on Google Search, thus pulling him up to the fifth spot.

With the tournament's second leg under-way, on-line search by cricket enthusiasts has seen an increase as fans are following on and off-ground developments related to their favourite teams and players more closely. In addition to fans from India, search trends are also being driven by fans from neighbouring regions including Sri Lanka, Bangladesh and Nepal and UAE.

As the tournament inches towards the qualifier rounds, Google looks at emerging trends and provides insights on what is keeping the fans hooked to the game.