Villas In The Sky 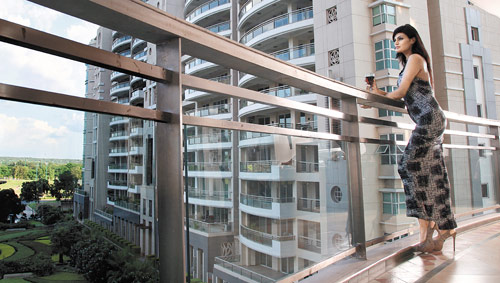 08 November, 2014
Print this article Font size -16+
It was once called Srinivas Mills. In the central Mumbai area of Parel, associated with smoke stacks and textile production, it has been rechristened ‘Upper Worli’ by its buyers, the Lodha Group. The 18-acre sprawl will soon boast of the tallest luxury apartments in India, the 117-storey World Towers and the 60-floor World Crest.

A Lodha salesman, standing before a giant model of the skyscrapers, drops big names for impact. Pei Cobb Freed & Partners, who have also designed the Pyramid at the Louvre in Paris, and the Bank of China Tower, Hong Kong, have conceived the World Towers. Luxury apartments of three and four bedrooms go up to the 43rd floor. Beyond that, till the 82nd floor, it is ‘World Villas’ — 7,000 sq. ft grand apartments spread over an entire floor. And finally the grandiose ‘Mansions in the Air’ — the 15,000 sq. ft duplex palaces.
But what’s different about these high-end homes is the branding. From the high-ceiling reception area, our guide steers the party into the ‘show villa’. The atmosphere changes with the soft lights, and the rich and mellow gold leaf walls and furniture. The interiors have Armani written all over. Everything is designed in clean, straight lines. Nothing juts out. There are no switches, lights turn on automatically; the television unit recedes into the wall. Beyond the spacious living room is a balcony running around the apartment. This is where one can soak in the plunge pool and watch the Mumbai skyline.

Georgio Armani has his stamp on the interiors with his Armani/Casa brand. In the Armani Roca bathrooms, everything, including the toilet paper, disappears into the wall. The kitchen has the Dada branding.

A New Trend
“We wanted to create an iconic product, and by branding it, we add value,” says R. Karthik, the chief marketing officer of the Lodha Group. “The additional value is because of the exclusivity defined by how desirable we can make the product, and how selectively it is traded.” Branding interiors, developers like Lodha hope, will not only create a superior product but also add a 30-60 per cent premium over similar products in the market.

Branding homes and hotels in developed markets is not new. The Trump Towers in New York and Chicago or the Armani-branded hotels in Milan and Burj Khalifa in Dubai have added premium to real estate. In India, it is a new trend though. In Pune, Panchshil Realty has teamed up with Donald Trump to brand their two 22-storey towers in Kalyani Nagar as ‘Trump Towers’. The project, flagged off last month by Trump himself, offers 6,000 sq. ft apartments with embellishments like a special home theatre room.

Another ambitious branded luxury project by Panchshil Realty, ‘yoopune’, is offering 228 apartments in six towers spread over 17 acres in the posh Koregaon Park area. The ‘Yoo’ branding, owned by designer Philippe Starck and realtor-entrepreneur John Hitchcox, kicked off in Manhattan nearly two decades ago, and quickly spread to other low-rise cities like London, which began embracing classy, skyscraper-styled homes. In Pune, the buyer also gets to indulge in the branded Sixth Sense Spa, a tea lounge and even a cigar room as part of the common offerings. The pre-sale bookings for the apartments were done at Rs 15,000 a sq. ft, a 50 per cent premium on the luxury Pune market.

In Bangalore, the CityView project, promoted by a joint venture between UK-based Westcourt, Goldman Sachs and Bangalore-based Century Real Estate, is being marketed with Four Seasons branding. The Four Seasons Hotel will extend to the 21st floor of the South Tower, the residences will be in the North Tower and in the higher floors of the South Tower. The Four Seasons apartment owners will also get to use all the services offered by the hotel.
break-page-break
Another unique branding exercise is by Sunteck Realty. It has teamed up with the Walt Disney Company to create branded children’s bedrooms and play areas in its 23-acre residential project ‘Sunteck City’ in Goregaon, Mumbai. “We have licensed as many as 100 Disney characters, including the Avengers, to adorn the children’s rooms. For Disney branding, this is a first,” says Sunteck Group’s CMD Kamal Khetan. “Disney commands a strong  recall value, especially in the international markets; and kids are more important today when their parents go shopping.” Sunteck claims the company has opened sales for its three Disney- branded towers at Rs 11,000 a sq. ft, a 20 per cent premium over the local market.

Defining Exclusivity
Though builders now offer branded interiors and apartments, they still have to prove themselves. In January 2011, Rohan Lifescapes teamed up with Donald Trump, and Mumbai’s Trump Tower was announced with much fanfare as a 42-storey luxury apartment project near South Mumbai’s Girgaum seaface. Eighteen months later, there is no trace of the project.

Does branding define luxury for India’s super rich, or is it location and ‘high quality’?

Om Ahuja, CEO of property brokerage JLL Residences, says terms like ‘premium luxury’ are much abused concepts. “Yes, branded luxury apartments is a new trend, but in India, the super rich are willing to pay for the address and the pin code and not so much for a brand.” The focus is on specific localities. In Chennai, it is Poes Garden; in Kolkata it could be Alipore and Ballygunge, explains Ahuja. Branding may not work without the right address.

Many big builders like Hiranandani, DLF or Unitech consider themselves to be brands that represent premium quality, and would not sell their stock using an Armani tag. Also, if a developer can get premium rates by adding features and quality that people want, he may not see the need to pay a license fee or a 10-15 per cent share of his revenue to the brand owner for his tag.

In Gurgaon, the Ambience Group is promoting Caitriona, abutting the Ambience Mall, with a promise of “seven-star living”. The 240 ultra-luxury homes spread over 10 towers start at 6,400 sq. ft and Rs 14 crore, with the penthouse apartments going up to 11,500 sq. ft. It has all the features of ‘luxury’ that a buyer may want: access to a 9-hole golf course, laundromats at ‘zero’ level, and furnished ready-to-live interiors.

Meanwhile, Anshuman Magazine, CEO of broking firm CB Richard Ellis India, feels that some big brands like Trump may not be willing to spend the money and effort on what they may perceive as a risky project in India.

Karthik of the Lodha Group is, however, confident that over time, branded luxury homes will be a part of India’s landscape. “Yes, people are willing to pay for an address; but that is what we aim for: to make branded projects like the World Towers a sought-after address.”