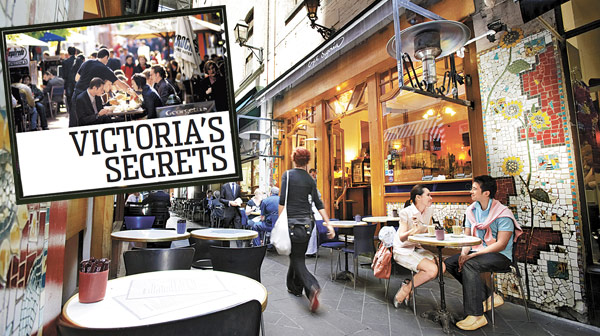 Needless to say, Coda is, or should be, on every foodie's wishlist. But true to Melbourne's penchant for a secret life, the restaurant is ensconced in an unlikely basement; a location no sought-after restaurant in India is likely to rent. But that's what makes the city special. Nothing is brash or pompous; rather they're casual and genial. At Coda, the look is deliberately non-white-tableclothed. Distressed walls, bare bulbs and large glass windows let life on the streets inside, making it carelessly chic, but so do the unselfconscious Melbourners lunching there.

It's the same spirit everywhere — at Eau de Vie, the crowded, jazzy bar with molecular cocktails; at Sigolo, the salon-style, rooftop place with cocktails, boutique beers, chatty barmen and bouncers and a superb view of a cathedral; and at MoVida, which has made eating tapas on barstools terribly trendy.

Cocktails, by and large, are more expensive than Victoria's wines and boutique beers (all of Foster's seems to be exported, so do not go looking for it). But if you are indulging, do so in caffeine. Some of the best lattes on the planet are here — not too milky — even though a "long black" may be your poison. Most places roast their own beans and you can have a different single-origin coffee at the same place on different days. Italian and Greek migrants may have set up the city's first espresso bars, but the latest trend is micro-roasting and, well, coffee labs!

Sensory Lab Café is pitched as the world's first coffee lab. The white-tiled counter, beans in the sink, lab-coated baristas and coffee brewing in a siphon (one of the four methods by which blends and single-origin coffee is brewed in-house) all contribute to the laboratory, experimental feel of the place. I try a single-origin Nicaraguan brewed using the siphon; it is less bitter with cleaner flavours (drink it sans milk and sugar, please). There is also the newly-chic, tiny Bar Americano (at the end of Presgrave Place, but even Google Map can't pinpoint the exact entrance), from the same stable as Der Raum, a bar with everything going for it — sous vide, stunning glass bottle installation and molecular cocktails. At Bar Americano, you can have bitter espresso, standing up, Italy-style, or Prohibition-era American cocktails without being aware of any ostensible clash of cultures.

However, hot chocolate may be Melbourne's best-kept secret. At Monsieur Truffle's, full of fine chocolate creations, I sample a totally smooth, silky and slightly bitter concoction, just right for a chilly day, better than what you may find even in Europe, except perhaps in Belgium.

Pop-up restaurants are fashionable too. If you are lucky, you can grab a seat like we did at Joost, where everything is recycled: from the strawboards used to build the space to jam jars fashioned into crockery and to waste from toilets made into fertiliser. The Med-inspired food is fresh, using herbs from the vertical garden and flour milled on premises.

On the fringes, former milk booths and bread shops are the fashionable new spaces for food retail, as everything from Ethiopian to Asian sells. The CBD arcades spill over with fashion incubators, unlikely stores selling only Russian dolls or lace or buttons, Florentine paper or zines (limited edition, handmade magazines) and street food from around the world.