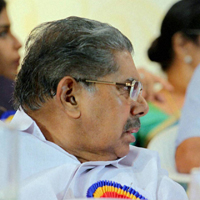 08 November, 2014
Print this article Font size -16+
Amid sharp divisions between two ministries on relaxing sourcing norms for FDI in single brand retail, Union Minister Vayalar Ravi has shot off a letter to the Prime Minister cautioning that easing of 30 per cent procurement requirements will lead to dumping of cheap imported goods in the country.

"If there is any relaxation in this norm, itself, it would lead to major upsurge in cheap imported goods, which are being made in non-transparent economies where direct and indirect subsidy regimes coupled with currency controls, which ensure unfair exports to third countries," Ravi, Minister for Micro, Small and Medium Enterprsises (MSME), said in his letter.
Any dilution of this norm, is therefore, fraught with adverse economic as well as political consequences, he added.
In a bid to accommodate demands of Swedish furniture chain IKEA over sourcing norms for FDI in single brand retail, Department of Industrial Policy and Promotion (DIPP) has proposed allowing foreign retailers to procure from large Indian firms as well.
On the other hand, Micro, Small and Medium Enterprises (MSME) Ministry has suggested that foreign retailers be allowed to source from Micro and Small Enterprises (MSEs)only.
Besides, the ministry said a foreign retailer could be given a period of seven years even after the units have grown in size and exceeded the stipulated USD one million investment limit in plant and machinery.
Commerce and Industry Minister Anand Sharma is likely to meet Ravi tomorrow to thrash out divergences on sourcing norms related to FDI in single brand retail.
Ahead of the meeting, DIPP Secretary Saurabh Chandra and his MSME counterpart R K Mathur discussed ways on how to address issues raised over the mandatory 30 per cent sourcing norm, specially those raised by IKEA, which plans to invest Rs 10,500 crore in India.
"DIPP has proposed that 30 per cent sourcing will be done by foreign retailers from Indian units, including large ones, but preferably from micro, small and medium units, where it is feasible," a source said.
Another source said MSME Ministry, however, preferred to stick the sourcing to only MSEs but was open to relaxing clauses related to size of the units.
"If a micro or small unit grows in size and crosses the defined threshold, as a result of becoming a supplier to a foreign retailer, it must still be considered as sourcing from MSEs for a period of seven years from the date of first transaction," a source said citing MSME Ministry's proposal.
IKEA had asked the government to allow it to continue sourcing from small units even after the vendors have crossed the mandatory USD 1 million investment limit and become large set-ups.
In his letter, Ravi, however, said "Government can always give a relaxation that if small units have grown bigger, sourcing from such units would still be considered to be sourcing from small industry."
"Surely, it is not in the interest of our country to keep the small industry, small. As a country, we should be happy to see small industry grow and become globally competitive," he added.
The Swedish firm had also said the calculation of the 30 per cent norm be done for cumulative periods of 10 years of operations starting with the approval of the present application.
Sources said this demand could also be partially met by tweaking the conditions.
"Initially, if the foreign retailer cannot buy 30 per cent of its total requirement from MSEs in one year, it can be allowed to make up the shortfall in the next year. After two or three years, the foreign retailers would be required to meet the annual sourcing target over and above making up for the shortfall in previous years," a source said.
According to the present FDI Policy on single brand retail, mandatory sourcing of at least 30 per cent of goods sold would have to be done from Indian small industries /village and cottage industries, artisans and craftsmen, annually.
(PTI)
Tags assigned to this article:
business anand sharma retail news 4 fdi vayalar ravi dipp msme small and medium enterprises retail department