Chamoli (Uttarakhand) [India], February 8 (ANI): Rescue operations to save at least 30 people who are stranded at a tunnel near Tapovan Dam in Chamoli district is underway while 12 people have already been rescued from another tunnel, said Vivek Pandey, Indo-Tibetan Border Police's (ITBP) spokesperson on Monday.
The ITBP has deployed 300 personnel to carry out rescue operations at the tunnel.
"We have intensified search operation at the second tunnel. We have information that around 30 people are trapped there. Around 300 ITBP jawans are deployed to clear the tunnel. Local administration says that around 170 people are missing," said Pandey.
"ITBP rescued 12 people from a tunnel yesterday, these 30 are trapped in a different tunnel. The rescue operation is underway in different areas. More teams will be sent there if it is required, we are focussing on rescuing people from the tunnel first," he added.
Earlier today, the State Disaster Response Force (SDRF) removed the debris and slush at the tunnel near Tapovan dam here in Chamoli district, following the glacier burst which led to heavy flooding in Dhauliganga and Alaknanda rivers.

The force had to wait for the level of the Mandakini river to lower, to commence rescue operations for the people who are stranded in the tunnel.
ITBP, the Indian Army, the SDRF and National Disaster Response Force (NDRF) forces are engaged in the retrieval in the affected areas.
Meanwhile, a canine squad has also been deployed to carry out the search operation near the Tapovan dam. 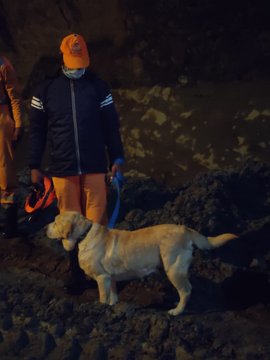 On the other hand, aerial rescue and relief missions have resumed with Mi-17 and ALH helicopters flying from Dehradun to Joshimath with disaster relief teams on board, said the Indian Air Force (IAF).

Tapovan Hydro-Electric Power Dam, also known as Rishi Ganga Project was completely washed off following a glacier burst in the Chamoli, said the Indian Air Force's initial report as Advanced Light Helicopter (ALH) deployed at Joshimath has undertaken recce of affected areas.
Uttarakhand Chief Minister Trivendra Singh Rawat has announced an ex-gratia of Rs 4 lakhs each to the kin of those who lost their lives due to the glacial burst.
On the cause of the disaster, the Chief Minister said experts can tell the reason behind the glacier outburst, adding the government is focusing on saving the lives of people and the rescue operation.
A glacial broke in the Tapovan-Reni area of Chamoli District of Uttarakhand on Sunday led to massive flooding in Dhauliganga and Alaknanda rivers and damaged houses and the nearby Rishiganga power project. (ANI)