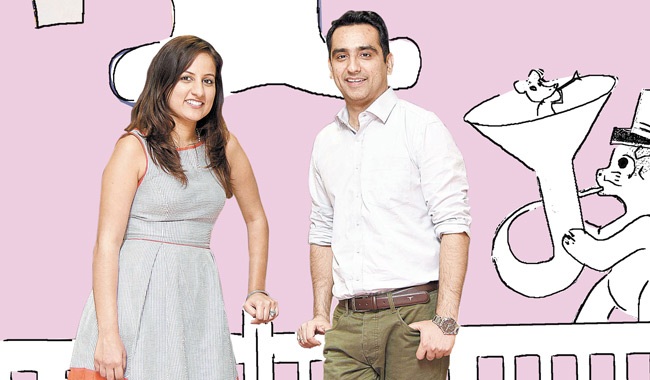 09 June, 2015
Print this article Font size -16+
In India, 60 per cent of the people live in nuclear families and 80 per cent of family decisions are taken by young mothers. It was these numbers that had Naiyya Saggi, co-founder of BabyChakra, thinking about the need to make parenting easy for young couples, especially when traditional family structures are gradually breaking down. With these thoughts, Saggi returned to Mumbai after finishing her MBA from Harvard Business School and started talking to friends about the entrepreneurial ecosystem. Many of them, who were also young parents, voiced a unanimous pain point: difficulty in finding and deciding on child care services around their vicinity. They found local services by asking Facebook friends for suggestions or by doing a Google search, which didn’t always provide an adequate solution to their problem, shares Saggi.

It was then that Saggi, along with her childhood friend Mitesh Karia, who was then working with HSBC bank, set up BabyChakra, an online platform to help young Indian parents discover and decide on local services for moms and children, right from when they are expecting to when their child is five. They launched the closed version of the BabyChakra mobile web product in June 2014 in Mumbai. Their aim was to ease the process of decision-making for parents and develop their community so they could get support and advice from each other in real time.

To build this community, they started a MomStars programme in September 2014. This entailed having a group of local, influential mothers who acted as BabyChakra’s evangelists in their community. Their task was to inform others about what was happening in their locality and write candid reviews on local services. There are around 400 MomStars in Mumbai, Delhi and Bengaluru today. “Of these, 100 are quite active and write a review or share feedback every alternate day,” says Saggi. In return, they get special privileges, exclusive event invites and services from BabyChakra. The MomStars community acts as an offline-online touch point for BabyChakra, which is essentially a tech startup.

Saggi and her partner have based their offerings around three features — local services, content from experts on maternal and child care, and events for kids. They launched their website in November 2014 in Mumbai, then in January 2015 in Bangalore and recently in Delhi. They have added another feature, ‘Buzz’, to make their platform social. This allows a user to contact any parent and follow their posts and reviews.

“The social and community feature of BabyChakra differentiates it from the other players in the industry. There are e-commerce companies which are primarily like an online store, and then, there are a few international content sites, mainly blogs, which may not often be relevant for Indian parents. There is no player that has yet built a community of local parents for discovery of services, content and reviews in this space. BabyChakra is special since it helps in discovering and making decisions on local services for parents through social integration, crowdsourcing and community building,” says Karan Maheshwari, chairman of MIPL, who is also one of the investors in BabyChakra.

To bring in more personalisation, BabyChakra has ensured its website is mobile-compatible as parents were accustomed to ‘Googling’ for information on local services on their phones. The startup will launch an Android app in Mumbai next month. Since the BabyChakra team was part of the Google incubation programme, Launchpad, the company has offered to spotlight their app on its Play Store. Till now, more than two lakh people have used the BabyChakra platform; of these, 25,000 are registered users on the website.

One of the main challenges that the BabyChakra team faced stemmed from this business being very operations heavy. “On one hand, we have to list the local services and events and then go for their verification,” says co-founder Karia, who looks after the operations part of the business. “A lot of times we would update it on the site and realise two months later about the closure of that service. Managing this along with developing the community of parents was a tough model to crack. Now, we have streamlined a process where our team verifies the service profiles every three months.”

At present, the BabyChakra website has 5,500 listings of local services. Even though these listings are from vendors in Delhi, Mumbai and Bangalore, they have users from 20 countries such as the US, UAE, UK, Singapore, Australia and South Africa. Karia says these parents may be visiting the site to read the content covering topics ranging from planning a baby, to delivering one, to raising a toddler. Also, many of the Indian expatriates in these countries are keen to know about the services they can avail of when they are back home.

Although the firm is still in the process of finalising its revenue streams, it has earned Rs 1.5 lakh by giving premium listing to local services such as hospitals, baby photographers and child-friendly restaurants. It has also logged revenues by signing up with brands such as Mahindra Retail, Johnson & Johnson and stem cell bank Lifecell by helping them connect with the local community of mothers to sample their new product or service. A revenue source the BabyChakra team is planning to tap is getting people to transact on its website and earning a commission on the transaction.

This year, investors including Mumbai Angels, Singapore Angels Network, and Arihant and Shruti Patni of wealth management company Patni Financial Advisors have invested an undisclosed seed round in BabyChakra. The startup will use the money to upgrade technology, hire more people and expand into three more cities. “After moving to metros, one of the challenges the company might face is expanding into tier 2 cities where technology penetration is not deep,” says Maheshwari of Maheshwari Investors.

Since its launch, the company has already grown 35-40 per cent, says Karia. “We want parents from across the world to use BabyChakra for all child care decisions. It is the potential of having billions of BabyChakra babies in the future that is super exciting and keeps us going,” says Saggi with a glint in her eye.