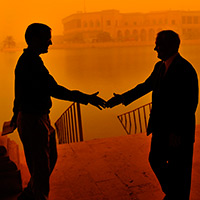 02 December, 2014
Print this article Font size -16+
In Silicon Valley 64,000 programmers and engineers had filed a lawsuit against Apple, Google, Intel and Adobe Systems accusing them of not employing each other’s work forces. In April 2014, companies relinquished and settled at a $324.5 million deal to dismiss the allegations of conspiring, in the interest of steaming competition and inhibiting wages.

This trend of big conglomerates getting into bilateral agreements may seem like an industry wide mesh of containing talent. Few may even consider this as a deterrent in corporate cross pollination but the reality is - it is highly unlikely that the dream MNCs will do away with the idea of colluding to protect their talent factories. This in the Indian context too, has in the past brought many repercussions and arguably will continue to do so in varying degrees of coercive or complying implementation tactics. Preparedness and lawfulness may act as redeemers if used unambiguously with tactful precision.

In early 90’s, India’s economy was undergoing continuous reforms also driven partly by significant internet usage. Big words like ‘Globalisation’, ‘Liberalisation’, and ‘International economic integration’ et al were being heard too often in the corporate corridors and boardrooms. Restrictions on large investments were lifted; infrastructures progressed owing to reduced budget deficits and better tax reforms. GDP per capita had doubled in BRIC countries. A 6% annual growth in India was a decent indicator of rising jobs and manufacturing index. Capitalism as they say is one of the greatest social technologies that helps create prosperity in the society. Small businesses wanted to grow into larger enterprises, larger into global and many more were willing to ride on the capital risk and start their own. This was the advent of ‘Cold Wars’ too. Resignations were flying over emails and text messages, relieving letters and certificates were hoarded in faulty attempts of retaining. Temping was happening big time with companies hiring via agencies to mask direct enrolments from rival companies. Overall, ‘demand’ was higher than the supply and India was yet not talking actively about training and development. Hiring skilled staff was a whale of a task. Despite the verbal pacts and understanding amongst competing companies not to raid other’s senior seasoned workforces, the thin glass of trust was noticeably ‘broken’.

LG entered India in 1997. I saw myself struggling to recruit; we had to roll out our national launch campaign. It was all happening at speed of light and razor sharp timelines, within 3 months we had set up a pan India presence via 18 branches. I was occupied not just with screening CVs at my table; I was also receiving threatening calls from representatives of dominant brands. Industry grapevine bounced stories of how leaders of competing brands were having sleepless nights over safeguarding their hard earned market intelligence and proprietary information. They were spending more time devising strategies to protect intellectual properties and copyrights than briefing agencies on new brand campaigns.

I remember, Samsung India had once alleged that one of its senior employees took away company’s significant information and joined LG India. The situation was however averted and matters mutually resolved before they could escalate into snowballing of contempt. Later, directives were chalked out for staying as friendly foes. We could also save incessant money rolling out into unending legal coffers. There may be higher penalties for ‘apple’ of the eye companies and the rest may not have to shell out even that huge amounts like Intuit, Pixar and Lucasfilm had weed out the trouble for a mere $20 million. So what remains implausibly common in US and India in terms of hiring is the possibility of defendants not being distressed by means of any recruiting scandal. A status- quo for all involved will prevail most of the times.

India for investing foreign companies has always remained promising and full of opportunities. The country’s economy had witnessed a considerable expansion between 2006 and 2011, achieving a CAGR of 7.8 %. The salaries here have largely seen an average 10 -12% increase y–o-y irrespective of tumultuous global business environments, meltdowns and attrition. But what India has learnt from its unusual development path since 90’s is that while the shift to manufacturing from agrarian economy was slow, the shift to services has been rapid. Initially, it gave the service sector esp. IT the right start, but now manpower costs appear to be superseding real performance output. Indian companies still lack top of mind recall when global MNCs are seeking partners for high end or value added deliveries. For longer run, the absence of organic growth within a sector and within a certain job description can be morally damaging. For e.g. why do we not read ‘BPO burgeoning in India’ stories anymore. Have we already lost the turf to Philippines?

If we go by industry estimates, by 2025, India’s manufacturing sector that presently contributes 16 per cent to its GDP, may reach US$ 1 trillion, dependent on a hypothesis that the inclination of MNCs to establish low-cost plants in India will only grow. This, if follows the trajectory well, will yield up to 90 million domestic jobs, with the sector contributing to about 25–30 per  cent  of India’s GDP. The service sector account for around 60 % of the country’s GDP. According to NCAER, service sector is also projected to grow at 5.6% in 2014-15. On the whole, fancy estimates about job creation should encourage the Indian employees to envisage a bed full of roses. But that is not the end picture. Why would otherwise companies be considering Africa over India as manufacturing hubs? To deliver value added services is what motivates the workforce and that comes when products are developed indigenously. R&D setups will have to inevitably come to India.

Last year, India’s share of global R&D spending rose to 2.7 per cent from 2.6 per cent in 2012. The number of MNC R&D centers in India increased at a CAGR of 14.4 per till last year. Even though the Indian government is working untiringly towards involving the private sector in R&D across various sectors like vaccines, pharma, solar energy, etc, MNCs seem to bring in R&D centers quite superficially. They are yet hesitant to bring their core R&D technologies and employ engineers as they distrust the political milieu around labor laws, job contracts and other legal obligations. They fear problems of very high attrition (around 26 per cent last year), misuse of patents and IPRs.

The downtime until there are stricter hiring practices, adequate manpower, requisite skills, engagement contracts and sharper implementation techniques are put in place, the present arrangement will not help corporate India soar higher than the rest of the competing world.