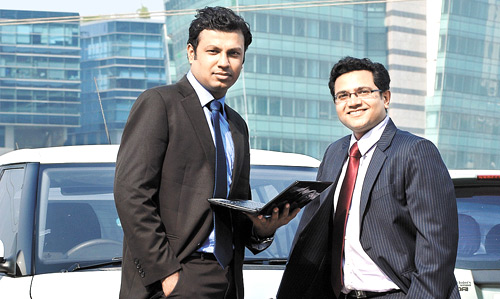 Sellers gain as they can hook into a group of buyers without much of a sales effort or advertising cost. "Instead of pitching and eliminating doubts of customers individually, here we deal with just one point person," says K. Shekhar of Mumbai-based Swaroop Developers, which offers 2- and 3-BHK flats in the central suburb of Bhandup through groffr.com. The model works: groffr.com, which was started in July 2010, has already received a commitment of $1 million in funding from India Angel Network.

Similarly, a car dealer can sell much more at almost no cost. "As an alternative sales channel, we cost nothing to the dealer and have commitments to sell 20-30 cars," says Shukla of runpapa.com, which started offering deals in the NCR in May 2011 and sold 70 new cars within 60 days. The company has now set its eyes on Gujarat and Maharashtra.

Of course, not all deals close. "Out of 10 deals featured, three will not happen," admits Vikhyat Srivastava, founding partner of groffr.com. At times, the company does not get enough prospective buyers (and genuine at that) to close a deal at the featured discount. "There are people who register just to try out the model or for plain research," he adds.

Sold On The Idea
For groffr.com's founding partners, Srivastava and Sandeep Reddy, the genesis of the idea came from a close observation of the spends of B-school graduates; and their own background in the real estate sector. "We used to have these bulk deals for laptops and educational loans when we were in college," points out Srivastava, who left his job at Kotak's real estate fund in March 2010 to start the venture. "We observed that most B-school graduates would have similar needs like buying a car within a year of starting their careers, purchasing a house within five years, or travelling abroad at least once a year," he adds.

The IIM-Kozhikode batch mates smelt an opportunity. They gathered like-minded people with similar income over their B-school alumni group, Verkko, which means network in Finnish, and brokered their first real estate deal in Mumbai.  "We sold some 35 flats (worth Rs 50 crore) at a discount of 32.5 per cent within four days in May 2009," says Srivastava with a smile, who, along with Reddy, pocketed a handsome Rs 12 lakh each in the process. That would have been much more if many buyers had paid their commissions promptly. Since then, they have turned the model to one-side commission from the developers. Groffr now wants to expand across major metros.

break-page-break
And why not? Since it set out in July 2010, groffr.com has struck deals worth Rs 250 crore with discounts of 10-15 per cent on an average. The ticket sizes have ranged between Rs 65 lakh and Rs 1.20 crore. What makes Srivastava and Reddy dream big is the commission they earn on such deals: at 1-2 per cent per deal from sellers. The first-generation entrepreneurs aim at high gross value of the deal through either small groups for luxury villas or large groups for budget apartments — whichever is workable and has shorter turnaround time.

Brokerage commission is the chief revenue stream for most firms. But others such as   Mumbai-based Hem Tejuja of grouphomebuyers.com plan to tap alternative revenue channels. Apart from the intermediary commission from sellers, Tejuja — who has partnered with actress Shilpa Shetty for the venture — also charges developers for the advertising space on his website, sells leads and develops projects in collaboration with land owners.

"In good times, they (developers) will not entertain you for discounts. But they will spend aggressively on advertising and marketing to compete with each other," he says, adding that with Shetty as the chairman, many developers are promoting their projects through his website. Tejuja claims to have registered 25,000 hits on his site in the first two months, with five deals worth Rs 8 crore already in his kitty, the average discount being 15 per cent. He also boasts of facilitating lowest interest costs and instalments on the basis of his industrial linkages, along with free gifts worth Rs 2-4 lakh in the form of free registration and home security appliances. It helps that the managing director of Group Home Buyers started his career as a  partner at stock broking firm Sharekhan.com in 2001, and arranged finance for retail-brand Provogue and security services firm, Tops.

Is group buying the result of the economic downturn? Yes and no. While the downturn has resulted in real estate discounts, Swaroop Developer's Shekhar feels that there will be discounts for group purchases even in a boom market. "We have to maintain our relationship with them as they do the sourcing and bring ‘leads' to us. Plus it reduces our effort as well," says Shekhar explaining the rationale for such tie-ups. Adds groffr.com's Srivastava, "Discounts get thinner in good times. They don't go away. Even in good times, there will be developers who would be interested to negotiate to get access to funds or to compete in a crowded market."

Runpapa.com's Shukla, however, feels that group buying works best in a slow demand season. "In a good season, when discounts are lower, if one can sell more number of low-selling models, the dealer will be interested." Apart from reverse group buy (prospective buyers mention their needs on the basis of which these firms look out for more like-minded buyers), runpapa.com has three revenue streams: used vehicle sale-purchase service, used car certification and automobile accessories. It also facilitates financing and insurance for automobiles. The company, backed by venture capitalists and technology professionals, wants to ramp up new car sales to 2,000 units per month within the next two years.

In Pune, Nitin Degaonkar of homebuyerscombine.com has adopted a bottoms-up approach. "We are creating clusters of people who are looking for a specific type of house, with specific location and budget and then either initiating projects along with developers or approaching upcoming projects that suit the needs of these clusters," says the founder. "Professional investors fund the project during land acquisition itself. We have, instead, facilitated involvement of buyers at such a nascent stage and it allows a developer to offer a good price benefit to them against a sizeable down payment."

Since last January, Degaoankar has made bookings for 400 houses with gross value of Rs 150 crore and discounts averaging 10-15 per cent. In his first deal, Degaonkar booked 150 houses worth Rs 50 crore at a 25 per cent discount near Hinjewadi IT Park. With three deals for 300 houses worth Rs 120 crore on the block, he sees revenues of Rs 3-5 crore from the first year of operations. Scouting for venture funding, Degaonkar, who charges a first year facilitation fee of 0.5 per cent from buyers and 3-4 per cent from sellers, estimates revenue growth of over 100 per cent over the next three years.  He also has plans to expand to Bangalore, Chennai, Hyderabad, Navi Mumbai and NCR.

While some players have stuck to adhering to the basic brokerage model, others are trying to hedge their risks by dabbling with multiple services. "There are about 21 such clones in India," says groffr.com's Srivastava. "But we have evolved our model every six months." Last year, groffr.com added ‘suggest a deal' feature for buyers to submit their requirements, assisted readymade buyer groups in negotiating with the developers, and collaborated with brick-and-mortar property brokers to get better discounts. With deals worth Rs 340 crore including more than 500 houses and 70 cars finalised and another few hundred in the pipeline, the first batch of group home and car buyers has been enrolled. And from the looks of it, the class size is only going to increase.