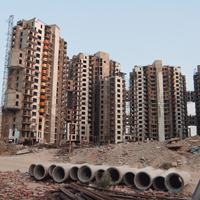 The company's net profit for the fiscal third quarter was Rs 84.17 crore compared with Rs 55.20 crore a year earlier, it said in a statement on Wednesday.

Net sales were up 25 per cent at Rs 645 crore over the same period.

Analysts expected the company to post a net profit of Rs 80.84 crore, according to Thomson Reuters I/B/E/S.

Unitech, which builds houses as well as commercial and retail properties, had a mobile phone joint venture with Norway's Telenor that was among those whose licences were revoked by a court following the high profile licensing scandal.

On Tuesday the company's shares ended down nearly 18 per cent after media reports of the company's Managing Director Sanjay Chandra's involvement in the allocation of mobile phone airwaves five years ago. The company has strongly denied any allegations.