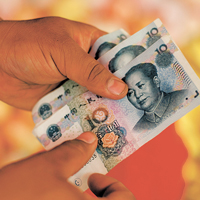 In spite of huge trade surpluses and high inflow of foreign funds into its economy, China has kept its currency persistently weak by trading renminbi for dollars, which it has accumulated in huge quantities. Over the past few months, even as the dollar fell against other currencies, China has kept the yuan pegged on the dollar. This is giving Chinese exporters a significant advantage over its rivals including India, which competes with China in sectors such as textile and leather items. To make things worse, the rupee, at 46.22 to a dollar, has risen by about 14 per cent from a record low of 52.20 in March.

India's exports declined for the 13th consecutive month in October, down
11.4 per cent to $12.5 billion, as demand from recession-hit western economies remained low.

According to the Centre for Monitoring Indian Economy (CMIE), exports will decline by 11 per cent during 2009-10. The trade deficit has also widened substantially since February 2009 from $2.1 billion to $8.4 billion in August. CMIE forecasts that the trade deficit will stand at $104 billion this fiscal.