Unease Grows Among US Doctors Over Indian Drug Quality 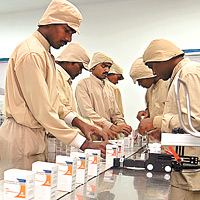 08 November, 2014
Print this article Font size -16+
Some US doctors are becoming concerned about the quality of generic drugs supplied by Indian manufacturers following a flurry of recalls and import bans by the Food and Drug Administration.

India supplies about 40 per cent of generic and over-the-counter drugs used in the United States, making it the second-biggest supplier after Canada.

"I'm just beginning to realize the gravity of the problem," said Dr. Steven Nissen, head of cardiology at the Cleveland Clinic. "It's terrible and it is starting to get a lot of traction among physicians."

Indian drugmakers are by no means the only companies to recall products or be warned by the FDA about manufacturing problems. For instance, quality control failures at Johnson & Johnson forced the company to recall dozens of products over the past five years, ranging from artificial hips to children's Tylenol.

And last year, Germany's Boehringer Ingelheim said it would shut down its US contract manufacturing unit, Ben Venue Laboratories, after it was cited for repeated manufacturing violations that led to shortages of the cancer drug Doxil.

India's drugmakers, a $14 billion industry, reject any criticism that their products are inferior to drugs made in other countries.

"We have heard doctors making generalized statements, without being specific on any product or company," said D.G. Shah, Secretary General of the Indian Pharmaceutical Alliance, a trade group representing large Indian drugmakers. "This is a deliberate and serious campaign to malign the Indian generic industry."

If U.S. doctors come across a medicine that does not meet quality standards, they should report it to regulators, he said. "Doctors are not in a position to judge whether manufacturing processes are correct or not. That is the U.S. FDA's job."

Generic drugs account for nearly 85 percent of medicines prescribed in the United States and the government is relying on them to help rein in healthcare costs.

"We are losing control over what people are swallowing," said Dr. Harry Lever, a cardiologist at the Cleveland Clinic who is trying raise awareness of the matter among U.S. lawmakers. "Now, when a patient comes in who is not doing well, the first thing I do is look at their drugs and find out who makes it."

Increasingly, Lever said, he is recommending patients seek out generic drugs from specific manufacturers outside India.

"I'm tending to stay away from India," he said. "There's something wrong. Too many things are happening."

India Doctors Hit Back
Indian physicians do not share the concerns.

"Our drugs are being sold in many countries and being accepted, so we have no issues," said Narendra Saini, Secretary General of the Indian Medical Association, a voluntary body of 215,000 doctors. "How do I know that Western drugs are better than our drugs?"

A 2012 report by India's parliament alleged collusion between pharmaceutical firms and officials at the Central Drugs Standard Control Organization (CDSCO), the country's drugs regulator, and described an agency that was both understaffed and underqualified.

Saini said physicians trust that the CDSCO is taking care of the quality and the standard of the drugs made in India.

"We very much trust those medicines," he added.

Representatives of Ranbaxy, Sun and Wockhardt were not immediately available to comment.

Dr. Joel Zonszein, director of the Clinical Diabetes Center at Montefiore Medical Center in New York, said he is concerned about the quality of generic drugs in general, not just those from India. He cited, as an example, his experience with the diabetes drug metformin.

"When patients open the bottle of medication it smells like dead fish," he said. Zonszein did not know which company made the foul-smelling drug.

Physicians do not have a say in which generic drug a patient receives, as that depends on which products are stocked by individual pharmacies. If a patient wants to avoid a certain manufacturer, he or she may have to change pharmacies.

Doctors may specify that the branded version of a drug be dispensed, but insurance companies frequently refuse to pay for them.

Dr. Richard Kovacs, who heads a number of American College of Cardiology committees and sits on its board of trustees, said doctors may need to play a greater role monitoring the medications prescribed by their practices.

"The average US cardiologist has been able to assume that the drugs were safe and effective. It now appears we need to be more vigilant as a profession, and assist the FDA by reporting cases where we are concerned about irregularities in the drugs supplied to our patients," he said.

Hard To Keep Up
FDA Commissioner Margaret Hamburg, who recently returned from her first official visit to India, is urging greater collaboration between the two countries. During her visit, the FDA and India's Ministry of Health and Family Welfare signed a statement of intent to cooperate to prevent the distribution of unsafe drugs.

Shortly afterwards, India's drug controller general, G.N. Singh, said in an interview that the country will follow its own quality standards.

"The FDA may regulate its country, but it can't regulate India on how India has to behave or how to deliver," he said.

Some companies seem to be responding to the FDA's actions.

Piyush Nahar, an analyst with Jefferies India Private Ltd who recently met with a number of Indian drugmakers, said in a recent report that most companies "have increased their investment" in compliance and some are considering investing in U.S. or European facilities "to overcome challenges relating to both regulations and perceptions."

The array of recalls and warning letters can be dizzying.

Ranbaxy recently recalled more than 64,000 bottles of a generic cholesterol-lowering drug after doses were mixed up in a bottle, and Sun began recalling 2,528 bottles of a diabetes drug after a bottle was found to contain an epilepsy treatment.

Those mix-ups follow a recall in January by Dr. Reddy's Laboratories Ltd <REDY.NS> of more than 58,000 bottles of its heartburn drug lansoprazole due to a microbial contamination.

"It's hard to be sure on a day-to-day basis with the array of medications that you have to be potentially aware of that there's a specific problem with a specific medication from a specific generic manufacturer," said Dr. Elliott Antman, a cardiologist at Brigham and Women's Hospital in Boston.

The medical community is dependent on agencies such as the FDA, he added. "The bottom line for me is we have to make sure they have sufficient resources to do their job correctly."

To Dr. Jason Gaglia, a diabetes expert at the Joslin Diabetes Center in Boston, the warning letters and import bans indicate the FDA is doing its job.

"Is it scary? Yes. But to me it means the system is working," he said.