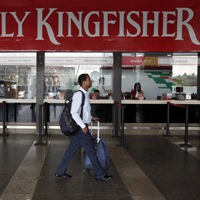 08 November, 2014
Print this article Font size -16+
Hopes of ailing Kingfisher Airlines resuming operations on 5 October faded with last ditch efforts by the management to persuade striking engineers and pilots to return to work failing to end the deadlock over the issue of non-payment of salaries for last seven months.

Civil Aviation Minister Ajit Singh also expressed doubts whether the carrier, facing a partial lockout, will be able to fly from Friday.

Kingfisher Airline CEO Sanjay Agarwal and other top officials of the carrier held a meeting with engineers and pilots in Gurgaon city to convince them to join duty.

Sources said the management offered the March salary to the employees and promised to pay the remaining six months salary once the airline is recapitalised. This offer was rejected by the engineers and pilots. A similar meeting had taken place in Mumbai on 3 October where the same offer had been made by the airline.

The employees there had also turned down the offer.

Asked by reporters if it is likely that Kingfisher will resume its flights from Friday, Singh said, "I do not want to make any value judgements. My job as the civil aviation minister and that of the DGCA is to make sure that before Kingfisher flies they follow all the safety parameters." He further maintained that the airline should be in a position to get its planes certified and satisfy the aviation regulator Directorate General of Civil Aviation that the schedule which they have given is maintained.

Kingfisher has been saddled with a huge loss of Rs 8,000 crore and a debt burden of another over Rs 7,000 crore, a large part of which it has not serviced since January. Several of its aircraft have been either taken away by its lessors or grounded by the Airports Authority of India for non-payment of dues during the past few months.