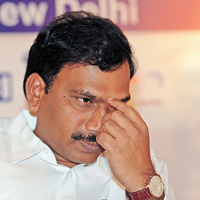 Corruption is conspicuous in India; it is not  unusual either for a minister to have to resign on account of corruption. But it would be difficult to find even rajahs of yore who had such a spectacular fall as Andimuthu Raja. For days he was tossed about between Delhi and Chennai like a shuttlecock. Assured finally that he could keep his ministry, he boarded the flight back from Chennai to Delhi, to find when he landed that the chair had been removed from under him while he was in the air.

His predecessor, Dayanidhi Maran, had also to step down, but with rather more dignity. Maran had come in with impeccable credentials: he was grandnephew of M. Karunanidhi, the Tamil king and king-maker. He did not have to become a minister; Sun TV, which he ran with his brother Kalanidhi, was a lucrative business. Dayanidhi was a much-celebrated telecommunications minister. He relaxed the limit on foreign investment in equity from 49 to 74 per cent. Consequently, investment poured in, and the subscriber base went up in his two-year tenure from 76 to 206 million. He forced the department of telecommunications to reduce wireless-to-fixed access charges to a reasonable level. He did not neglect the interests of his native state; under his guidance, major telecom manufacturers made a beeline to Tamil Nadu.

But then, he was tripped by an opinion poll in his family's daily, Dinakaran. It showed that 70 per cent of the respondents wanted M.K. Stalin, Karunanidhi's younger son, to succeed him, and that only 2 per cent preferred Azhagiri, the second son of the second wife. Who would blame the Tamils? This is the same Azhagiri who, though central minister of fertilisers and chemicals, avoids Parliament like the plague. It took him 14 months after becoming minister to make his first statement to Parliament, to the effect: "Question Number 161. A statement A to E is laid on the table of the House." Because Dinakaran reported on Azhagiri's lack of popular appeal, Dayanidhi was removed and replaced by Raja in May 2007.

Raja had a chance of emulating Dayanidhi's success: 2G spectrum still remained to be allocated. Instead of auctioning it, he chose a peculiar route: he gave it only to those who had applied for it in 2000, and at a fixed price of Rs 1,569 crore per megahertz, the price paid by the fourth bidder in the auction of 2001 when there were only 4 million subscribers. Amongst these antiquated applicants too, his ministry favoured a few. He thus restricted access to those who had bidden in 2001, and gave them bandwidth at a low price. Estimates of what they saved vary from Rs 46,000 crore to Rs 1,40,000 crore. What they gained was what the government lost. The estimates of loss have been worked out by the Comptroller and Auditor General, whose report drove the last nail in Raja's coffin; more juicy details have been leaked to the press by people in the government and Parliament.

What all the accounts meticulously omit in is the history. For eight out of ten years preceding Raja, ministers of the National Democratic Alliance government had handled his ministry with singular lack of distinction. They had inherited a situation in which private entrants into the industry had been driven to desperation by predatory prices charged by the department of telecommunications for calls terminating in its network. They worked out a solution which was highly satisfactory to the private operators. The truth or otherwise of rumours that unprecedented bribes were paid in return is not established; what is known is that Pramod Mahajan, the minister who masterminded the licence allocation, was killed by his brother out of jealousy of his wealth and that his son is rich.

The underpricing of the spectrum entails the possibility that those who were awarded it gave bribes. What is not established, despite the energetic excavations of the press and the CAG, is that Raja received any. If they were given, they could equally have gone to bureaucrats, or Raja's party, or its leading coalition partner. Before they convict anyone, courts insist that his guilt is proved beyond doubt. The Supreme Court took a keen interest in Raja. But according to its own standards, he is not proven guilty; and the search for the real culprits has not even begun. The sanctioning authority, otherwise known as Prime Minister, may have been indulgent; but maybe he knew something we do not.