US To Station Military Aircraft In India? Govt Says No 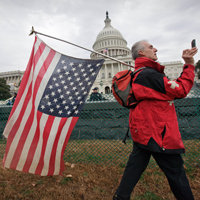 08 November, 2014
Print this article Font size -16+
A top US Air Force official's remarks that his country is planning to station a military aircraft in Thiruvananthapuram as part of it's policy of encircling China with defence bases has created flutters in India and the government has dismissed any such possibility.

General Helbert 'Hawk' Carlisle, the Commander of the US Air Force assets in the Pacific, had told reporters at a breakfast meeting recently that the American Air Force was planning to expand its presence in Asia as part of the 'pivot to Asia' policy. The idea behind it is to ring China with US and allied forces.

"This is just the start of the Air Force's plan to expand its presence in Asia. In addition to the Australian deployments, the Air Force will be sending jets to Changi East air base in Singapore, Korat air base in Thailand, Trivandrum in India, and possibly bases at Kubi Point and Puerto Princesa in the Philippines and airfields in Indonesia and Malaysia," he was quoted as saying by the Foreign Policy magazine and other media outlets.

General Carlisle said "we are not gonna build any more bases in the Pacific to support the US Air Force's increased presence there." The US Air Force has nine major bases in different countries.

The new doctrine means the air force will start regularly sending aircraft to countries the US has not had a presence in the Cold War.

The General's views have created a sort of unease here.

Top Defence Ministry sources said the Ministry is not discussing with the US any plans to base its assets on Indian soil.

"India is not going to allow any foreign country to establish any military base on it's soil," the sources said.

"India carefully maintains ties with countries in the world. As a policy, we are not part of any military and do not intend to be part of any in future as well," they said.

Reacting critically to the US move, the CPI-M said the remarks of the US Air Force General reveals the Pentagon's plans to draw India into its strategic alliance in Asia.

The US has been keen to use our air and naval bases. It is based on the India-US military framework agreement signed in 2006, CPI-M General Secretary Prakash Karat said in his reaction.

He asked the UPA government to publicly state whether it was agreeing to such an arrangement.

"India cannot become a military ally of the US," he said.

Things Might Get Better On Inflation Towards End Pf Sept: SBI Chairman