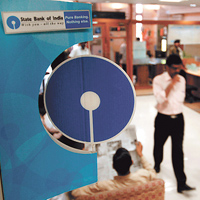 08 November, 2014
Print this article Font size -16+
The State Bank of India on Thursday, 9 May, 2013 said it is confident of meeting the regulatory requirements at one of its US arms soon and also that it is working towards appointing more professionals, including banking secrecy executives, as desired by the regulators there.

"There is absolutely no fine and no instances of mismanagement on our part. This is a minor issue. A section of the media here has blown the issue out of proportion and that there are nothing much in contravention to the regulatory requirements.

"Already we have taken a number of steps and are doing more to improve the overall operations and meet the regulatory requirements on the hiring soon, including inducting banking secrecy executives. We hope to come out of the consent mechanism as fast as possible," Hemant Contractor, managing director and group executive in-charge of international operations at SBI, told PTI.

When asked about the reported high bad loan levels at the California operations, Contractor said, the bank has been working on improving it and the same "has come down to under 4 per cent now, while the capital adequacy ratio is a high 20 per cent."

Measures will help the bank meet the risk-mitigation measures demanded by local US regulators, he said, adding having the banking secrecy executives across its US operations will help SBI meet the KYC requirements as specified by Federal Deposits Insurance Corporation (FIDC).

Recently the US federal regulator had asked the Californian subsidiary of State Bank of India not to open a new bank in the country without the permission of regulators and also to bolster its compliance with the Bank Secrecy Act.

In a March 20 order, the Federal Deposit Insurance Corporation and the California Department of Financial Institutions had asked SBI California to have and retain qualified management and conduct within 90 days, an independent study to ensure it "is staffed by qualified individuals commensurate with its size and risk profile to ensure the safe and sound operation of the bank".


The 17-page order also ordered SBI California, which has its branches in Washington DC, and is registered as a community bank, to appoint a well-qualified chief executive officer, a chief financial officer, a president/chief operating officer and a bank secrecy act (BSA) officer.

In doing so, the order sought to ensure that the bank complied with the applicable laws and regulations, and operated in a safe and sound manner. The federal and the state agencies require the right to determine if SBI had qualified management officials, the order said.

SBI California, which has collective assets of USD 787 million, has also been asked to eliminate from its books, by charge-off or collections, all assets classified "loss" in the ROW that have not been previously collected or charged-off.

Among other things, the order also asked the bank to file with the FDIC "reports of condition and income which accurately reflect the financial condition of the bank" including "any adjustment in its books made necessary or appropriate as a consequence of any FDIC and/or CDFI examination of the bank".

The nation's largest lender has 180 overseas offices and branches spread across 34 countries contributing around 20 per cent of its total business.