US Raises Stalled WTO Talks With India, No Sign Of Breakthrough 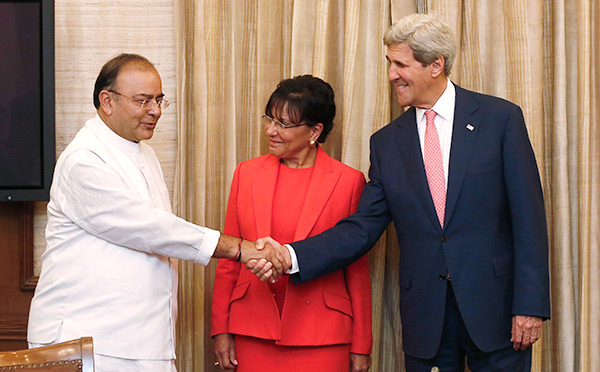 08 November, 2014
Print this article Font size -16+
The United States raised the issue of a stalled trade agreement during talks with India's finance minister on Thursday (31 July), a source at the meeting said, hours before a deadline passes for New Delhi to sign a deal backers say would boost the global economy.

US Secretary of State John Kerry, accompanied by Commerce Secretary Penny Pritzker, met Arun Jaitley as part of a strategic dialogue that has been overshadowed by India's refusal to sign the trade facilitation deal.

New Delhi has insisted that, in exchange for signing up to the World Trade Organisation agreement, it wants to see more progress on a parallel pact giving it more freedom to subsidise and stockpile food grains than is allowed under WTO rules.

According to the source, who declined to be identified, Jaitley repeated his country's position. The source added that neither side put forward any suggestions on how to break the deadlock.

The deal must be signed in Geneva on Thursday, and India's ultimatum has revived doubts about the future of the WTO as a negotiating body.

"If India does end up blocking (on Thursday) there is already a group of members who are interested in pursuing that path," a source involved in the discussions said.

"A dozen or so" of the WTO's 160 members had informally discussed pushing ahead with the trade facilitation agreement with less than 100 percent participation, the source said.

US And EU Involved
The WTO says a successful deal could add $1 trillion to the global economy and create 21 million jobs.

An Australian trade official with knowledge of the talks said a group of countries including the United States, European Union, Australia, Japan, Canada and Norway began discussing the possibility in Geneva on Wednesday afternoon.

A Japanese official familiar with the negotiations said Japan was still working on reaching a consensus, while a State Department official travelling with Kerry in India said the United States continued to talk with India on the deal.

A WTO spokesman said the group's director-general would hold meetings throughout the day to "avert a crisis.

"Delegations are showing real commitment to finding a solution and the director-general remains hopeful that a solution can be found," he said.

US trade officials in Washington were not available for comment, given the late hour, while EU, Canadian and Norwegian officials could not immediately be reached for comment.

"Active Discussion"
Technical details would still have to be ironed out, but there was a "credible core group" that would be ready to start talking about a deal without India when WTO diplomats return from their summer break, the Australian official said.

To what extent the alternative proposal, and India's hardline position, were part of political brinkmanship was unclear. New Delhi's absence from any agreement would be a setback given its size and importance in global trade.

"What began as a murmur has become a much more active discussion in Geneva and I think that there are a lot of members in town right now that have reached the reluctant conclusion that that may be the only way to go," the official said.

Trade diplomats had previously said they were reluctant to consider the idea of the all-but-India option for the customs pact, partly because it would be hard to exclude one free rider in practical terms and partly because the agreement in its current state requires an amendment to the existing WTO treaty, which appears to make India’s cooperation vital.

Others pointed out that many countries, including China and Brazil, have already notified the WTO of steps they plan to take to implement the customs accord immediately. Other nations have begun bringing the rules into domestic law, and the WTO has already set up a funding mechanism to assist.

One trade diplomat in Geneva described two worlds moving in parallel, with a few WTO members wrangling with India, and others moving ahead as if oblivious to India’s objections.