US Defence Secretary Backs TPP For Influence In Asia 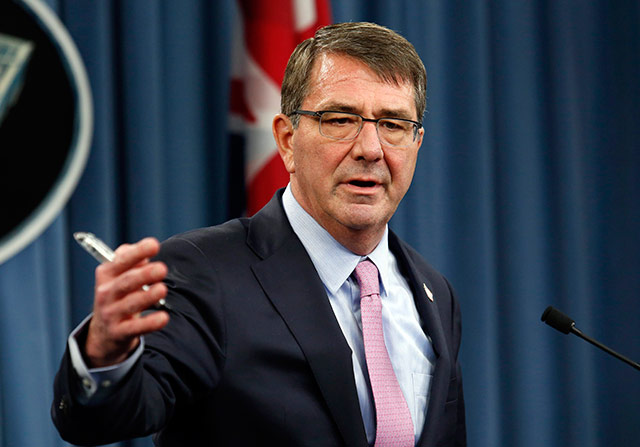 07 April, 2015
Print this article Font size -16+
U.S. Secretary of Defense Ash Carter on Monday threw his weight behind the Obama administration's bid to clear the way for a pan-Pacific trade pact, arguing that time was running out and that without a deal, U.S. influence and Asia-Pacific stability were at risk.
Twelve Asia-Pacific nations have been trying to conclude a trade agreement known as the Trans-Pacific Partnership (TPP). But delays in the U.S. Congress in finalising the Trade Promotion Authority that President Barack Obama needs to streamline its passage through Congress have raised doubts about whether it can be achieved.
Speaking ahead of his first trip to Asia as defence secretary, Carter said the U.S. policy of building Asia-Pacific stability and prosperity had succeeded because it had been a priority for both Democratic and Republican administrations.
He called on Congress to pass the presidential trade authority, saying the TPP was one of the most important parts of the Obama administration's "rebalance" to the Asia-Pacific and made "strong strategic sense."
In fact, Carter said, passing the agreement "is as important to me as another aircraft carrier."
"It would deepen our alliances and partnerships abroad and underscore our lasting commitment to the Asia Pacific," Carter said in a speech at Arizona State University, from where he was due to head to Japan and South Korea.
"Time is running out. We already see countries in the region trying to carve up these markets ... That risks America’s access to these growing markets and it risks regional instability. We all must decide if we are going to let that happen."
At least 35 countries, including key U.S. allies Britain, France and Germany, have said they will join the China-led Asian Infrastructure Investment Bank, in a potential setback to U.S. efforts to extend its influence in the region.
Carter spoke at the university’s McCain Institute, named after the family of influential Republican Senator John McCain, chairman of the Senate Armed Services Committee. McCain is a supporter of the TPP but has been a persistent critic of Obama on other issues.
Writing in the New York Times on Friday, two former U.S. officials said a TPP failure would "further rattle" allies already concerned about U.S. reliability after the 2013 U.S. government shutdown and Obama’s failure to act on Syria.
"The critics have exaggerated and distorted the economic costs of the accord while all but ignoring its benefits and the strategic costs of a rejection,” wrote Roger Altman, a former deputy treasury secretary, and Richard Haass, a former senior State Department official.
(Reuters)
Tags assigned to this article:
china top 2 barack obama us congress john mccain trans-pacific partnership asian infrastructure investment bank ash carter