US Bombers Sent To Korea For Diplomacy Not Destruction 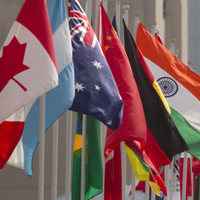 08 November, 2014
Print this article Font size -16+
The stealthy, nuclear-capable US B-2 bomber is a veteran of wars in Iraq and Libya, but it isn't usually a tool of Washington's statecraft.
Yet on 30 March' 2013, the United States sent a pair of the bat-winged planes on a first-of-its-kind practice run over the skies of South Korea, conducting what US officials say was a diplomatic sortie.
The aim, the officials said, was two-fold: to reassure US allies South Korea and Japan in the face of a string of threats from North Korea, and to nudge Pyongyang back to nuclear talks.
But whether North Korea's young new leader, Kim Jong-un, interprets the message the way the White House hopes is anybody's guess. His first reaction, according to North Korean state media, was to order his country's missiles ready to strike the United States and South Korea.
A senior US official said Kim's late father, Kim Jong-il, was at least more predictable: He would issue threats that got the world's attention without provoking open conflict, and then use them as leverage in subsequent diplomatic negotiations.
This time, US intelligence analysts are divided over whether Kim Jong-un is pursuing the same strategy. "It's a little bit of an 'all bets are off' kind of moment," said the official, who spoke on condition of anonymity,.
The official said the idea for the practice bombing run, part of annual US-South Korean military exercises named Foal Eagle, emerged from government-wide discussions over how to signal to Seoul and Tokyo that Washington would back them in a crisis.
It is less clear whether Washington informed China, North Korea's neighbor and only major ally, in advance.
The plan was approved by the White House and coordinated with South Korea and Japan, the official said.
Reassuring Allies
While the 20-year-old B-2 often flies for long durations - 44 hours is the record - Thursday's flight of approximately 37-1/2 hours was the plane's first non-stop mission to the Korean peninsula and back from Whiteman Air Force Base in Missouri, Air Force officials said.
With Pyongyang threatening missile strikes on the US mainland, as well as US bases in Hawaii and Guam, the flight seemed designed to demonstrate how easy it would be for the United States to strike back at North Korea.
It is far from clear that Pyongyang, which has had mixed success in its missile tests, can make good on its own threats.
"This is useful reminder to the South Koreans that the US nuclear arm can reach out and touch North Korea from anywhere. We don't need to be sitting there at Osan Air Base," south of Seoul, said Ralph Cossa, president of the Hawaii-based Pacific Forum CSIS think tank.
"This also reminds the Chinese that North Korean actions have consequences. It tells them that the US is taking North Korean threats seriously but we're not panicking," he added.
The senior US official said that once the Foal Eagle exercises are concluded, the Obama administration hopes to pivot to a diplomatic approach to North Korea, and hopes Pyongyang will reciprocate.
US Secretary of State John Kerry is expected to travel to East Asia in about two weeks, the first of a parade of senior Washington officials headed toward the region.
45-Minute Naps
Thursday's drill was a rare moment in the limelight for the B-2 "Spirit" bomber, which began life with a slew of cost and development troubles for manufacturer Northrop Grumman Corp but has become a mainstay of US nuclear deterrence.
Long-duration missions, in which the bomber is refueled in midair, are "a challenge on your body and mind, staying sharp," said an Air Force captain and B-2 pilot. Under the service's security rules, the pilot could only be identified by his radio call sign, "Flash."
The captain, who did not participate in Thursday's practice mission over South Korea, said flight doctors have devised special regimens to keep the plane's two-man crew sharp.
They include 45-minute naps, on a cot in the back of the plane, that end a half hour before "critical events" such as in-air refueling or dropping ordinance, he said.
All 20 of the United States' B-2 bombers are based at Whiteman, and they saw combat during the US invasion of Iraq and the NATO mission that led to Libyan leader Muammar Gaddafi's overthrow.
In the 1980s, the Pentagon had planned to buy 132 of the bombers, whose main mission was to penetrate the Soviet Union's airspace undetected. The program was drastically cut back after the Berlin Wall collapsed in 1989.
So elite is the B-2 pilot corps that more people have been in outer space than have flown the aircraft, "Flash" said.