US Assistant Secretary To Visit India Next Week 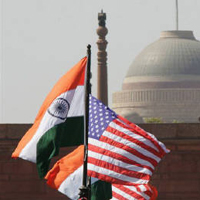 08 November, 2014
Print this article Font size -16+
A senior official of the US State Department will travel to India next week, a visit originally scheduled for January that was postponed due to a dispute over the arrest of Indian diplomat Devyani Khobragade in New York.
Nisha Biswal, the US assistant secretary for South and Central Asian Affairs, will visit Bangalore and New Delhi from March 4-6, the State Department said. It will be her first trip to India since taking up her position last year.
"During her visit, Assistant Secretary Biswal will seek to further broaden and deepen the US-India relationship, which President Obama has called "one of the defining partnerships of the 21st century," the State Department said in a statement.
Biswal would discuss efforts to foster innovation and high-tech ties in Bangalore before traveling to Delhi for talks on defense, security and economic cooperation, it said.
"The breadth and quality of our strategic partnership with India attests to the underlying strength and salience of our relations," Biswal said in the statement.
Biswal had planned to visit India in January, but her trip was postponed as relations between Washington and Delhi took a dive due to the arrest of Khobragade, India's deputy consul in New York.
India was furious about the diplomat's arrest, handcuffing and strip-search in New York after she was accused by US prosecutors of underpaying her nanny and lying on a visa application.
The dispute plunged bilateral ties between countries that call each other "strategic partners" to their lowest point in 16 years before a deal was struck and Khobragade returned to India.
US Energy Secretary Ernest Moniz also postponed a visit in January, but is now due to visit India from March 10-12.
Despite the rescheduled visits, the two countries have clashed in recent days on trade issues, with Prime Minister Manmohan Singh's government reluctant to be seen bowing to US pressure ahead of a May general election.
India has decided to block US investigations into its trade policies and patent laws and prepare for a battle at the World Trade Organization (WTO). There are already 14 past or current WTO cases between India and the United States, whose bilateral trade in goods measured Rs 3,93,348 crore  last year.
A further complication stems from a US decision in 2005 to deny a visa to Narendra Modi, the Bharatiya Janata Party (BJP) leader widely tipped to become the next prime minister.
Modi was chief minister of Gujarat in 2002 when Hindu mobs killed at least 1,000 people, most of them Muslims. Rights groups and political rivals have long alleged he allowed the attacks to occur or actively encouraged them.
Modi has denied this and a Supreme Court inquiry found no evidence to prosecute him.
Officials and analysts say that if Modi becomes prime minister, the United States is unlikely to uphold the visa ban.
The US Ambassador to India, Nancy Powell, met with Modi on February 13 signaling the end of a long estrangement between him and the United States.
The 2013 human rights report on India issued by the State Department on Thursday (27 February) dropped a reference to Modi that had been in the 2012 report.
Tags assigned to this article:
wto news 5 new delhi narendra modi bharatiya janata party nancy powell devyani khobragade ernest moniz nisha biswal