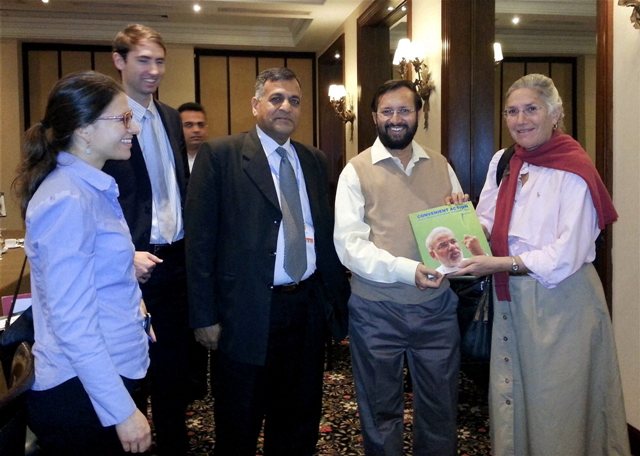 14 January, 2015
Print this article Font size -16+
The crucial UN climate talks in Lima ran into extra time on Saturday as the negotiators from more than 190 countries, including India, struggled to break a deadlock between rich and developing countries to agree on a draft text of a new binding agreement to cut global carbon emissions.
The negotiators, who have been in the Peruvian capital for about two weeks, are grappling to prepare the elements of the draft due to the logjam between developing countries and industrialised nations that haggle over the formula of sharing the burden for cutting emissions, and who should pay.
Peruvian Environment Minister Manuel Pulgar-Vidal, who presided over the December 1-12 talks, was frustrated by the lack of progress and called for constructive exchanges.
"We don't want to leave Lima with empty hands... We are in a time in which we should take decisions," Vidal said.
"We are almost there. We just need to make a final effort. Finding a solution would be a way to show to the world that we are building this process step by step," he said.
The G77 group of developing countries suspect that the text being developed in Lima is an attempt by some rich countries to get round the key concept of differentiation in the 1992 UN framework convention on climate change.
"This whole exercise is not meant to rewrite the convention, this is a firm basic position of the G77," Brazil's representative Antonio Marcondes said.
Developing countries want Western nations to share a bigger burden for the carbon cuts, having started their industrialisation decades earlier.
Rich countries, however, point out that developing giants like China and India are consuming huge amounts of fossil fuels to power their economic growth.
Environmental green WWF said the new draft contains a mixed bag of options.
"It's crunch time for negotiators here in Lima and everything is still up in the air," WWF said.
The climate talks aim to establish the draft text of a new agreement that will be signed by all countries at the next major talks in Paris in 2015 and take effect by 2020.
India is demanding that the key issue of adaptation must be fully reflected in the new climate agreement and developed nations should give enough carbon space to developing nations to achieve sustainable growth.
Tags assigned to this article:
news 9 environment peru climate change developing countries developed countries prakash javadekar lima manuel pulgar-vidal