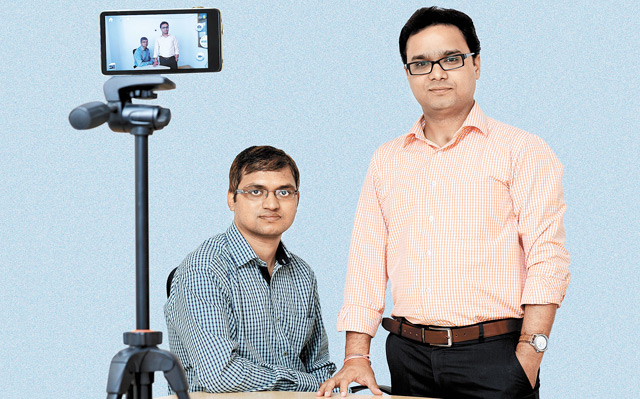 10 March, 2015
Print this article Font size -16+
When Gaurav Sharma, a student from rural Uttar Pradesh, was looking for a good mathematics teacher to help him prepare for the Graduate Aptitude Test in Engineering (GATE), like most young people, he turned to Google. Leading the search results was a website called superprofs.com.
Curious, he visited the portal and found the names of a bunch of professors listed. To his surprise, he also came across the names of teachers in Delhi under whom he wanted to train and learnt that he could watch their lectures on video.
“I could not afford to travel to Delhi and stay there for six months,” says Sharma. “This portal led me to great content and the right teacher.”
The portal was built by five-year-old startup Aurus Network, which connects students preparing for postgraduate entrance exams with the best teachers available. The brains behind Aurus are IIT Kanpur alumni Piyush Agarwal and Sujeet Kumar, whose aim was to build a platform that would enable transfer of videos at low bandwidths.
“Our technology has tackled the problem of streaming video at low latency levels. To this we add the pedagogy provided by private tuition teachers,” says Agarwal, chief executive officer and co-founder.

Idea To Execution
In India, students have to prove their worth in entrance exams to gain admission to a course of their choice. To cross this hurdle they turn to private tutors because most students believe that what is taught in school is just not enough. But there are many who cannot afford to migrate to cities to take tuitions. This is where technology comes in handy.
According to the World Bank, 180 million people in India will access the Internet by 2016. Coupled with Gartner’s prediction that close to 160 million smartphones would have been sold in the country by then, it is easy to deduce why entrepreneurs like Agarwal and Kumar are upbeat about their opportunities.
After dropping out of Stanford University in 2010, Agarwal returned home with the idea of setting up a platform for tutors. “The private teacher’s content is great, but his techniques cannot be scaled beyond a suburb or two without using technology,” he says. Agarwal bounced his idea around friends and was convinced that it could be realised as Stanford too beams lectures for free on its network and on some private video sites.
Agarwal met old friend Kumar in Delhi and requested him to build a platform that would stream videos at low bandwidths. Meanwhile, he approached a top private tutor in Delhi and suggested the idea of beaming his lectures to 10 centres in north India. The teacher, whose name  he was unwilling to reveal, came on board when Agarwal offered to take care of the expenses incurred on the video broadcasts for less than Rs 2 lakh, a figure way lower than the Rs 50 lakh that it cost, on average, for beaming lectures via satellite annually. Universities spend around Rs 6 lakh on broadcasting one lecture on the Internet. The high cost of hiring a studio and video cameras, and ensuring high bandwidth, are also deterrents to the delivery of education via the Internet.
Superprofs uses an Android camera worth Rs 20,000 to capture lectures, compresses them into packets and beams them to different centres.
After receiving an initial down payment, Agarwal persuaded Kumar to join as co-founder and they shifted base to Bhopal. “Bhopal is Piyush’s hometown; it was cheaper to work from home,” says Kumar,  Superprof's (Aurus Network’s) chief technology officer.
Superprofs.com got off to a good start, delivering the first project in eight months. Yet it was not a complete success. “We did not estimate that power cuts could pose problems,” says Kumar. “The product worked,” says Agarwal, “but the teachers didn’t know how to reconnect to the centres after a power cut. It was our mistake; we should have fixed the problem.”
Even though the lecturers were unhappy, they did not take the project away from Agarwal and Kumar.
After this project, other private teachers sought to be a part of the Aurus platform as they wanted more students to enhance their income.
In 2012, Superprofs.com won the Microsoft Biz-Park award, and India Angel Network decided to invest $500,000 in the startup. The money was used to improve video technology on Android and reach out to more teachers.
After getting teachers to invest in Superprofs.com and connecting them to different centres, the company added another business model: connecting students to teachers. Students select their course work and the tutor. They can sign up for a free trial after which they pay up on the website to access a tutor’s content.

A Bright Future
Only 10 per cent of India’s $13 billion private tuition market is organised. There are close to 5,000 organised private tuition centres, which together rake in $1.5 billion. A rough calculation shows that 50 lakh students graduate every year and each of them spends about Rs 18,000 on course work for three subjects per year. Considering this opportunity, Kalaari Capital and IDG Ventures invested $3 million in Superprofs.com. “The use-case is more important: the company helps a segment use technology dynamically,” says Sumit Jain, principal at Kalaari Capital.
(This story was published in BW | Businessworld Issue Dated 23-03-2015)
Tags assigned to this article:
magazine vishal krishna more 4 startup magazine 23 march 2015 aurus network