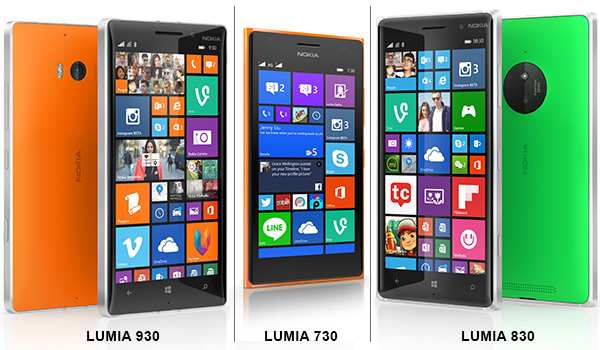 08 November, 2014
Print this article Font size -16+
Microsoft Devices on Wednesday (01 October) launched the recently unveiled Lumia 830 and Lumia 730 running the latest Windows Phone 8.1 operating system. The audience was in for a surprise as the company also announced the Lumia 930 at the event.
"We recognised the potential of the affordable smartphone segment and brought some extremely successful products to the market including the Lumia 520, 525 and the more recent Lumia 630 and Lumia 530.  Building on our momentum in this space, today we introduce three new devices, Lumia 930, 830 and Lumia 730, which we believe will help us consolidate our position in the mid priced smartphone market in India," said Ajey Mehta, Managing Director, Nokia India Sales Pvt. Ltd., a subsidiary of Microsoft Mobiles Oy.
Let's take a quick look at the specs now.
Lumia 730
It is a dual SIM device with a 4.7 HD display. The phone comes with 8 GB internal memory and 1 GB of RAM. Lumia 730 boasts of a 6.7 MP Carl Zeiss camera on the back and a front facing 5 MP camera for those exquisite selfies! Microsoft has put in a 2200 mAh battery under the hood of the phone and it will cost you Rs 15,299.
Lumia 830
This is a 5 inch offering which sports a 5 inch HD display. The amount of RAM is same as the Lumia 730 but the internal memory on-board is 16 GB. The camera has been pumped up too: the primary is a 10 MP Carl Zeiss affiar and the secondary a 0.9 MP one which can record HD videos. Microsoft has priced this phone at Rs 28,799.
Lumia 930
This is a beautifully crafted device and the best thing about this smartphone is the camers. Lumia 930 has a 20MP PureView camera and advanced Rich Recording, ensuring a flawless video and imaging experience with Living Images and optical image stabilization. Apart from the camera, the phone features a FULL HD 5 inch display and a solid 2 GB of RAM. Lumia 930 will be available in India starting October 15, 2014, at Rs 38,649. Quite a hefty price for the specs on offer!
Microsoft Got More To Offer
At the event, Microsoft also announced the Denim update for its Lumia series. It features live folders, SMS merge,  forwarding and mobile web site improvements in IE. Lumia Denim will be available on both Lumia 830 and Lumia 730 at sales start while it will roll out as an over-the-air update to all the other Lumia smartphones in Q4, 2014.
Tags assigned to this article:
banking news 7 epfo k k jalan uan ifsc