By Joymala Bagchi
Kolkata (West Bengal) [India], February 13 (ANI): With politics intensifying in West Bengal ahead of the upcoming assembly elections, the state's approximately 250-year-old art form "Patachitra" (cloth-based scroll painting) depicting mythological anecdotes has refashioned with political figures in synergies.
The skilled artisans belonging from West Midnapore can be seen painting images of Prime Minister Narendra Modi and West Bengal Chief Minister Mamata Banerjee-- descending from a helicopter, addressing political campaigns, amid the crowd, and continuation of such minute details, in a step by step depiction.
While painting one of the political campaign scenarios, Salma Biwi one of the artisans observed, "West Bengal is buzzing with election fervour now. Keeping this intensity in mind we thought of introducing vote culture even in Patachitra, hence we began painting various political scenes or events. However, we are focusing mainly on our Prime Minister and Chief Minister." 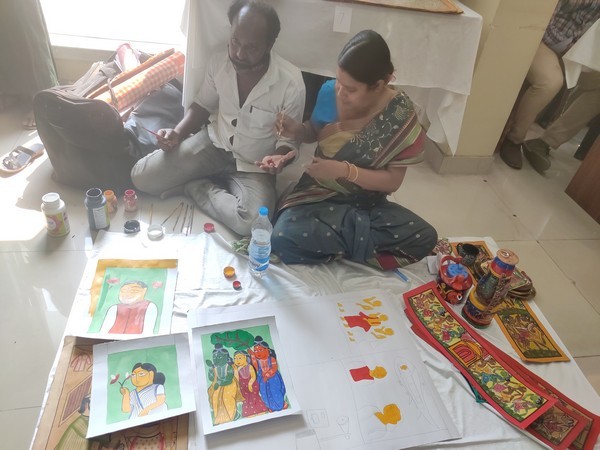 Another artisan Sheik Shuvan (Salma Biwi's husband) said, "Patachitra means depicting scene after scene of any incidents or stories. We have attended a few political rallies and thus we paint based on our experience. We are hoping that this will interest people to come to see our work."
Though the art forms are adapting to modernization in the ever-changing world moving towards globalization, the local art forms often receive fewer buyers and even poorer monetary upliftment.
However, if given proper platforms, art forms attract the patron and collectors alike. An online firm Prattya.com is doing just that by organising a handicraft fair in Rabindra Sarobar, South Kolkata for Patachitra artisans, and giving them a platform to showcase their talent.
"The main idea behind this exhibition is to gather a crowd. We are hoping that people visit us. This will encourage artists a lot," said Surajit Nayak, the initiator, and CEO of Prattya.com.
Juxtaposing with political figures and scenes, the handicraft fair also showcases traditional painting of Ramayana and other mythologies. (ANI)