Traders Assure Sheila That FDI In Retail To Be Resolved 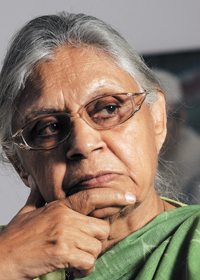 08 November, 2014
Print this article Font size -16+
A number of traders' associations on 25 October' 2012 assured Chief Minister Sheila Dikshit and Union Minister Kapil Sibal that they were ready to resolve the issues relating implementation of FDI in retail in Delhi through talks.
The associations, including the Confedration of All India Traders (CAIT), have been strongly opposing FDI in multibrand retail alleging it will badly hit small retailers.
In an interaction with Dikshit and Sibal, the traders, including representatives from CAIT, have expressed readiness to hold talks in resolving the differences through talks.
Sibal suggested resolving the issues through talks and the traders, led by CAIT National General Secretary Praveen Khandelwal, accepted the offer, officials said.
Keen to take the lead in attracting FDI in multibrand retail, the city government has already announced making amendments to the Agricultural Produce Marketing Committee (APMC) Act to allow direct connectivity between retailers and farmers.
Sibal, who represents Chandni Chowk constituency in Lok Sabha, took the traders to Dikshit for discussion on certain issues relating to payment of Value Added Tax by them.
Dikshit, on a request of the traders , agreed to form a committee to examine the grivances of the traders relating to payment of VAT. The committee will comprise representatives of traders' association besides senior officials of the government.
Exhorting traders not to resort to tax evasion, Dikshit said collection of VAT is crucial for the development of the city. Khandelwal assured the traders would render extend cooperation in meeting the target of VAT collection.
Khandelwal, while appreciating the "positive attitude" of Dikshit and Sibal in resolution of certain VAT-relaed issues within the shortest possible time, demanded settlement of the difficulties relating to Form 32 and 33.
In the interaction, Dikshit announced the date of submission of Form C2 has been extended upto December 31 as requested by the traders.