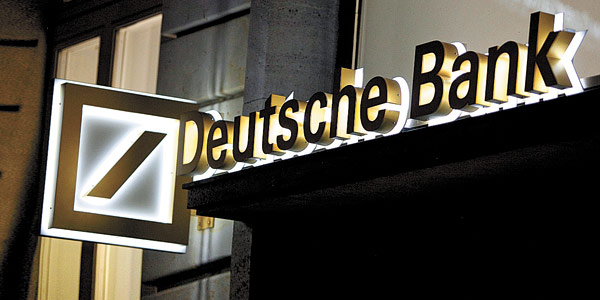 08 November, 2014
Print this article Font size -16+
The world’s biggest banks have to boost their capital by €115 billion to comply with tougher rules, and 61 per cent of that shortfall is at European Union (EU) banks, where lenders have been the slowest to comply. The Basel Committee of global regulators said the capital shortfall fell by €83 billion during the second half of last year as banks retained more of their profits and raised capital, although the pace of improvement in Europe was not as quick as it was elsewhere. The shortfall at EU banks was cut by €29 billion in the second half of 2012. Banks have been under pressure to comply with the global Basel III accord to dispel doubts about their ability to thrive and encourage investors to buy their bonds and shares. The most affected are HSBC, JP Morgan, Citigroup and Deutsche Bank.

Growth Tidings
Business activity in the euro zone grew faster than expected in September as new orders came in at their fastest pace in over two years, recent surveys showed, adding to signs that the economy was healing. The surveys suggest the region’s economic recovery was becoming more broad-based, with growth in both Germany and France, the bloc’s two largest economies. Markit’s Flash Composite Purchasing Managers’ Index jumped to 52.1 from August’s 51.5, its highest since June 2011, beating expectations of 51.9. A reading above 50 indicates growth.

Buying Time
Italy’s third biggest lender Monte dei Paschi di Siena has delayed approval of a restructuring plan in the hope that the European Commission will give it more time to raise a planned €2.5 billion, according to sources. The issue is crucial in determining the bank’s future because the commission has said that if the bank cannot raise the funds on the market, the government will have to convert its loans to the bank into equity, effectively nationalising it.

Monte dei Paschi was brought close to collapse by the euro zone debt crisis and most analysts say it could struggle to lure private investors to its planned cash call. At €2.5 billion, the capital injection requested by Brussels is more than twice the amount originally pencilled in by the bank and roughly equal to the bank’s current stock market value. The fundraising will have to be carried out within 12 months of the plan’s approval by the European Union.
Extra Cover
Americans will pay an average premium of $328 a month for a mid-tier health insurance plan once the Obamacare health exchanges open for enrolment on 1 October, and most will qualify for government subsidies to lower that price, according to the Obama administration. The figure, based on data for approved insurance plans in 48 states, represents the broadest national estimate for how much Americans will pay for health coverage under US President Barack Obama’s healthcare reform law next year. The prices of the new plans are at the heart of a political debate over whether they will be affordable enough to attract millions of uninsured Americans. Prices were lower in states with more competition among insurers and higher in states with fewer players, said a report from the US Department of Health and Human Services.

Game On
Grand Theft Auto V (GTA) has crossed the $1-billion sales mark within three days of its launch in stores, a rate faster than any other video game, film or other entertainment product has ever managed, its creator Take Two Interactive Inc. said. The latest instalment of GTA, a cultural phenomenon that has sparked debate on adult content and violence, received strong reviews and racked up a record $800 million in first-day sales alone.

Flying Orient
Airbus has landed deals with Chinese companies for almost 70 aircraft worth around $6 billion, as it increases its footprint in what it expects will become the largest domestic aviation market. The European aircraft maker, which is battling rival Boeing in a market it sees surpassing the US (by passenger numbers) within 20 years, has also unveiled a “regional” jet aimed at China. Domestic travel grew almost 10 per cent last year in China, compared with less than 1 per cent in the US, according to the International Air Transport Association.

Like! Comment? Share?
A small selection of people in China will finally be able to access banned sites, including Facebook, Twitter and other ‘politically sensitive’ links. Access to Facebook and Twitter has been blocked in China since 2009 following riots in the country. The ban will be lifted by the government in the Shanghai Free Trade Zone (FTZ), the South China Morning Post reported — a move that has been popularly dubbed the “Internet Concession”. The idea of unblocking websites in the FTZ was to make foreigners “feel at home”, the report said.
More Cuts
Japan’s government will reportedly include more than $14.1 billion in corporate tax cuts in an economic stimulus package intended to offset the blow from planned sales tax hikes. The tax breaks, worth 1.4 trillion yen, will be part of a 5 trillion yen economic stimulus, as PM Shinzo Abe gears up to approve an increase in the sales tax needed to pay for welfare spending. The sales tax hike is the biggest effort in years by Japan to contain public debt of over $10 trillion.

Growth Track
Russia reopened a 54-km railway link with North Korea, holding out the prospect of increased trade for the reclusive nation with its biggest neighbours after years of international sanctions. North Korea has reached out to Moscow and Beijing for help to fill the gap left by the drying up of South Korean and US economic assistance. The track would be used to export coal and import goods from South Korea and other Asian countries.