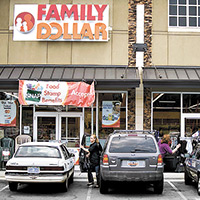 08 November, 2014
Print this article Font size -16+
Dollar Tree has agreed to buy rival discount chain Family Dollar Stores for $8.5 billion to fend off growing competition from Wal-Mart Stores and fellow discounter, Dollar General. Dollar stores have struggled in a weak US economy as Wal-Mart and other large retail chains chase penny-pinching consumers by offering more items priced at $1 or less. The deal will give Dollar Tree more than 13,000 stores across the US and Canada, vaulting the company ahead of Dollar General to become North America’s biggest discount retailer, with more than $18 billion in annual sales.

Homing In
Online real estate website Zillow has bought rival Trulia in a $3.5 billion stock deal that merges the two main firms in the sector. “Consumers love using Zillow and Trulia to find vital information about homes and connect with the best local real estate professionals,” Zillow chief executive Spencer Rascoff said. “This is a tremendous opportunity to combine our resources and achieve even more impressive innovation that will benefit consumers and the real estate industry.” The combined company will maintain both the Zillow and Trulia consumer brands, and provide listings for home and apartment sales and rentals. The boards of both firms approved the deal, expected to close in 2015, according to a joint statement.

Dark Deeds
Germany’s Deutsche Bank and Switzerland’s UBS said they were caught up in an inquiry by US regulators, who are looking into whether broker-run stock exchanges gave an unfair advantage to high-frequency traders. The investment banks said they were cooperating with inquiries. The two also face class action suits that allege they violated US securities laws, allowing high-speed traders to make a profit at the expense of institutional investors such as pension funds. UBS said in its second-quarter earnings report that it was responding to inquiries from US authorities over the operation of its ‘dark pool’.

had imported products from Shanghai Husi Food, the US-owned Chinese company at the centre of a food safety scare in China. The food scandal broke after a report showed staff at Husi Food using long expired meat and picking up food from the floor. In Japan, McDonald’s said it would halt all imports of chicken products from China and shift that business to Thailand, boosting purchases from McKey Foods Services, a unit of Keystone Foods, and Cargill Thailand.

Security Upgrade
BlackBerry is buying a privately held German firm, Secusmart, that specialises in voice and data encryption, in a bid to burnish its credentials with highly security-conscious clients like government agencies. The Waterloo, Ontario-based smartphone maker did not disclose the terms of its deal to acquire Secusmart, which specialises in encryption and anti-eavesdropping services for governments, companies and telecommunications service providers. The acquisition is the latest by the smartphone pioneer to build on niche areas in an attempt to reinvent itself under new chief executive John Chen.

Bigger Footprint
UK’s BSkyB will pay $9 billion to buy Rupert Murdoch’s pay-TV companies in Germany and Italy, taking its hunt for growth into Europe by creating a media powerhouse with 20 million customers. Under the deal, BSkyB will pay Murdoch’s 21st Century Fox for the pay-TV companies using cash, debt, a stake in a TV channel and the placement of shares that represent around 10 per cent of its issued share capital.

Speed Breaker
General Motors recently announced six recalls covering 717,950 vehicles in the US for varying reasons, although none were related to ignition switch issues. GM has already recalled nearly 15 million vehicles this year for potentially lethal issues with ignition switches. In a separate move, GM wants to put nearly a fifth of its workers at a factory in Brazil on paid leave, a workers union said, amid falling output in Latin America’s largest economy. Calling the move “unnecessary”, the union said 1,000 workers in Sao Paulo state could be laid off.

Window Of Mistrust
Microsoft appears to be the latest US company to be targeted by China for anti-trust investigations after officials from China’s state administration for industry and commerce paid sudden visits to the software firm’s offices in Beijing, Shanghai, Guangzhou and Chengdu. The Chinese agency declined to comment on the visits. A Microsoft spokesperson said the company was “happy to answer the government’s questions”, but declined to give any further information. A source close to the company said the visits were most likely a preliminary step ahead of an anti-trust investigation.

Rebuilding Brand
Reeling under the pressure of two catastrophic aviation tragedies, Malaysia Airlines is likely to change its name as part of a radical overhaul and restructure routes in a bid to repair its reputation. The Malaysian flag carrier, majority-owned by the government, is also seeking new investors to rebuild its business. Work has already started on a strategic review that will restructure the airline’s routes, according to sources.

Tit For Tat
Russia announced a ban on some fruit imports from the European Union and chicken from the US, even as

Brussels considered slapping tighter sanctions on Moscow over the Ukraine crisis. An advisor to the chief of Russia’s food and agricultural inspection service Rosselkhoznadzor said oriental fruit moths had been detected in some European imports. The larvae of the moths feed on the cores and pits of fruit.

Stiff Penalty
An international arbitration court ruled that Russia must pay $50 billion for expropriating the assets of Yukos, the former oil giant whose ex-owner Mikhail Khodorkovsky fell foul of the Kremlin. Finding that Russian authorities had subjected Yukos to politically motivated attacks, the panel made an award to a group of former Yukos shareholders that equates to more than half the entire fund Moscow has set aside to cover budget holes. Russia, whose economy is on the brink of recession, said it would appeal the ruling by the Holland-based panel, which judges private business disputes.