Toast To The Perfect Match 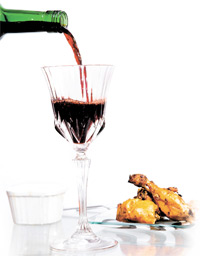 The most common old-style guideline everyone — from catering college graduates to new wine converts — believe in is the "red meat with red wine and white meat with white wine" rule. But in terms of Indian cuisine, where the gravy or the sauce determines the flavour of the dish, not the underlying meat (or vegetable), it's a rule you can't always live by.

Having said this, there are still some basic combinations that you can try. The German Rieslings are a safe bet always with Indian food. Restaurateurs and managers like Pravesh from Shiro, who experiment a lot with wine, recommend that you try lamb cooked in a  creamy or chilli sauce with a heavy-bodied Cabernet Sauvignon, fried fish with a drier chardonnay, fish in a tomatoey sauce with perhaps a Spanish red, a heavy-bodied Pinot Noir with rogan josh, but a sparkling wine with butter chicken!

Obviously, the food and wine should complement rather than kill off one another. So try to match a spicy dish with a spicy wine. But you have to take care not to destroy a perfectly fine high-quality red with overwhelming spice/chilli in the food.

In the meanwhile, try out these combinations:

Anoothi is a Delhi-based food critic and travel writer