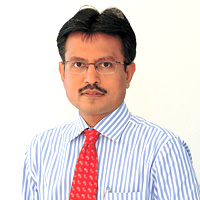 Let us first evaluate the global scenario. The US is doing well at the moment, thanks to a massive Fed support in the second round of quantitative easing. High unemployment rate and high fiscal deficit will keep the US on tenterhooks for some time. It is difficult to figure out what is happening in China, but it is sufficient to assume that there is reasonable doubt among investors about the sustainability of growth. Europe has a short-term respite from debt problems but, in the near future, there will be a price to be paid for austerity measures imposed. Overall, while money may flow from emerging markets to developed markets for a quarter or two, it does not look sustainable. Eventually, flows will start moving back to emerging markets in search of growth and return. FIIs are likely to behave like MNCs such as Hindustan Unilever or Coca-Cola, who have become part and parcel of emerging markets.

From an Indian point of view, inflation is the nightmare for policy makers. Higher oil prices are accentuating the problem further. The pressure is not only from monetary side, but also from the supply side.

As India is slow in creating capacities, supply-side constraints come into play after two or three years of rapid growth and keep inflation elevated for a while. While inflation is bad, it is a good problem to have in a deflationary world. Eight per cent growth and 8 per cent inflation is better than 2 per cent growth and 4 per cent inflation. Wastage reduction and stringent action against hoarding can bring short-term relief. Inflation is likely to be a longer term issue and is unlikely to be settled on a permanent basis unless we can create capacities on the scale and speed of China. The current market correction has priced in some amount of inflation scare. Any further correction along with some respite on inflation (maybe through base effect) can provide good opportunity to invest.

The Reserve Bank of India (RBI) will raise policy rates in 2011; however, the market has factored in the same. And rising rates are unlikely to have material impact on corporate profitability or stock valuation.

Events in the Arab world will certainly raise the benefits and subsidy budget in those countries. That increase can permanently push up the oil prices by few dollars or tens of dollars depending upon what happens in Saudi Arabia and Iran. Oil prices rising due to stronger global growth like in the last cycle and oil prices going up due to geo-political reasons as it happens right now are quite different. Higher oil prices hit India hard on current account as well as fiscal side. Movement of oil prices in the nearterm will significantly impact Indian equity markets. Higher oil prices constrain global growth and in turn bring down demand for oil resulting in softening of oil prices over a period.

True, scams and corruption are regrettable  per se; but they are nothing new in India. Investors had a pretty good idea about the extent of corruption in India. Here, the age-old problem of India in not marketing itself comes into play. Successful completion of CWG games and 3G auction should have been highlighted as much and more against the corruption news on 2G and CWG.  Investors are smart enough to realise that corruption is a universal problem and is on the decline in India except in government contracts, real estate and mining sector. Judiciary and press act as a watchdog on corruption and provide a balancing factor.

The FY12 budget can act as a sentiment booster if it can raise revenue through spreading of tax nets on non-salaried Indians and reduce the leakage in the government expenditure through corruption and inefficiency. FIIs pumped in more than $29 billion in 2010 to pull the Sensex up by 17 per cent.  They brought Sensex down by 15 per cent by selling a little under $2 billion in 2011. Erosion in domestic investor base through institutional avenues such as mutual fund or insurance, and retail market through direct investment has made such extreme volatility a part of our equity markets. Investors should use such volatility as an entry point, rather than get intimidated by it through asset allocation.
Sensex at 17500 levels is trading just a little below its historical average. It is fairly discounting the concerns on oil, deficits, inflation and FII outflows. It is difficult to predict what happens to the market in the short term. I will recommend investors to do an asset allocation like this to take advantage of volatility. Obviously, they will have to give sufficient time for sentiments to change and markets to recover.

Short-term interest rates are running at high levels as liquidity is tight and inflation scare is persisting. Yield curve is very flat and the direction of medium- to long-term interest rates looks to be upward from the current level of 8.10 per cent on 10-year gilts.

In such a scenario, it will be better to put debt allocation in bank deposits of up to five-year maturity if you are not a tax payer. And if you are a tax payer, the one-year fixed maturity plan will be a better bet due to lower expense ratio and indexation benefit. The medium- to long-term allocation of debt can be kept for retail bond issuances by banks such as SBI, which offers the best combination of highest credit and good rates.
Investors should be careful in investing in commodities such as gold and silver, which are getting a boost due to global uncertainty. While there is no doubt about the long-term bullishness of commodities, better time to invest might be when the current spike is missing.