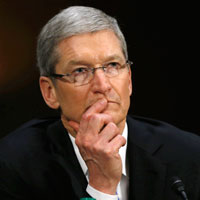 08 November, 2014
Print this article Font size -16+
Burberry CEO Angela Ahrendts rebuilt the brand after over-exposure of its trademark pattern alienated wealthy clientele. Her approach: to embrace digital innovation, build a strong online business and tap Chinese and Latin American markets. Now Apple Inc is hoping she can do the same at the world's most valuable technology company.

In poaching Ahrendts to direct strategy, expansion and operation of its retail and online stores, Apple CEO Tim Cook has set her the task of bolstering global iPad and iPhone sales and returning some lustre to the Steve Jobs-created brand which has not launched a major new device in almost four years.

Apple's profit fell 22 per cent in the June quarter as gross margins slid below 37 per cent from 42 per cent a year earlier and its shares, down more than 30 per cent since September 2012, are being pummelled by fears of slowing growth, and competition from Samsung Electronics.

"The point of Apple retail is to sell Apple, not to sell Apple products," said Benedict Evans, who covers mobile and digital media at Enders Analysis, a research consultancy.

"What they've got is somebody who can take 400 stores with really great premium positioning and turn that into 800 stores and do that in China, and do that in India and do that in Europe and in Russia and in South America and everywhere else which at the moment they don't really have."

Jumping to Apple - whose $157 billion net sales are nearly 50 times those of Burberry - is a challenge of a different proportion for Ahrendts. The pressure is made all the more intense by Cook's previous stumble hiring a retail star from the UK market.

John Browett, chief executive of consumer electronics retailer Dixons, was appointed by Cook in 2012 to lead the iPad and iPhone maker's global retail expansion. But Browett left after just six months and later said he had not fitted in with the business culture at Cupertino, California-based Apple.

Ahrendts' digital experience means she is likely to have an easier time adapting. While at Burberry she launched a website dedicated to the firm's traditional trenchcoats and introduced webcast catwalks, using the new iPhone5S to shoot the entire spring/summer 2014 show. She also collaborated with Google for a brand campaign named Burberry Kisses.

Strategic Vision
"Clearly she has good strategic vision; she understands and talks digital," said John Guy, an analyst at Berenberg in London. "Under her stewardship Burberry has done well, there has been a lot of organization in terms of the backend in sourcing supply and replenishment."

One of Ahrendts' main challenges will be to boost Apple's sales in China, its second-largest market. Here, analysts say, she will be able to draw on her Burberry experience of introducing less expensive goods without damaging the value of the brand.

Apple launched a cheaper plastic iPhone last month to help make up ground in emerging markets to rivals like Samsung Electronics and Huawei Technologies. Analysts said the phone - still more expensive than many of its rivals' models - was not cheap enough.

"Part of her role from a retail point of view will be to ensure that that kind of premium or added value level that Apple is seen to represent remains intact," said Neil Saunders, managing director of retail consultancy Conlumino.

"The trick is to allow people to buy into the product and make it as mass market as possible, because you want the volume and the sales, but you don't want that to come at the expense of the cachet of the brand." ($1 = 0.6244 British pounds)