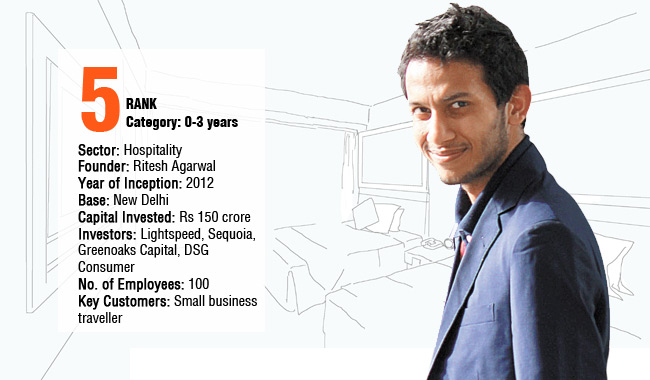 09 June, 2015
Print this article Font size -16+
At the tender age of 21, youngsters have a case of post-college blues, wondering what to do with the rest of their lives. That certainly didn’t hold true for Ritesh Agarwal, who not only skipped the college part, much to his family’s chagrin, but was India’s youngest CEO by the time he was seventeen. Ironically, he authored a book on colleges The Encylopedia of Indian Engineering Colleges available on Flipkart. Impressively, he was the only Indian to win a Thiel Fellowship, which meant being “paid not to go to college”, receiving funds, guidance and meeting some of the world’s top CEOs.

No wonder Agarwal exudes more confidence than you’re likely to see in the most seasoned CEOs. He doesn’t miss a beat and invariably knows exactly what to say. This precocious youngster from a small town in Odisha is as city-slick as they come and is busy taking many cities by storm with his branded network of insta-stay hotels, Oyo Rooms.

Download the Oyo Rooms app, choose your destination from across over 16 cities, and in three clicks, you are booked to stay, starting Rs 999 a night with an assured level of quality.

But why budget hotels, over all the options available to a young person with the world before him? Agarwal traces the birth of the idea that became Oyo Rooms to a fight over the TV remote and not being able to watch the shows he wanted. Being locked out of the house late nights was another trigger. More than once in his life he wished he had a good place to stay at short notice. Good hotels were, of course, exorbitant and affordable ones so bad they weren’t worth the while.

“So for me it was very simple,” says Agarwal. “India has this huge traffic moving about, coming off of trains and buses and cars, and nobody has an affordable and yet delightful place to stay.” Clearly, a problem to be solved.

The answer lay in technology. Agarwal was a coder by the age of eight and it was to tech that he turned when setting up his business. He decided to begin with one hotel, work on quality and get people talking. Having tried an Airbnb-style business, Oravel and gone quite broke, Agarwal remembers being thrown out of his Masjid Moth, Delhi flat and being stuck on the stairway with his belongings. Help arrived in the form of funding to the tune of Rs 150 crore from Lightspeed, Sequoia, Greenoaks Capital and DSG Consumer. Agarwal, and partner Abhinav Sinha, with a products and services background, registered Oyo Rooms in 2012 in Delhi.

Often described as the Ola for hotels, Oyo Rooms is a network of hotels that doesn’t actually own any. Instead, it identifies small properties and brings them up to a certain quality of service and ensures a checklist of features such as basic supplies, free Wi-Fi, free breakfast, and meals from the kitchen are available.

All-important is the Oyo app, through which all guest traffic is fed to these hotels. Oyo gives the hotel its brand name and takes an undisclosed cut. Managing the network is done via an internal tracking system that allows costs that would have been spent on supervisors to be eliminated. At this stage, the company is in an invest-and-expand mode, though the annual turnover is pegged at Rs 63 crore. It’s listed with travel aggregators such as MakeMyTrip, Expedia and ClearTrip, helping it get to its target — the small business traveller.

By year end, Agarwal aims to go from 350 hotels and 4,000 rooms to 1,000 hotels. From there, he has his eye on a figure of 100,000 rooms in India. Undoubtedly, Oyo has created a stir in the hospitality industry with its tech-enabled model, but will it disrupt the hotel business? Achin Khanna, MRICS, managing director of HVS South Asia, doesn’t quite think so. “Oyo Rooms and other similar business models are intriguing. It may be too early to claim that they are acting as disrupters in the ‘traditional’ hotel industry,” he says. “But, it’s not too early to recognise that they are influencers in the consumers’ minds when it comes to making a lodging decision. Adding scale will be the key to success of this model and creating a compelling value proposition that goes beyond simply offering a cheap room rate will be equally critical. Traditionally owned and/or managed hotel brands as well as new age aggregator model based brands can and will co-exist.”

All the same, Oyo Rooms does have plenty of competition, including Ginger Hotels, Ibis Hotels, Peppermint Hotels, and Zo Rooms with which it’s involved in fisticuffs in court. Customer feedback is mixed, some claiming the Oyo experience to be “decent and 3-star-like” and others complaining they turned up to find their booking hadn’t been accepted.

Agarwal isn’t concerned. Like most startups in new areas he believes it opens up the market. His biggest challenge is instead finding talent and training hotels to get up to standard and stay there in readiness for the future.