Thinking Out Of The Box 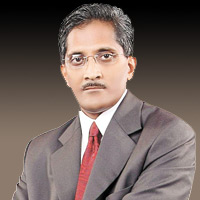 When UST realised that hundreds of its employees were not switching off their computers when leaving office, it developed an in-house application called PowerUS. It is an energy-management tool that eliminates wastage of power on computers without disturbing existing IT administration processes or without impacting critical user applications and data. "Some of our employees tweaked it further so that PCs could boot up in the morning just before they arrive. Also, they provided for permanent exclusions for workstations from servers thus preventing any impact on critical stuff which need to function round the clock."  says Gopalan. The company has sold the application to several large enterprises as a feature. "While this might not look like a leapfrog innovation, it is useful, practical, money-saving and it is a green innovation," he adds.

Similarly i-Safe is a mobile application helpful to people in a panic situation. With a single button the application on the mobile gets activated and continuously provides location-tracking through SMS updates. "The Kerala police have already expressed interest in this application which can be installed on feature or smart phones and there can be many more uses for this. Again, this is a small example of how we try to think out of the box," says Gopalan.

UST hopes that innovations such as these applied to the services industry will help it retain its edge against larger players.