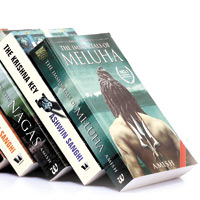 08 November, 2014
Print this article Font size -16+
It has no connection with Westland helicopters, but the book publisher of the same name is a high-flyer too. Early this month, the company sold more than 350,000 copies of The Oath of the Vayuputras through pre-launch bookings alone. Now, Amish Tripathi (finance professional-turned-author of the Shiva Trilogy — The Immortals of Meluha, The Secret of the Nagas and The Oath of the Vayuputras) has been given a record advance of Rs 5 crore — the biggest ever from an Indian publisher — for a novel series that he hasn’t even finalised.

Today, Westland Limited, a subsidiary of Trent (part of the Tata Group), which was mainly a book distributor till four years ago, is among the top five publishing houses in India by sales and, in the top 10 in terms of value, according to estimates by consumer insights firm Nielsen.

In the second half of FY13, Westland opted out of third-party distribution: it will only distribute titles it publishes or co-publishes. It expects publishing revenues of Rs 23 crore in FY13, and to be in the black by FY14.

It’s early days yet, but Westland’s feat is by no means small; it’s taking on international publishers like Penguin, Random House and HarperCollins that have dominated Indian publishing and control close to 45 per cent of the market.

Westland’s strategy involves signing on promising authors, like Tripathi — and to think they initially rejected The Immortals of Meluha — keeping prices low and using a combination of aggressive marketing to promote its A-list and its distribution expertise to pump up volumes.

Rashmi Bansal, the author of Stay Hungry Stay Foolish (it sold more than four lakh copies) is also on Westland’s list. Bansal too had published her first book outside Westland. “There are many authors who you feel will do well and they don’t,” says Gautam Padmanabhan, CEO of Westland. “There are others who surprise you.”

Ask Tripathi about first being rejected by Westland and he’ll only say, “They did not publish the first edition of The Immortals, but they were key to our success as they distributed the book.” Which begs the question: What changed with Westland, and where do they go from here?

The First Draft
Westland was not set up with the intent of being a publisher, but as a family-run business, East West Books, that distributed books. In the mid-1990s, East West got into a joint venture with bookstore chain Landmark, another family-run business (thus the name Westland). The JV was to import and distribute book titles from the US. In 2004, the Tata Group invested in Landmark, through its retail arm, Trent, bringing all Landmark JVs, including Westland, under the Tata umbrella. East West and Westland were then merged to create Westland Ltd. By then, Westland had become one of the larger distributors in India.

Until 2008, distribution grew steadily. Westland went from being a regional distributor in south India to establishing a national presence, with offices in Delhi and Mumbai. At the same time, organised book retail chains like Oxford, Odyssey, Landmark and Crossword were on an expansion drive too.

But as more foreign publishers started setting up shop in India, distribution took a hit. “They became sole importers for their parent companies and, instead of going direct to retail, used the existing distributor network. That only added one more layer to our existing distribution network,” says Padmanabhan.

In an increasingly challenging environment, Westland began to gradually cut back on its distribution. “That’s when we decided to see if we could focus on publishing,” says Padmanabhan.

Westland picked up some early lessons. The first wave of Indian writing in English was largely restricted to literary fiction — authors like Vikram Seth, Arundhati Roy and others had achieved fame elsewhere. As Padmanabhan points out, there was no writing that generated commercial returns in India. However, readers were willing to buy authors like Chetan Bhagat; his inaugural novel, Three Point Someone, broke many records. “These writers were using the English they would speak,” says Padmanabhan. “There was an instant connect.”
break-page-break
A little over two years ago, when Nielsen began recording book sales, it discovered that authors like Ravinder Singh, Durjoy Dutta and others (including Bhagat) were actually outselling many of what the publishing industry perceived as best-selling authors of those times. “Publishers had to then figure out how to adapt,” says Padmanabhan.

Westland first signed up authors like Tripathi and Bansal who had launched their first titles with relatively unknown publishing houses, but still managed to deliver impressive sales numbers. Then, it targeted the middle of the market. “International publishers had taken the premium section, while Indian publishers had opted for mass market. Westland has clearly opted for a mid-market pricing strategy,” says Sivaraman Balakrishnan, head, marketing, at book retailer, Crossword. Padmanabhan concurs. Though Westland focuses on literary fiction with an imprint called Tranquebar, it feels there is huge scope in commercial fiction and non-fiction that it can focus on.

But it does not spread itself thin. Publishers like Penguin and Random House launch hundreds of new titles every year in India. Add international titles and the number could run into thousands, says one international publisher. Westland’s strategy has been to look at potential. “Instead of publishing 100 titles where the print runs are as low as 2,000 copies per title, we would rather publish 30-40 books, some of which would be large bestsellers,” says Padmanabhan. Westland’s experience as a distributor helps.

Others dispute Westland’s ability to understand the market; it did say no to Tripathi’s first novel. Many authors who have worked with Westland say that the firm lacks the bandwidth to look beyond its top authors. “They do not bother promoting their newer authors,” says one who switched, and then saw a dramatic spike in sales. “I don’t think any publishing house can claim that it is perfect with all authors. But we have managed to have great working relationships with all our major authors,” says Padmanabhan. Tripathi and Bansal agree. “It’s not a one-way street but a partnership,” says Bansal.

Marketing Title
Once upon a time, marketing individual titles didn’t give enough returns to justify investments. “The idea was to put books in stores and let word of mouth and a few reviews help in pushing sales,” says Padmanabhan. Westland has turned that argument on its head by opting for aggressive marketing.

Take Tripathi: the sales numbers from his earlier two books had been spectacular. “We felt there was scope for increasing even those numbers. In the Indian market, it’s very difficult to actually say that this is the limit. The market is just about maturing,” says Padmanabhan.

Other publishers are also getting aggressive. “Random House has been putting big advertising budgets behind its titles in the last 12 months,” says Caroline Newbury, VP, marketing and publicity, at Random House.

Random House is pushing star authors like Jim Grant (pen name Lee Child) and James Patterson. Mewbury says few people in India were aware of Jack Reacher, the protagonist of the Lee Child series. So, for the 17th book in the Jack Reacher series, A Wanted Man, Random House took to advertising in bus shelters and auto-rickshaws.

Westland admits to taking some marketing lessons from its top authors. Ashwin Sanghi, the author of The Rozabal Line and The Krishna Key has been extremely successful in using social media to market his titles. Then, Tripathi’s wife came up with the idea of distributing sample chapters of his first book free to customers at large book retailers.

The idea was an instant hit, with retailers stocking the free sample at the cash counter — as prime a spot as it gets. “Otherwise, first-time authors from relatively smaller publishers are buried somewhere inside the store. They are a well-kept secret even from store staff,” says Tripathi. Westland borrowed one of Tripathi’s ideas and did trailer films for his novels. While he released the trailer of his first novel on YouTube, Westland launched a trailer film for the second novel in movie theatres. For the Oath of the Vayuputras, it first invested in a music video and produced a single track sung by Sonu Nigam. Later, Times Music put together a full- length CD with several tracks.

Westland is not missing out on augmenting non-book revenues either. It has tied up with entertainment and sports marketing firm CAA Kwan in an exclusive arrangement in which CAA Kwan will market Westland’s titles as potential film scripts to movie makers. It might just work. The Hindi film industry is turning to successful books for film scripts, Three Idiots, Kai Po Che, Shootout at Wadala, Khelenge Hum Jee Jaan Se being a few examples.
Westland The Tide...
Apart from Tranquebar, Westland has joined hands with Sayoni Basu who ran children’s publishing house Scholastic and musician Anoushka Shankar for Duckbill, a children’s publishing imprint. “Children are one of the fastest growing segments within publishing. There was a need to address that segment,” says Padmanabhan. Westland set up the JV about six months ago. The children’s imprint will initially publish 20-25 titles in the first year.

Westland has a co-publishing programme as well, tying up with smaller publishers who might not have the distribution or marketing muscle. The latter do the initial work of identifying and signing on the author. Westland does the production, marketing and distribution. “Some are on cost- and profit-sharing basis,” says Padmanabhan. “In others, we simply pay the author’s royalty and the expense and profit component of the publisher.” Westland currently has three active co-publishing ventures with Grey Oak, Three Rivers Press and Blaft.

Westland is also looking beyond organised retail, which is going through its own problems, and online retail that hasn’t yet taken off either. The publisher is exploring the possibility of selling books at non-traditional outlets; the company has just started an experiment with Café Coffee Day where books will be retailed through cafes. With Godrej’s Nature’s Basket, Westland already markets cookbooks that blend in perfectly with the high-end speciality food chain. Padmanabhan says he is quite happy with the results.

Westland is also looking for partners in salons and spas. “In a market like India, non-traditional retail could be a game-changer,” says Padmanabhan. Large retail chains like Tesco are among the UK’s biggest book sellers. They stock only the top 5-10 bestsellers which consumers already know about and hence do not need anyone to specifically man the counters. Westland clearly wants to take a leaf out of that book.