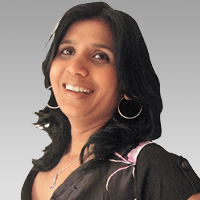 
Three years ago, Janah, born to a Malayali father and a half-French, half-Belgian mother who left Kolkata for the US three decades ago, started Samasource, a company that outsources work from tech companies to far-flung rural communities in India and Africa.

In 2010, Samasource got contracts worth $1 million with tech companies such as Benetech, LinkedIn, Intuit, Ask.com and Google, and provided work to 800 people around the globe — from Ranchi to Dadaab's refugee camp in Kenya to Haiti.

Rather than relying on scale or concentration, Janah realised that large business process outsourcing (BPO) tasks could be divided into many small pieces of work —dubbed "micro-work" — creating a kind of digital production line where workers could add value and earn wages right from the first task.

Micro-work is then parcelled out to small, independent pockets of workers through the Internet, making their location largely irrelevant. Samasource provides the knowhow that allows local entrepreneurs to set up tiny Internet access centres, using cheap equipment, small satellite receivers and solar panels where there is no power grid.

The idea of Samasource had taken root years ago, when Janah, just fresh out of high school, travelled to Ghana, where she taught English to blind children in a small village. "These children blew me away," recalls Janah. "They listened to the BBC World Service, stayed after class to discuss their favourite books, and they were hungry for opportunities."

However, in Ghana there were few to be had. And when Janah returned to the US, she received dozens of letters from the children, asking for money, books or even a Nintendo game boy. "I was shocked. These were the same students with talent and ambition whom I had met a few months ago. What I realised was that they saw a greater opportunity in asking help from me than earning their own money. Well-meaning outsiders have created a culture of handouts," says Janah.

Back in the US, Janah decided to study economic development and enrolled herself in an undergraduate course at Harvard, working three jobs to make ends meet. She kept travelling to Senegal, Rwanda, applying for every grant she could. After a stint at Katzenbach Partners, a management consulting firm in New York, and the World Bank's Development Research Group, Janah founded Samasource in San Francisco in 2008.

While Janah works fervently to create livelihoods in poor areas across the world, she does not want Samasource to be perceived as a non-government organisation. "Companies don't work with us for charity, but because we are cost competitive and do quality work," she insists.

break-page-break
Credibility, she is working hard to build. Being a woman doesn't make the job easier, especially when it comes to raising funds. But soon enough, investors will chase the person who they think will make money, regardless of whether they wear a skirt or not.


Sumaya Kazi founder, Sumazi
Another ambitious woman betting on the social media is Sumaya Kazi, a 28-year-old originally from Bangladesh, who a few months ago started Sumazi, a LinkedIn-like multi-platform mobile and Web service that is making waves on the cyberspace. It all began with a small online magazine that she started for fun while working at Sun Microsystems to reconnect with the South Asian community in the US and vent out some of her own frustration.

"In my community, the stereotype is that to be successful, you have to be a doctor, a lawyer or an engineer. It's the holy trinity of success," explains Kazi, sitting in a small cosy coffee shop in San Francisco's trendy Noe Valley.

That is where she works most of the time and from where she actually launched her new website. "My parents tried to push that on me too. They wanted me to be a doctor, and did not know what PR (public relations) was or what I was getting myself into," she says.

Instead of complaining, Kazi decided to do something about it: with a few friends she started an online magazine — the DesiConnect — posting every week two interviews of young entrepreneurs from the South Asian diaspora, who broke traditional stereotypes of success. "Within two weeks, our publication became viral," recalls Kazi.

Soon, people from other communities started writing to her, too. DesiConnect became CultureConnect. It featured entrepreneurs from West Asia, Latin America and Africa. In 2006, Kazi was recognised by Businessweek magazine as one of America's best young entrepreneurs.

Her first reaction was sheer panic. "I thought I was going to lose my job," recalls Kazi. No one at Sun then knew about her extra-curricular activities. But instead, Sun's marketing head sent out an email to all employees congratulating Kazi on her success. After that award, she started getting calls from advertisers and she sensed a bigger opportunity there. After four and a half years at Sun, she left the company.

In December 2009, she went back to her hometown, Feni in south Bangladesh, to think things over. "I had the scariest conversation with my parents. I knew that my mother would definitely not approve of it," she says.
However, her father was supportive. "Jump in the fire, but try your best not to get burnt," he told Kazi. "Do not worry about your mother, I will take care of her."

Kazi returned to the US all fired up. "I was trying to think big, global. How could I create more connections between people?" asks Kazi. That is how the idea for Sumazi was born.

"Existing websites such as LinkedIn or Facebook are all about reinforcing existing relationships, but not creating new ones," she explains. According to Kazi, 98 per cent of the data collected on Facebook has not been used smartly. She started building technology that identifies people in extended networks, using 50 to 70 variables such as religion, ethnicity or professional skills.

"We built an intelligent recommendation engine using matching algorithms, leveraging data from multiple networks, introducing people who should know each other. It is a different type of networking," explains Kazi.

A few months later, Kazi wanted to test her idea. So she applied to the startup competition, TechCrunch Disrupt Battlefield. "Our product was not really ready yet, but I just wanted to validate my idea."

Kazi's project was among the 25 that were selected for the second round from the 1,200 applications received. "I really didn't expect it," says Kazi. "And I was not ready to launch, but that was one of the rules of the competition. We had to launch before the final."

For three weeks, she worked day and night to develop an iPhone application and Web service. They launched in October 2010 and their hard work paid off. Sumazi won the award for "Start-up Most Likely to Change the World", instituted by Omidyar Network, a philanthropic investment firm that was established by eBay founder Pierre Omidyar.

Although the "real" launch will be this April, Kazi is already working with private companies such as Red Bull — it is actually using Sumazi that she connected with the company's marketing head through a 17-year-old high school kid in New York. She has been contacted by a local political party, the Democratic National Committee, who wants to connect with minority women under 35 in the Bay area. A few weeks ago, she was in Chandigarh, where she set up a development team to help run the website.

Kazi is still funding the company with her savings and has just started raising capital. "I am competing with the big boys now. And there is definitely intimidation there.

Being the only woman, especially in my space, it feels a little daunting, but also really exciting," she says. Kazi has already received commitments from seven investors, including Christina Brodbeck, a Silicon Valley angel investor and the co-founder of popular video-sharing website YouTube.

There is still a lot of work ahead, says Kazi. But she hopes to be able to raise $1 million this year to keep things going. And Kazi is gaining recognition in the industry, and at home.

A few weeks ago, TechCrunch TV interviewed Kazi. When her mother watched the video online, she told her daughter excitedly: "My God, now I finally understand what you are doing!"