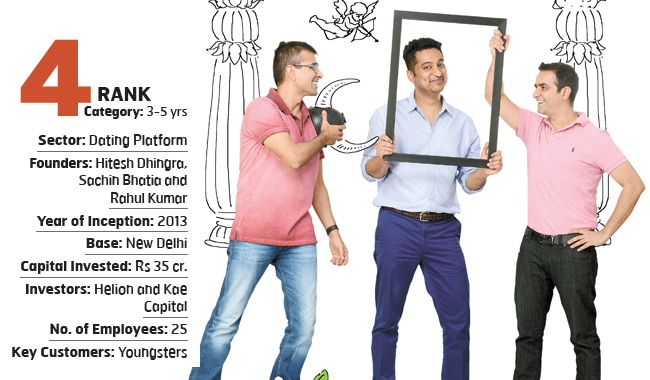 10 June, 2015
Print this article Font size -16+
Two-thirds of Indians are less than 35 years of age. No prizes for guessing that a big chunk of this number is single and is ready to meet people.

In fact, you have at least 80 million youngsters, of both sexes, in urban centres, wanting to meet each other over a cup of coffee or a movie or a game of tennis.

The Internet has been a go-to place for many a youngster as it allows them to connect online first and then meet in the physical world. But world over, this system raises security concerns about the kind of people one could run into in the real world. This is where TrulyMadly, a curated dating platform, found a great business opportunity. It helps in making connections based on shared interests as well as it verifies the parties against their Facebook profiles. A user has to provide their passport details or other government certified identity cards for verification. This way the dating company can also access the person’s legal history.

When Hitesh Dhingra, Sachin Bhatia and Rahul Kumar started this business a year ago they realised that they have to strike a chord with women if this venture was to become a success. “Research says that most women were not happy to be on dating sites because of lack of security layers and feared that they might just end up meeting a criminal or a stalker,” says Bhatia, co-founder of TrulyMadly.
So the first thing that the TrulyMadly app and website does is check the Facebook profile of a person; its automated engine removes anyone who has false information or images. “It is important to verify before we allow people to use the app because some of the married men try to come in as singles,” says Bhatia. Only after the first level of background check — through a user’s social media profile — is completed satisfactorily, a person is allowed to log on to the app. Once the user logs in,  he/ she is allowed to access the first ten profile views for free. And it is only when two people like each other’s profiles, TrulyMadly allows them to chat with each other. At the third level, once both are comfortable meeting each other after chatting on the messenger, their phone numbers are made visible with their consent.

The company has 500,000 users  registered on its platform, and a fresh infusion of venture capital money of Rs 35 crore, from Helion Ventures and Kae Capital, will allow it to build the technology needed to make it a better and more popular product among youngsters. Earlier it had raised $100,000 from MakeMyTrip founders Deep Kalra and Rajesh Magow. It had also raised money from Manish Vij, the founder of Tyroo. “The company offers a secure way of connecting people and it is a great platform for youth to meet people. The data collected by this platform will create a very valuable business,” says Ritesh Banglani, partner at Helion Ventures. Their business model is very unique. Currently, users pay for the profiles they want to view. TrulyMadly is also creating a strong content play. Here, key courtship greetings and phrases can be monetised: it is called a “freemium” model where you get a few items for free and you can buy the rest based on your needs. There are also opportunities for games and quizzes to be monetised.

The First Courtship
In 2010, Bhatia exited MakeMyTrip after spending a decade there as one of its founders. He decided to take a break and angel invest in a few startups. Meanwhile Kumar, who had worked with Bhatia in MakeMyTrip, was working at a hospitality services firm as a technology expert. In 2012, the two of them ran into Dhingara, who had just sold his startup LetsBuy to e-commerce giant Flipkart. Over several meetings, they decided they had to focus on a social platform for the youth that would allow them to express themselves without the fear of social barriers attached to dating in India. After conducting primary research and building the technology, they set the ball rolling in March 2014. “We ran a pictorial campaign that went viral in Delhi,” says Bhatia. The campaign titled #breakingsocialbarriers created a buzz in Delhi and then went national. “These clever photographs showcased that one could cut across all barriers,” says Bhatia.

BW|Businessworld spoke with a few users of the app. “It was just curiosity that drew me to register on the site. But I never expected it would change my life because I met a wonderful person,” says Manjula, a banker from Bangalore. It seems everyone was downloading the app out of curiosity, but then they ended up using it because of the guaranteed safety.

Tinder and OKcupid are the closest competition to TrulyMadly. But these are not curated and it is optional to register as a premium customer. Also, they are making no attempts to protect women from potential dangers.

Recently, Tinder sold 10 per cent of its stake to InterActive Corp at $500 million. This sale made the dating industry a darling of valuations.  No doubt the same is going to be the case in India. But surely with an Indian touch, quite truly and very madly.