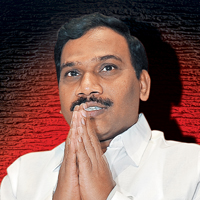 08 November, 2014
Print this article Font size -16+
It's 10.30 pm on 14 November. 2A Motilal Nehru Marg, the official residence of the minister of communications and information technology A. Raja in central Delhi, is enveloped in silence. Raja has just returned after being forced to resign as opposition stalled Parliament and the Congress party mounted pressure. Senior party leaders from DMK (Dravida Munnetra Kazhagam), the party Raja represents in the government, are in attendance. As is Raja's predecessor and party chief M. Karunanidhi's estranged nephew, Dayanidhi Maran, who joins in the confabulations. The party needs their collective intellect to strategise for the next morning, which is expected to be explosive. The Supreme Court (SC) is hearing two cases (one filed by an NGO, Centre for Public Interest Litigation, and the other by Janata Party leader Subramanian Swamy), both levelling charges of corruption against Raja in the allocation of 2G spectrum. Also, the Comptroller and Auditor General of India's (CAG) report on the "Issue of licences and allocation of 2G spectrum by the DoT and the ministry of communications and information technology" is to be tabled in Parliament.

The next morning, as soon as the CAG report is tabled in Parliament holding Raja and his ministry responsible for a "presumptive loss", depriving the nation revenues of between Rs 57,666 crore and Rs 1.76 lakh crore, there is panic in the Raja household. DMK Rajya Sabha MP and Karunanidhi's daughter Kanimozhi rushes in on the apprehension that the Central Bureau of Investigation might raid the house. Within minutes, the house turns into a beehive of activity as shredders are made to destroy sheaves of documents. The raid, it turns out, was a false alarm and Raja's staff say shredding papers was a routine exercise.

The Fallen Hero
By 3 pm, Raja is on a flight to Chennai where he gets a martyr's welcome as DMK tries to portray him as a Dalit hero who has been wronged. But the damage to the government has already been done. Following the CAG report, the Supreme Court embarrasses the government further by asking it to explain why the Prime Minister (PM) did not take action against Raja for 16 months (the Supreme Court has sought an explanation from the PM by way of an affidavit). With neither the opposition nor the SC relenting, the Raja episode remains fluid as dynamics change on an hourly basis.

A day later, PM Manmohan Singh went on the defensive at the 150th anniversary celebration of the CAG. He  said: "…there is a very thin line between… a bonafide genuine error and a deliberate mistake", hinting that the government may defend Raja's action. He added, "…it falls upon this institution to sift the wheat from the chaff, to distinguish between wrong-doing and genuine errors, to appreciate the context and circumstances of decision making". It will be a while before it can be judged whether Raja did what he did deliberately. Or, was it "bonafide genuine" mistake as the PM has suggested.

Big Mistake, Big Numbers
At Rs 1,76,645 crore, this seems like the mother of all ‘scams'. But examine the presumptive loss in detail, and you would realise that much of it comes from the notional amount of Rs 1,02,498 crore based on what the government may have garnered if all the 122 licences in 2008 were sold at the value of the 3G licences that fetched Rs 67,719 crore earlier this year. This assumption itself is debatable because in a market driven by demand and supply, such high prices would not hold if the supply (licences and spectrum) was going up.

The Cellular Operators Association of India (COAI) has justified Raja's decision. "Loss of revenues is completely notional," says a senior COAI official. But even though the amount may seem like an overstatement, it is hard to reject the view that the central exchequer has been denied an opportunity to earn substantially more than the Rs 12,386 crore the government earned from the licences given in 2008. Depending on the method of calculation, the "presumptive loss" could range to several times what was earned. And while the telecom ministry says it was working within the overall guideline to bring in more competition, the method adopted to herald competition may have twisted rules and regulations to suit the situation.

The CAG report has said that not only did Raja not implement the UAS (unified access service) policy approved by the council of ministers in 2003, he interpreted clauses to suit his requirement. The CAG report further notes that the Telecom Commission was not consulted before granting the 122 licences in 2008; the finance ministry's opinion to revise the pricing of the licences to current prices was overruled and the PM's advice to hold auctions ignored. Besides, the DoT, which reports to Raja, announced arbitrary cut-off dates; it issued licences to ineligible candidates; and it did not follow the first-come-first-served (FCFS) policy in allocating licences. The then Telecom Regulatory Authority of India (Trai) chairman Nirpendra Misra has submitted before the Parliamentary Committee on Information Techno- logy that the FCFS scheme was not implemented as a whole package as suggested by Trai. "It was taken to fit the decision by the ministry of communications," he says.

Among the 85 ineligible candidates, the CAG report has made a sharp comment on the licence given to Swan Telecom (since sold to Etisalat DB). It said Swan Telcom "was acting as a front company on behalf of RTL (Reliance Telecommunications owned by Anil Ambani's ADAG group) and their application was in effect against the intent and spirit of the UASL guidelines". An ADAG spokesperson replied in a statement: "Our group had no shareholding in Swan Telecom at the time of grant of licence to them or any time thereafter, and that issue is accordingly not relevant to our company."

The opposition's demand for Raja's head was grounded in the assumption that all this was done for financial gains to favour certain cellcos. On the contrary, Raja's empathisers suggest there was no scam. Instead, he is being victimised by the GSM lobby comprising the dominant GSM companies who tried their best to delay opening up the sector for more players. And that his shy, inarticulate personality has proved to be his nemesis.

But the fact remains that such widespread rule-twisting is not possible without the involvement of bureaucrats who would have eventually signed on the files for action. And any investigation would have to examine the decisions of Raja as well as the bureaucrats, who complied with all manner of rule-bending. For instance, former telecom secretary D.S. Mathur is on record that he did not sign the issue of letter of intent to the companies that were given 2G licenses on FCFS basis in 2007. However, docum- ents examined by BW suggest that he did sign the letter and was fully aware of the way the minister wanted to issue 2G spectrum licences.

The Post-Mortem
The question is: what could be the implications of the CAG and SC observations? As the last resort, the government can cancel the 122 licences issued by Raja. This would affect companies such as Uninor, Swan Telecom (now called Etisalat DB), Shipping Stop Dot Com (now Loop Telecom), Datacom (now Videocon Telecom) and S Tel. However, the government, which is largely defending the actions, is unlikely to cancel licences on its own unless the impropriety is proven in a court of law. That itself may take several years, in fact. Besides, the government will have to consider the wider implication of such a move involving 10,000 employees and over 17 million subscribers, who may double by the time such a decision is made.

Raja's decisions would now be examined in detail by the Public Accounts Committee (PAC) headed by Murli Manohar Joshi of the Bharatiya Janata Party (BJP). The BJP-led opposition has refused to allow any business to be transacted in Parliament over the past few days demanding a joint parliamentary committee (JPC) to look into the 2G scam. The government has not acceded to the demand yet.

DMK insiders say the government has made some concessions to the party for Raja's head. First, under Sibal the government will be working with the DoT in preparing a defence against the charges levelled by the CAG and the Supreme Court. Second, the UPA will not allow a JPC as demanded by the opposition led by the BJP. In return, the DMK will not seek a replacement for Raja at the Centre for at least a year.

Future Tense
The real impact of Raja's ouster, however, will be on all the decisions that have been stalled by lobbying or for want of consensus. Two days after Raja fell, the Trai in its 35-page letter to DoT fired the first salvo on 18 November by suggesting cancellation of 69 licences (comprising 20 circles of Loop Telecom, 15 circles of Etisalat DB and 11 circles of Sistema-Shyam, 10 of Videocon, Uninor in eight circles and Aircel in five circles) for their failure to comply with rollout commitments. DoT would need sound reasons to go soft on this recommendation. Besides, the Raja episode is likely to break the resistance piled on by the GSM lobby to indefinitely delay mobile number portability.

But the biggest impact is expected on two explosive decisions the government may be forced to take soon. First, it needs to decide what the 10 cellcos holding spectrum more than the 6.2 MHz that the original licence had committed need to pay. The Trai has suggested that cellcos must pay for additional spectrum at the rate at which 3G spectrum has been auctioned (curiously, it is holding back this recommendation to the telecom ministry). With Raja's removal, pressure will now mount on the ministry, now  led by Sibal, to take a decision and avoid any further loss of revenue to the government.

But such a decision would have its repercussions. For instance, the GSM  lobby — the biggest beneficiary of the largesse of the telecom ministry — so far has very successfully spread the view that charging fee for additional spectrum would land the government in court. "Let the criteria of presumptive assumption be applied for excess spectrum and we will challenge it in court," says a senior executive of a leading telco that is a beneficiary of additional spectrum beyond the mandated 6.2 MHz. It remains to be seen how the government would salvage its reputation.

The second decision is even more contentious since it relates to renewal/rebidding of all the cellular licences issued in India since 1995. The government needed to put in place the policy because the first of those 15-20 year licences expires in 2014, and the remaining by 2021.  So far, neither Raja's ministry nor the Trai had shown an inclination to move forward with the policy. The first white paper on the subject is currently in the works at Trai. However, given the stakes, the lobbying is getting vigorous. The decision between opening every licence for re-bidding by any player and continuing with the current licencees is a matter involving billions of rupees. Industry watchers expect honest decisions in public interest. After all, rebidding is sure to get better returns to the government as against allowing existing licencees to continue without competing for a fresh valuation.

Hopefully, the government would be mindful that all these decisions would go through public scrutiny and debate, and it would be hard to get away by taking a stance that a rogue minister spoiled the show. After all, there may not be another Raja to sacrifice the next time round.