The Show Just Got Bigger 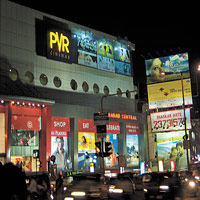 08 November, 2014
Print this article Font size -16+
The cinema exhibition business has seen another major consolidation with the PVR Group taking over the screens and assets of Cinemax India. In a deal that has been in the air for a while, PVR subsidiary Cine Hospitality acquired a controlling 69 per cent stake in the Kanakia-owned Cinemax for Rs 395 crore. With PVR’s 213 screens and Cinemax’s 138, the consolidated group has now overtaken Inox (256 screens) to become the largest multiplex operator in India. However, in size Reliance Mediaworks is ahead with 550 screens, 50 per cent of which are in Malaysia and New Jersey, US.
Cinemax’s  Kanakia Group, which had scaled up its screens sharply in recent years as part of its mall expansion, found it increasingly difficult to raise funds with more cinema properties than they could service. An exit from the multiplex business was the logical way out. “This is not their core competence. The Kanakias concentrated on increasing their properties rather than consolidating what they had,” said Smita Jha, leader (entertainment and media practice) at PricewaterhouseCoopers. Cinemax promoter Rasesh Kanakia agreed, saying, “The deal will enable us to ensure greater focus on our real estate and hospitality businesses.”
Participating in the deal with PVR are the Renuka Ramnath-promoted Multiples Private Equity (bringing in Rs 153 crore) and existing PVR shareholder L Capital (Rs 82 crore), with the Bijlis (PVR promoters) putting Rs 25 crore. After the issue of preferential shares, and after the takeover, both Multiples and L Capital will own 15.8 per cent each in Cine Hospitality, while the PVR promoters will own 32 per cent.
The acquisition gives Cinemax a valuation of Rs 565 crore. Many analysts see it as a very expensive deal. However, that is the price the Bijlis of the PVR Group are ready to pay for leadership position. “We have taken some huge losses in movie production and have opted out of that to focus on exhibition and distribution. We have added 45 screens this year. We don’t see any slowdown in expansion of our exhibition business,” PVR promoter Sanjeev Bijli said just before the Cinemax deal was struck.
The PVR-Cinemax deal also shows how difficult the multiplex business is. After a big jump-start a decade ago and after the subsidies in entertainment tax have faded, the multiplex industry is struggling today. Cinemax’s exit is not the first and neither will it be the last. In fact, it is the third big consolidation the industry in just over a decade. It began in July 2005 with the Reliance-Anil Dhirubhai Ambani Group buying a controlling stake in Adlabs for Rs 350 crore.
The second big consolidation was the acquisition of Fame Cinemas in December 2010 by Inox, helping it become No. 2 after Reliance Mediaworks with its tally of 204, ahead of PVR’s then 134 screens. Expensive tickets have kept the occupancy in multiplexes at a low of 25-30 per cent.

Simultaneously, the high cost of renewal and maintenance, has seen the small operator sell-out leaving fewer, larger players to fight for the turf. There is opportunity in store for the big players, though.
The Indian market, with just 12,000 screens, has among the lowest screens-to-population ratio.

And with better content in the pipeline, the crowds seem to be coming back to the box office.