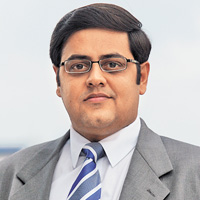 08 November, 2014
Print this article Font size -16+
It has been around for years, but most oil firms ignored it. Record high crude oil and gas prices in 2008 increased the thrust on unconventional sources of hydrocarbons. Shale gas, produced from unconventional gas reservoirs, started attracting interest of global oil and gas companies as economics and productivity of shale gas improved and prospects in traditional oil and gas-rich geographies declined. Increased interest in India in shale gas has followed the recent transactions by Reliance Industries (RIL) in the US and by Bharat Petro Resources (a fully owned subsidy of BPCL) in Australia.

Shale gas is similar to conventional natural gas. Both are primarily methane with similar heat content. The difference lies in the nature of the reservoir and extraction mechanism. Traditionally, oil and gas have been produced from conventional reservoirs, which have hydrocarbons stored in structural or stratigraphic traps and a sealing cap rock that allows gas to flow freely.

Shale gas production started in the US in 1989. It was then the niche of the small players. In the early 2000s, shale gas started becoming more viable with advances in horizontal drilling and hydraulic fracturing. This greatly improved the performance of shale gas wells and lowered finding and development (F&D) and production costs. With a workable cost structure now in place, potentially long-term gas supplies have been made available to the North American region — which has put pressure on LNG imports and gas prices.

As per estimates, North America  is expected to have over 200 tcm (trillion cubic metre) of shale gas in place. Shale gas now accounts for 20 per cent of US gas production. It has increased five-fold from 57 mmscmd (million metric standard cubic metre per day) in 2004 to over 310 mmscmd in 2010. The largest shale gas players in the US are Chesapeake, XTO Energy (acquired by ExxonMobil in December 2009), Southwestern Energy, Petrohawk and Devon Energy.

China, Canada, Poland and Germany have also witnessed the commencement of shale gas exploration programmes where global oil & gas majors have taken up significant positions. Australia, which pioneered the development of unconventional gas sources, is now witnessing interest in shale gas plays in the Cooper basin and the Gippsland basin.

Typically, a good shale play is characterised by favourable geology and low cost accessible drilling and fracturing services. The major shale gas plays in the US now have a breakeven price of $5/mmbtu (metric million British thermal unit), after including a return of 10 per cent on invested capital,  compared to an earlier high of $8-10/ mmbtu. This could fall further with advances in technology. This high cost of production and economic threshold necessitates proximity to pipeline infrastructure and consuming markets for shale gas projects to be viable. Large distances will result in high pipeline charges.

India embarked on the shale gas pursuit with ONGC's pilot study in the Damodar basin this year. Cambay shales and Assam Arakan basin geology have long been identified as potential areas for shale gas exploration.

While access to technology is the driver, other important factors that Indian shale gas developers are seeking to manage is environmental sustainability of such developments. Shale gas development involves the use of hydraulic fracturing that poses a risk of groundwater contamination while the associated drilling of a large number of horizontal wells raises issues related to noise, dust, lighting and construction traffic particularly close to the habitat. In addition, a comprehensive policy framework regime that provides clarity regarding acreage licensing, taxes, royalties and gas pricing mechanism will also help the cause. Exploration of shale plays in India is expected to shape the E&P (exploration and production) landscape in the country.