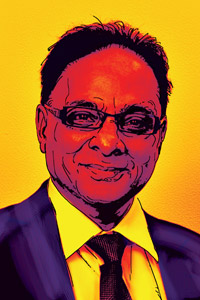 31 March, 2015
Print this article Font size -16+
Anil Ambani-owned Reliance Communications (RCom) completed the biggest-ever non-banking qualified institutional placement (QIP) deal in the country last year. That such a deal happened in the telecom sector is interesting because almost all telecom operators are bogged down by rising debt thanks to high capital expenditure and huge investments in acquiring spectrum. The combined debt of telecom operators is estimated to be in the region of Rs 2,75,000 crore.

That does not take the sheen off RCom that managed to raise Rs 4,810 crore through the QIP deal last year. The company netted an additional Rs 1,300 crore through a preferential issue of warrants to promoters. The company’s total equity proceeds (from QIP and preferential issue) would be about Rs 6,108 crore. Following the deal, the promoter shareholding has fallen to 59.7 per cent from 67 per cent earlier. The biggest QIP ever in India was done by State Bank of India, which raised Rs 8,030 crore.

About 84 per cent of the RCom QIP was picked up by sovereign funds and pension funds from the US and Europe. The deal was wrapped up by JP Morgan and CITIC Securities.

Despite the infusion of funds, the company’s net debt to EBITDA (earnings before interest, taxation, debt and amortisation) ratio still stands at a shade under 5 per cent.

RCom is looking to pare that to below 2 per cent, which is what other operators are currently at.

Despite the infusion of funds into RCom, there are still many issues. While the company managed to raise funds, it is a not-too-happy story for the investors that participated in the QIP deal. That’s because there has not been much of a change in the company’s operational performance.

While revenues were largely flat, the EBITDA during the first three quarters of the current fiscal is 5.8 per cent lower than in FY 2014. That’s not something good for investors who came in expecting things to change with the pumping in of funds.

While RCom has seen a fall in EBITDA earnings and profits, that’s not the case with the large operators who have seen profits rise over the last few quarters. The current spectrum auctions are also quite critical for RCom, since it needs to acquire spectrum in the eastern circles. But one thing is certain. This deal has brought RCom back into contention at a time when it was getting pushed into oblivion. It remains to be seen whether this could well prove to be the catalyst it needed to up the ante.