The Rediscovery Of India 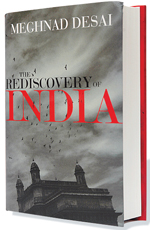 In a valedictory address at Oxford University in 1980, Hugh Trevor-Roper, one of the 20th century’s most eminent historians, said: “Historians of every generation, I believe, unless they are pure antiquarians, see history against the background — the controlling background — of current events. They call upon it to explain the problems of their own time, to give to those problems a philosophical context, a continuum in which they may be reduced to proportion and, perhaps, made intelligible.” And that, it seems, is exactly what Lord Meghnad Desai has done in The Rediscovery Of India.

Our idea of India — not necessarily one that is supported by history — goes back several millennia, to the land of the epics, the Ramayana and the Mahabharata and the philosophy outlined in the Upanishads, the Puranas and the Vedas. As Indians, we have also long been obsessed with the idea of regaining our rightful place in the world, so much so that it has been infused into the ideology of virtually every political party in our sprawling democracy; never mind our linguistic and cultural differences.
Desai says as much, pointing out that while there is much poetry in that idea, there is little contemporary historical account from those times. There has been, however, lots of interpretation, and none better known than Jawaharlal Nehru’s The Discovery Of India.
For Desai, the history of India as a nation state begins in 1960. The rest of the past is prologue. The book is posited against the current upswing in India’s reputation and fortunes after having reversed decades of indifferent economic performance into becoming one of the fastest-growing economies in the world, particularly when highlighted against the financial crisis the world has been going through for the past 21 months.
India’s diversity — once the bane of our destiny — is now to be celebrated. No longer will western academics talk about the imminent break up of a geographically accidental country, but marvel at our unity and cohesion, despite all the things that seemingly separate us.
Against this backdrop, Desai undertakes to rediscover India and its place in the world, and how it got here in the 60 years it has been a republic. He injects a solid dose of realism into what might become runaway jingoism.
So don’t be surprised that the book raises a few hackles when it reinterprets much of what has been hitherto accepted as historical fact. For instance, while acknowledging Nehru’s enormous contributions to bring about a functioning democratic polity, Desai questions his idea of wanting to create a secular India in a nation of so much diversity.
Desai also brings to the forefront the economic ideas of Nehru’s successor, Lal Bahadur Shastri, who, Desai believes, could have changed India’s economic development trajectory if he had lived longer. With painstaking research and in great detail, the author puts the spotlight on a man whose significant contributions to economic policy have been all but ignored.
Desai is not a professional historian; he is   better known as an economist. He has spent most of his life outside the country of his birth. But that is hardly a disadvantage. He has used his access to the records of the British Parliament to set many of his conclusions in the appropriate context. One might say that new   information from these records provides novel perspectives on past events. He uses an economist’s tool    to raise provocative questions: the counterfactual box. There are several dispersed through the book, from what the shape of India could have been in 1750 to what could have happened had the Emergency not been declared in 1975, or whether India could have become independent in 1922 instead of 1947.
Counterfactual theory has often been used to ask questions that began with “what if..?”. Many disciplines use it. Policy analysts use to examine possible outcomes from policy actions, and legal theorists use it to examine scenarios. Others use it to measure changes over time. Desai uses it to highlight the importance of crucial aspects and events in determining whether what happened was the best outcome under the circumstances. Counterfactual reasoning is seen necessary for learning from history. The idea, as philosopher George Santayana said, is to avoid repeating it.
Lord Meghnad Desai
Santayana also said that history is always written wrong, and so always needs to be rewritten. “What is interesting is brought forward as if it had been central and efficacious in the march of events, and harmonies are turned into causes. Kings and generals are endowed with motives appropriate to what the historian values in their actions; plans are imputed to them prophetic of their actual achievements, while the thoughts that really preoccupied them remain buried in absolute oblivion.” Desai’s book does a good job of unearthing some of them.
Author Details:
Meghnad Desai received his BA and MA degrees from the University of Bombay. He holds a PhD in economics from the University of Pennsylvania, and has taught the subject from 1965 to 2003 at the London School of Economics. He has authored over 20 books including Marx’s Revenge: Resurgence of Capitalism and the Death of Statist Socialism; Nehru’s Hero: Dilip Kumar in the Life of India and Development and Nationhood.
(This story was published in Businessworld Issue Dated 08-02-2010)
Tags assigned to this article:
srikanth srinivas magazine politics book review penguin history religion meghnad desai allen lane the rediscovery of india vedas