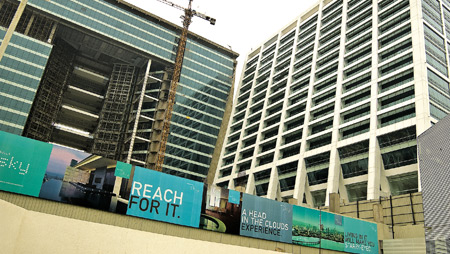 08 November, 2014
Print this article Font size -16+
It was March 2005. The National Textile Corporation's first mill auction for Jupiter Mills in Mumbai was being watched with considerable interest. None of the bids of the heavyweights such as DLF, Zee or Oberoi Developers were winners. On the evening after the bids opened, a relatively unknown Sameer Gehlaut called up a few business dailies announcing his firm, Indiabulls, had bagged the 11-acre Jupiter Mills for Rs 276 crore. It was a bombshell for builders and market pundits who had forecast a price of about Rs 120 crore.

Three months later, Indiabulls pulled it off again. It bagged Elphinstone Mills, near Jupiter in Mumbai's mill district of Parel, with an offer double that of the second-highest bidder at Rs 442 crore. Elphinstone Mills was just 7.76-acre; so against Jupiter's 11 acres, Indiabulls had doubled the price of mill land in just three months.

Ever since Indiabulls has been raging. Securities and broking, financial services, real estate, retail and now power, it has been a long, fast journey for the three young Indiabulls promoters — Gehlaut, Rajiv Rattan and Saurabh Mittal. Today, Gehlaut and Mittal are 35 and Rajiv Rattan is 37, and the group claims a net worth of about $3 billion. Not surprisingly, Indiabulls faces a plethora of questions on its seemingly endless source of funds; and for being helped along by the tweaking of government policy.

Real Estate Leap
It all began in a small office near Hauz Khas in Delhi in 2000. Gehlaut, just back from the US, acquired a small broking firm, Inorbit Securities, and dragged Mittal and Rattan — pals from his 1995 IIT days — to launch Indiabulls Securities and IB Financial Services. For the start-up, the trio got a leg up from steel tycoon L.N. Mittal who invested $1 million. Gehlaut has never been chary of admitting to Mittal's support. Today, the steel magnate has $500 million invested in the group. Of the three promoters, Gehlaut, the more aggressive, is the group chairman and holds 50 per cent of the promoter equity. Rattan and Saurabh Mittal, both vice-chairmen, share 50 per cent equally.

The young entrepreneurs haThings d a rough start though. Recalls Gagan Banga, CEO of IB Financial Services, who has been with the group since its start: "The markets tanked in 2000 thanks to Ketan Parekh. only stabilised when IB Financial Services went public in 2004 and raised Rs 52 crore." IB Financial Services in FY2005 did well with a net profit of Rs 24 crore on an income of just under Rs 53 crore, but the young bulls were looking for critical mass. That is when they thought of real estate.

In 2005, land prices were still affordable. And Gehlaut was ready for the gamble. Indiabulls sunk Rs 738 crore in two quick auctions to pick up 20 acres of NTC's mill property in the heart of downtown Mumbai. That's when the second faithful investor after Mittal came in. US hedge fund Farallon Capital partnered Indiabulls, picking up 60 per cent equity for $110 million (about Rs 510 crore) in two special purpose vehicles (SPVs). This was the first FDI in real estate. Farallon, the second largest hedge fund globally, has been around with Indiabulls ever since, investing in all new ventures.
Critics said the mill purchases were way too expensive and would kill the company. Today, Indiabulls Centre, a futuristic piece of design and engineering, has gone on-stream in what used to be Jupiter Mills. Frenetic construction is taking place in both the mill properties, while many similar projects are in financial disarray. Indiabulls Real Estate is now the fourth largest realty firm after DLF, Unitech and HDIL with a market capitalisation of around Rs 9,000 crore.

A Little Policy Nudge
But Indiabulls's growth has not been without its problems. The property price crash hit the company hard. At the peak of the boom in June 2008, Indiabulls's Centre on Jupiter Mills was signing lease deals at an astronomical Rs 300-350 a sq. ft per month. After the crash, most of these were cancelled; some were renegotiated at Rs 150-175 a sq. ft per month.

Again, Indiabulls was among the first Indian developers to list a business trust, the Indiabulls Property Investment Trust (IPIT), on the Singapore Stock Exchange, in June 2008. At the top of the property cycle, IPIT raised $260 million (about Rs 1,200 crore) from investors. Though Indiabulls Real Estate, which holds 45 per cent, managed to raise the money before the crash, investors lost heavily. The high returns promised to investors via lucrative lease rentals for the mill properties never materialised. Later, another Indiabulls arm, Dev Property Developers that was listed on London's AIM had to be de-listed after its share value declined to naught. This hurt investors more.

However, a few recent government policies seem to have helped Indiabulls along. Principal among them is the extension of the benefit of a higher floor price index (FSI) of 4.0 available to IT parks for financial services too. The FSI index is the ratio of built-up space in relation to the ground area. A higher FSI of, say, 2.0 means a builder can develop built-up area twice the size of the ground area. Indiabulls commercial complexes in Parel, Mumbai, have benefitted from this by availing of 4.0 FSI, against the stipulated 1.33 FSI available to mill properties. A senior official with a housing finance firm expressed surprise at the ease with which Indiabulls managed to have its Parel pavements cleared of shanty-dwellers when most of the island city continues to grapple with the problem.

But all this pales into insignificance in the face of the massive Rs 1,376-crore redevelopment project that Indiabulls bagged in August this year from the Maharashtra government. In exchange for developing the government properties, Indiabulls was to be compensated with an adjacent four-acre plot for commercial development. But soon after the project was awarded, competing developers alleged the terms of tender had been deliberately kept vague to favour Indianbulls. While normal FSI of 1.33 was offered, it was not clarified that the FSI for the commercial plot was 4.0. This kept the bids low, allowing Indiabulls to sail through, they alleged.

The controversy erupted just before the Maharashtra polls and  forced chief minister Ashok Chavan to cancel the award. Banga denies the charges of favouritism. "Our detractors have not understood the terms. An FSI of 1.33 is applicable to the whole project." Banga, however, was confident the project will ultimately come back to them. "It is a matter of time," he says.

Clever Financing
More than government policy benefits, however, it is clever and effective financial management that has powered the Indiabulls growth. The group has timed a series of stake sell-offs to ensure a steady flow of funds to accumulate assets and launch new verticals. When entering real estate in 2005, IB Financial Services brought in Farallon to capitalise IB Real Estate. Indiabulls Real Estate, in turn, raised $400 million via global depository receipt (GDR) in July 2007. Again, over the next two years, Indiabulls Real Estate raised Rs 910 crore through investment partnerships in nine realty SPVs. Further, the real estate arm raised Rs 988 crore for its new subsidiary, Indiabulls Power, from Farallon between October 2007 and July 2008, slicing an 18-per cent holding. Another Rs 593 crore was raised from L.N. Mittal's LNM Venture Fund for an 11 per cent stake. "We are following a strategy of one Indiabulls firm promoting another and then demerging," says Banga.
The group also seems to get its timing right. As the market showed signs of moving up after the long slowdown in May, Indiabulls was the first to do a rapid fire qualified institutional placement (QIP), when others were still in a slumber mode. Selling 9.6 per cent of the promoters' equity at Rs 185 a share, it raised Rs 2,700 crore for real estate. Two months later, Indiabulls Financial Services too entered the market with a QIP, and raised Rs 1,200 crore.

"We are a debt-free company, and want to remain that way. Debt makes us sell at the bottom of cycle," says Banga. In real estate, where builders frantically hit the QIP market to reduce their back-breaking debt, Indiabulls used QIP to fund growth. Says Ajay Parmar of Emkay Global: "What is striking is Indiabulls's ability to raise funds when they are available, and not when they are needed and expensive."

The aggressive equity sell-off has its risks though. The promoters' holding in IB Financial Services is down to 24 per cent, with Gehlaut holding 12 per cent and Saurabh Mittal and Rattan holding 6 per cent each. In IB Real Estate, their collective stake is down to 18 per cent, while in IB Securities it is 30 per cent. Banga is not worried: "It is not an issue since with Farallon and (L.N) Mittal, our collective holding is above 50 per cent."

Risky Diversification
But everything that Indiabulls and Gehlaut touch do not necessarily turn to gold. For instance, its diversification into retail has so far been a non-starter. The group bought a chain of stores from Pyramid Retail three years ago, but lack of domain knowledge has forced huge losses — Rs 120 crore in FY2008 and Rs 90 crore in FY2009. From the insignificant revenue numbers in the first half of the current year, it seems that Indiabulls is pulling out of retail. Banga denies retail is being shut but acknowledges having gone astray. "There are issues that were not apparent at the time of acquisition; and the market has turned out to be tougher than we had anticipated," he says.

The group's recent diversification into the power sector is also seen as risky. Indiabulls Power in August completed an IPO to raise around Rs 1,600 crore. The company has five thermal power projects under development with a total capacity of 6,615 MW.

On the upside, Indiabulls is targeting central India — Chhattisgarh and Maharashtra, the two most energy-deficient states — with a series of long-term power purchase agreements (PPAs). It has a respectable business plan. The land for the various power plants at Nashik and Amravati has been acquired through the government; coal supply agreements from captive mines have been secured; and PPAs for 2,300 MW of the power-to-be-generated has already been signed. But delivery is a long way off: these projects are likely to be commissioned only in 2011-13.

Most analysts also say Indiabulls has no experience in power and mining — two difficult sectors for India. Land acquisition by the government is no guarantee for success, as has been repeatedly proved. "Indiabulls Power is looking to sell 75 per cent of the power generated via long-term PPAs to state electricity boards. Poor health of these SEBs would impact financials and delay in payments or default would affect the company operations," warns Nishna Biyani, an analyst with Prabhudas Liladhar Securities.

Meanwhile, Indiabulls is still to acquire 700 acres of the required 1,400 acres for the Bhaiyathan Thermal Project in Chhattisgarh, says an HDFC Securities report. But Banga is not flustered. "We are used to long gestation cycles," he says. "In real estate too, projects do not complete quickly. In power, the cycle may be 25 years."

Risk or no risk, it is clear Indiabulls has decided to play for big stakes. The company is targeting power to be its flagship by 2013, overtaking real estate.

Indiabulls pulled it off in real estate as a late entrant. Perhaps, it is early to hazard a guess whether it can repeat it in power, but then the die has been cast. And the company has decided to have a go.