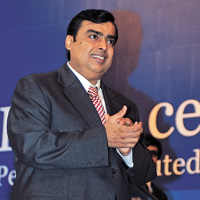 A 41.4 per cent growth driven by a merger with Reliance Petroleum and improved refining margins put it at the top. While IOC's income fell, it is still more than RIL's. But RIL's asset base is larger by 54 per cent. Also, RIL's debt-equity ratio has fallen to 0.49 from 0.7 thanks to a 15 per cent drop in borrowings. But it remains the biggest borrower in absolute terms in the list with total debt of over Rs 64,000 crore.

What gives RIL the confidence to expand is the 16 per cent jump in its net worth (about Rs 1,41,003 crore). RIL plans to double its enterprise value to $80 billion within the next decade. A Rs 42,000-crore expansion of the Jamnagar petrochemical and refinery complex by 2014 is also planned.

In April, RIL ventured into shale gas exploration — it bought 40 per cent stake in Atlas's Marcellus Shale acreage ($1.7 billion), 45 per cent in Pioneer Natural Resources' Eagle Ford asset in Texas ($1.3 billion) and 60 per cent in a venture with Houston-based Carrizo Oil & Gas ($392 million). Arvind Mahajan of KPMG says this will give RIL a leg-up in India when the country opens its shale gas assets next year.

But challenges remain. KG D6's gas output was expected to go up from 60 million standard cubic metres a day (mscmd) to 80 mscmd this year, adding $1.1 billion (Rs 5,100 crore) to revenue annually. But Goldman Sachs feels this will not happen for the next two quarters.

RIL will also need to fund its telecom re-entry through Infotel, which bagged broadband wireless spectrum in all 22 circles for Rs 12,872 crore. But as current rules prohibit voice services on BWA, rivals with 3G may have an upper hand.

On the power-generation front, RIL's plans have not been finalised, even though a foray was announced during its AGM. In addition, the
Rs 5,220-crore Reliance Retail is still bleeding. But then RIL has Rs 1,38,025 crore in reserves  and Rs 24,417 crore as profit.

Last year's numero uno, Indian Oil Corporation (IOC), has been pushed off the throne in the BW Real 500 list by Reliance Industries (RIL). IOC's income dropped from Rs 320,517 crore to Rs 286,456 crore this fiscal, owing to a drop in international crude prices. This, however, does not bother IOC chairman B.M. Bansal. "Sales volume has increased and the company is doing fine."

IOC, in fact, has its foot firmly on the gas pedal. It plans to enhance its refining and retail business as well as add 800 new petrol pumps. To strengthen its global presence and gain more experience in exploration, it has set aside $1 billion for foreign acquisitions, and claims to have already spoken to BP for asset acquisitions.

The company, which is already present in the entire value chain of the petroleum segment — exploration, refining, marketing, pipelines, petrochemicals and gas to global operations, may venture into shale gas. "Right now, nothing is on the table. But if we get a good option, we would surely opt for it," says Bansal.

In India, IOC is setting up a Rs 10,000-crore gasification and re-gasification plant in Tamil Nadu. In petrochemicals, the company's Panipat unit and Haldia Petrochemicals have raised their naphtha offtakes by 88.8 thousand metric tonnes (TMT) and 32.2 TMT, respectively. Also, work on the sulphur recovery unit of IOC's Haldia plant is expected to be commissioned soon, after which the company will operationalise its Rs 2,869-crore hydrocracker project.

Though IOC is not the market leader in petrochemicals, it has been making significant inroads into competitors' share. In fact, in the past four financial years, it has climbed to being next to only RIL. "RIL has a variety of products in the petrochem segment. At IOC, the situation may improve after the Panipat unit goes from 12 million metric tonnes per annum (MMTPA) to 15 MMTPA," says an analyst.

A major development likely to take place this year is that the government may offload another 10 per cent of its stake in IOC, provided IOC adds eight independent directors to its board.

But ONGC faces a lot of challenges. It has not been able to successfully convert its big exploration bids into production wells. The Comptroller and Auditor General's audit report 2010-11, which examined ONGC's performance during 2004-05 and 2007-08 in 37 shallow water blocks (21 nomination blocks and 16 New Exploration Licensing Policy blocks), says its exploratory efforts are slow. The report says there is a shortfall of 41 per cent as only 76 locations out of a planned 130 have been drilled.

R.S. Sharma, ONGC's chairman and managing director, says, "ONGC faced criticism, but we can show that all our overseas fields are making some gains and will soon show profits from these ventures." ONGC Videsh has 40 projects in 15 countries, of which nine are producing assets while the rest are at exploration stage.

Then there is the high attrition rate — 14-15 per cent last year. But ONGC has brought it down this year to the industry level of 4 per cent.
M. Rajendran


TATA Steel, India's fourth-largest company, may be emerging from the systemic shock of acquiring Corus. Losses in Q1 and Q2 of 2009-10 were followed by three quarters of profits. This month, it sewed up a debt refinancing package for a £3.67-billion (Rs 25,690-crore) loan it took to buy Corus. "Instead of repaying £750 million-1 billion per year over four years, they have reduced it to £200 million per annum," says Prasad Baji, senior vice-president at Edelweiss Securities.

"While topline of Europe declined (in early 2009-10) due to lower volumes and prices, measures to save on operating cost were undertaken," says H.M. Nerurkar, managing director of Tata Steel. Now, demand and steel prices in Europe have improved. In India, too, more demand from infrastructure and auto sectors saw the company's profitability rise, says Nerurkar.

The biggest concern is the delay in its greenfield plants in Orissa, Chhattisgarh and Jharkhand. But Nerurkar says, "In Jharkhand, the announcement of a proper R&R policy is awaited. Construction at our Orissa site may start soon." The proposed plants could catapult Tata Steel to No. 2 in the world. The question is: how quickly?
Alokesh Bhattacharyya

BPCL, which retains the No.5 slot in the BW Real 500 list, has a lot going for it. Its 6-million tonne per annum Bina refinery will start production in 2010 while the Mumbai and Kochi refineries will increase capacity. Subsidiary Bharat Petro Resources (BPRL) is foraying into shale gas exploration along with Norwest Energy of Australia. "This would give us an early-mover advantage when such shale gas acreages are opened up for bidding in India," says S. Radhakrishan, chairman of BPCL.

Further, to enhance its E&P experience as well as to improve margins, it needs to move on from just being a strategic partner to being an operator. Currently, it does not operate any of the 26 blocks that BPRL has acquired abroad (second only to ONGC). It also lags competitors in the lubricants and oil market in northern and central India.

At Tata Motors, the turnaround at Jaguar Land Rover (JLR) — which it bought from Ford, and which sceptics saw as a losing venture — proved to be the game changer. Thanks to improved sales and internal measures, Tata Motors' consolidated net loss of Rs 2,503 crore in FY09 changed into net profit of Rs 2,155 crore in FY10. "A major factor was the growth in China and improvement in the US," says Ravi Kant, vice-chairman of Tata Motors. "Also, JLR is a large exporter, and exchange rates were favourable." This, and a 27.4 per cent growth in the topline, helped Tata Motors rise two slots in the ranking to the sixth spot.

In India, sagging sales of Indica (down 15 per cent) have been made up by sedan Indigo, up 137 per cent. Now, with the Rs 12-15-lakh Aria, Tata Motors is trying to inch up the value chain. "They are trying to build a positive brand image in a higher-priced segment," says Vaishali Jajoo, senior research analyst (automobiles), Angel Broking, adding that Tata Motors is likely to use JLR's technical knowhow for existing products in India. Kant says collaboration between various arms is happening. Surely, the JLR buy will mean more than just a premium sheen.