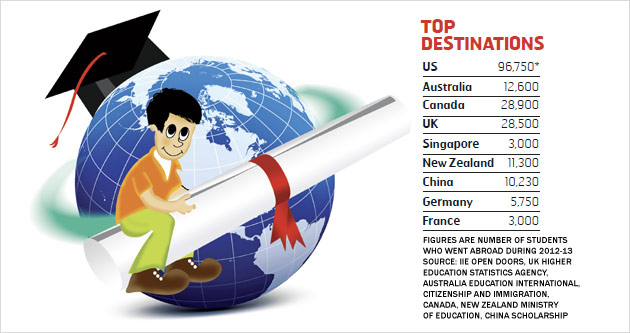 08 November, 2014
Print this article Font size -16+
About Rs 1.4 crore is what you will have to shell out for tuition and accommodation if your kid secures admission in an undergraduate programme at a top-notch college in the US or the UK. Add a few lakhs to the tab for miscellaneous expenses, and you would have done your best to provide world-class education to your ward.

Education is expensive, and if not planned properly, it can severely dent your savings. Planning is more critical when your children want to study  abroad.

“Almost 200 of our 250-odd applicants want to study abroad. The trend of going overseas to study has continued unabated over the past few years, despite the stupendous rise in the cost of overseas education in recent times,” says Farrokh M. Rustomji, CEO of the RD Sethna Scholarship Fund, which offers low-interest loan scholarships for higher studies.

A Matter Of Prestige
Overseas education has always been popular in India — right from the days of British Raj. It was prestigious — it is so even now — to study abroad. Scions of rich Indian families crossed the seas to get educated alongside the sahibs who ruled the lands.

According to consultants, over 2.40 lakh students travel out of the country every year to study. While the US is the clear favourite, the UK, Australia, Canada and New Zealand figure second, third and fourth in terms of choice.

“Indian students mostly go abroad for their master’s degree,” says Neeraj Saxena, CEO of Avanse Financial Services, which specialises in education loans. The reason why not many students go abroad for undergraduate studies is high cost of education. For a four-year undergraduate course, students have to pay anywhere between Rs 60 lakh and Rs 1.4 crore as tuition and hostel fees. Students can’t rely on scholarships as there aren’t many for undergraduate courses. Also, undergrads are not allowed to take up part-time jobs.

Rising Cost
The cost of overseas education, according to education consultants, has risen 20-30 per cent over the past five years. This does not take into account the weak rupee over the past two years.

“The year 2007 marked the beginning of the global financial crisis that led to reduced funding to state-owned institutions by a few states in the US — by around 10 per cent. This increased tuition fees by about 3-5 per cent annually. There was also a spike in living expenses due to higher rent. Collectively, this amounted to a 10 per cent rise in the cost of education,” says Ajay Bohora, CEO of Credila Financial Services.

A weak rupee took the overall cost further up. The local currency has depreciated over 57 per cent against the greenback since early 2008.  “The rupee has weakened against most currencies over the last four years, but the worst has been against pound sterling. This has made the UK an expensive place for education,” explains Bohora.
As per an Assocham study, the total cost of foreign education has increased by as much as Rs 4 lakh for a single academic session.

How To Cut Corners
One way to reduce cost is by opting for hostel accommodation. But not many universities have enough hostel space to accommodate all outstation students.

“Just about 30-35 per cent of students get hostel accommodation. Others have to rely on rented apartments, which can be very expensive. To save cost students rent out apartments in the suburbs,” says Vineet Gupta, managing director of Delhi-based education consultant Jamboree Education.

“American universities allow students to take up part-time jobs inside the campus. They are allowed to work up to 20 hours a week and are paid 7-8 dollars an hour. This is a good way to earn some pocket money,” says Gupta.

Education Loans
Most students rely on bank loans to fund their studies abroad. As per data from Reserve Bank of India, gross bank deployment in the education sector stands at Rs 1.17 lakh crore as of March 2014. The base assumption made by banks while disbursing education loans is that students will be able to land high-salaried jobs at the end of their professional training.

Prejudices Galore
Management and engineering students are among the most sought-after candidates for education loans. Medical students can also get loans, but the amount is decided on the basis of the profile of the medical college. So, if you enroll in a Russian or Ukranian medical school, you will be eligible for a smaller loan or higher interest rates, whichever suits the lender. Medical colleges in the UK are considered top-notch by most banks.

The same is the case for students pursuing courses in arts and humanities. Banks have an internal “mark down” for such courses. Students may also find it difficult to get a bank loan for studying non-traditional courses such as fashion designing, commercial pilot training, executive education programmes, hospitality and hotel management.

In the domestic circuit, students who manage to get into an IIT or an IIM can negotiate easy loan terms. Interest could be 150-300 basis points lower than normal education loans for them. Banks and specialised lenders charge anywhere between 10.25 per cent and 14 per cent interest on education loans.

“The idea of any lender is to give loans to the brightest students pursuing education in the best of colleges,” says Saxena of Avanse.

Rich Dad, Poor Dad
Education loans are also sanctioned on the basis of parents’ income. In fact, banks emphasise a lot on the co-borrower’s profile. Also, at the time of applying for visa, parents are required to show their assets (bank FDs, PF account or savings certificates, etc.).

In terms of ticket size, students can borrow up to Rs 4 lakh without providing any security or margin. A loan amount between Rs 4 lakh and Rs 7.5 lakh can be taken against a third-party guarantee. Anything above Rs 7.5 lakh is sanctioned against collateral (fixed deposits, savings certificates or property worth the loan amount). Banks keep a hair-cut margin while disbursing loans; they only pay up to 85 per cent of the net requirement. The remaining 15 per cent has to be mobilised by the student.

Repayment Schedule
The repayment period of education loans begins after 6-12 months of one finding a job. However, specialised loan providers like Avanse and Credila have flexible repayment schedules wherein parents of students can start paying EMIs immediately after the loan is disbursed. There is another option wherein one can choose to keep paying simple interest on the money borrowed, till the time the student is gainfully employed. This reduces the interest burden significantly at the time of actual repayment.

Banks and private lenders adopt a very cautious approach while sanctioning education loans as there has been an alarming rise in the number of defaults in this credit segment. According to banks, delinquency rate in education loans has been hovering at about 9 per cent —  much more than the average non-performing assets (NPA) rate of 4.3 per cent.

“Features such as early interest payment and one-year moratorium (after the course ends) help students  avoid restructuring or rescheduling their loans. The end-to-end tenure of our education loan can be as long as 12 years depending on the requirement of the student and parents and the loan amount,” adds Bohora of Credila.

While most lenders may not publicly agree, there have been instances where private banks and lenders have restructured or rescheduled loans to prevent outright defaults. Most of the time, the (loan) tenure is rescheduled, to give more time to students to find a job and start repaying the loan.

Scholarships
Apart from loans, students can also look for scholarships, which can take care of their expenses. There are several private trusts in India that offer scholarships and low-interest loans to meritorious students. (see Where To Tap Funds)
“Foreign universities also offer scholarship assistance to students with good academic profile. Sometimes, these scholarships cover almost 100 per cent of overall fees and living expenses,” says Gupta of Jamboree Education.

Some universities in the US also provide research grants to students pursuing technical courses. Research assistantship and teaching assistantship (assisting a researcher or a senior professor) also help students to recover 50-100 per cent of their fees and other expenses.

“Students may not get a scholarship at the time of joining a course. But a few months or a semester into the course, they manage to get good on-campus assignments,” adds Gupta.

Pick A Country
Education in countries like the UK, the US, Australia and Canada cost 2-3 times more than that in new and upcoming destinations. Besides, visa and work permit rules have become more stringent in these developed countries, thereby reducing one’s chance of finding a job.

“Countries like Hungary, Czech Republic and Poland are becoming popular among medical students. Earlier, medical students went to the UK for higher studies. But the higher cost there is prompting them to consider other options,” says Natasha Chopra, managing director of consulting firm The Chopras.

“Quality of the university is important; but more important is the skill-set that one can add to one’s profile studying in a university. All these upcoming destinations have universities that are comparable with institutions in the US or the UK,” says Chopra.

With so many options, students may find it extremely difficult to choose a country (or university) to pursue their higher education. The best way to do it is by understanding the core competence of each country.
While the US is good for all programmes, it is quite expensive. The UK is good for management, finance and medicine, while Germany is good for engineering, automobile designing, electronics and communication. Sweden has a few renowned universities for wireless communication technology. Some universities in the Netherlands and Singapore are famous for their engineering, finance and management faculties.

French universities are well-known for their aerospace engineering, management and fashion technology programmes, while Swiss and Thai institutes are known for their hospitality and hotel management faculties. Finland, Norway and Austria are good for technical education. Students, however, should be careful while enrolling in a Russian or Ukranian university as many are not recognised by employers outside these countries. They should also reconfirm the language of instruction when applying to universities in non-English speaking countries.

“Selecting a university is the most important step. This has to be done keeping your budget in mind,” says Victoria D’Sa, director, Global Education Consultancy Services. “Students may need at least a year to get ready for going abroad. They should have all the test scores in place — GRE for technical education, GMAT for management studies and TOEFL/IELTS for proficiency in English language. Money alone will not land you in a good university; you will have to work towards it,” says D’sa.

Likewise, management-degree holders from the UK and Australia — who pay approximately £18,000 or AUD 40,000 per annum — can land jobs that offer an average annual package of £20,500 or AUD 43,500, respectively.
“Everything boils down to the state of economy (of the country) at the time of students’ completion of studies,” says Chopra.

“Students get jobs in foreign countries only if there is shortage of skills. Currently, there is a huge demand for health workers, chemical engineers, solar energy experts and mining engineers; students who have majored in these courses will get placed easily. Others will have to try hard,” adds Chopra.

Acquiring knowledge and new experiences are two important pillars of overseas education. The third is a job contract with a decent pay package. Students should be able to foresee all the three pillars before the ship sails.