The Price Of Growth 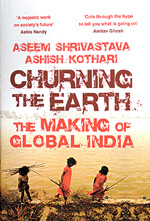 The elephant is slowly turning around. It is a fact that after suffering poverty and underdevelopment for millennia, India is regaining its lost glory. It was just a few centuries ago that India was among the most sought-after nations of the world, not only in terms of wealth but also intellect. Every ruler worth his salt wanted a piece of the country and every explorer wanted to discover it. But then we lost it all. What used to be advantages slowly turned into disadvantages — diversity became chaos and lack of systems, population expanded at an explosive rate, the Hindu rate of growth slowed to a crawl. But now we seem to be shrugging away the years of weakness and slowly getting back on track. India is getting into the thick of things anew. But at what cost? That is the question that Aseem Shrivastava, a teacher of economics and philosophy, and Ashish Kothari, a founder member of the environmental group Kalpavriksh, ask in their book, Churning The Earth, which holds a timely inquiry into India's much-touted growth story and the resulting damages to its social, economic and ecological fabric.

Rich with data and anecdotes, this interesting critique of India's development strategy argues for a radical ecological democracy based on the principles of environmental sustainability, social equity and livelihood security. Shrivastava and Kothari urge a fundamental shift towards such alternatives; something that is already emerging from a range of grassroots movements.

The book throws light on the fate of people and communities who are being left behind or being abandoned as India seeks to pursue prosperity through its chosen formula of globalised development. It also addresses those concerned about India's ecological fate, threatened as never before by the predatory impact of growth. The authors say that if we do not pay heed to the early warning signs that are all around us, the future of India as a society and civilisation will be under serious threat. Every citizen, however privileged he or she might be, will be affected.

The book makes for an interesting read, but I wonder how much of what it prescribes is practically possible. Or even how much of India's development is a result of a well laid out plan as the authors claim. Like the proverbial monkey who could type eternally to reproduce Shakespearean works, most of what we are witnessing in India seems serendipitous, rather than a part of a strategy. We are surrounded by examples of this every day. Politicians act on their whims and fancies; businessmen want to expand irrespective of the social consequences; social reformers, too, want their pound of flesh. It seems that in India everyone is on his or her own trip. Now this could actually turn out to be something good (I hope so), or something really bad, as the authors point out. But we do not have much choice other than just waiting and watching as a billion actors unfold the story on our stage.