The Power Of Shortage 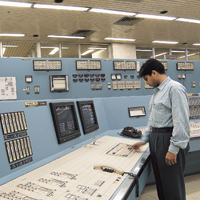 It might not be the panacea for all of India's power ills, but is surely a step in that direction. In 2006, the Union power ministry came out with the concept of merchant power plants (MPPs) with generation capacity of less than 1,000 megawatt (MW) each. These private power plants — which could be standalone plants or part of the capacity of regular power plants could be set aside for merchant power — would not be tied to any power distribution firm or electricity board through power purchase agreements (PPAs). Instead, they would supply power — to either power distributors or open access consumers — through an open grid. They are confident that there are consumers who are willing to pay in a shortage.

Given that those seeking power during massive cuts will be desperate, merchant power companies are likely to make a neat pile. The greater the demand, the higher the price of power. But the flip scenario also applies: if there is less demand, companies would be sitting on   huge investments that are giving no returns. The risks are enormous, but so is the opportunity, given the peak capacity shortage is currently at over 12 per cent of peak demand.

"We allowed merchant plants to come to make the most of the shortage situation," says Anil Razdan, former power secretary. The response has been phenomenal. Several private players have invested significant amounts in setting up MPPs. And banks have also been willing to live with the risks and finance their projects. The Chhattisgarh government, which is sitting on huge coal reserves, has entered into memoranda of understanding (MoUs) with companies for over 50 projects, each over 1,000-MW capacity. Of course, not all will finally take off as MPPs or even as conventional power projects with firm buyers. In all, an estimated 16 projects with a capacity of 14,000-15,000 MW of merchant power is now in the pipeline, say power ministry sources.

The Power Rush
Greenfield private power projects that were lying undeveloped for several years have been fired into action on the back of the merchant power promise. UK-based Hinduja Group's 1,000-MW project in Vizag, Andhra Pradesh, is one such. Stymied for 15 years due to disagreement with the state government and the Centre over a PPA, escrow agreements, project cost, etc., the project has been reborn as a MPP.

Ditto Videocon Power, which was to set up a 1,000-MW project in Tamil Nadu more than 10 years ago. The company has now revived plans to enter the power sector and intends to set up an MPP in Gujarat. Navin Jindal-led Jindal Power, a subsidiary of Jindal Steel & Power, has already set up a 1,000-MW coal-based MPP in Raigarh, Chhattisgarh. This project, too, had been languishing for over 12 years (see ‘The Suppliers').

There are relatively new entrants as well such as Hyderabad-based KSK Energy and Indo Ferro Alloys, which are also planning MPPs, says Satnam Singh, chairman and managing director of Power Finance Corporation (PFC), one of the largest lenders to power projects.

Apart from the potential profits that companies are eyeing, some other factors have also helped generate the push for MPPs.

The Enablers
To run a power plant, you need fuel, and coal dominates in India. Coal has been in short supply in recent times even for the existing power plants. So, to ensure merchant power projects do not come a cropper right at the outset, the power ministry has reserved coal for them.

Fifteen coal blocks with estimated reserves of about 3.6 billion tonnes have been identified for merchant and captive power plants. Of this, about 2.4 billion tonnes are expected to be reserved for MPPs. There are some who plan to import coal.

But what has really got the sector buzzing is the Rs 1.19 tariff that Reliance Power, the developer of the Sasan ultra mega power project (UMPPs, plants with capacity of 4,000 MW), has promised to charge. Normal prevailing tariffs in the country average Rs 2.63. Sasan's tariff has made merchant power developers believe that they, too, can peg their costs really low. A lip-smacking possibility, given that state governments in distress have been willing to pay more than Rs 10 per unit in recent times. That translates to amazingly high margins in the best case scenario. "If I get customers who are willing to pay tariffs of over Rs 5 per unit, then there is a ready market for my project," says Kuldeep Drabu, director of Videocon Industries.

According to ministry officials, Union Power Minister Sushil Kumar Shinde is planning to move a proposal to extend the tax sops — excise and customs duty waivers — given to UMPPs to MPPs. If implemented, these would help further bring down the cost of generating power and, consequently, the tariffs.

There are issues, however, that need to be addressed before merchant power can live up to its potential.

The Risks
"One of the important aspects that needs attention is ensuring states implement the provisions of open access," says Razdan. "This will allow a consumer to choose his source of supply." Developers agree. "State governments have to move fast and expedite clearances," says the developer of a MPP, who wished not to be identified. Some states are still not keen on allowing open access, but the Centre is pushing them to implement this facility.

Post-financial crisis, some banks have gone slow on funding MPPs, but the slowing down has been, well, slow. "It all depends on the lenders' comfort with the developer on the kind of payback assurance the developer undertakes," says Sushil Maroo, director of Jindal Steel & Power. To spread the risk, some promoters would like to apportion some capacity for merchant sale and tie up the balance with assured buyers through PPAs. The key for attracting debt financing for an MPP, according to Singh of PFC, is that the tariff should be around the national average of Rs 2.63 per unit.

The Central Electricity Regulatory Commission recently capped the price of merchant power at Rs 8 per unit, but only for the next 45 days of the festive season. Merchant power producers will hope that the cap will not be extended beyond that period. Nevertheless, the difference between Rs 8 per unit and Rs 3 per unit (average cost of producing power) gives a sizeable margin of Rs 5. Which is why none of this has put a dampener on the rush to build MPPs. Razdan reckons the huge interest will die down once supply catches up with demand. Perhaps, but isn't that what this is all about?