The Politics Of Funds Allocation 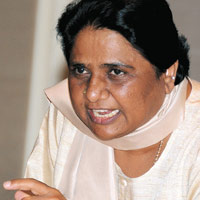 Two years after the centre rejected Uttar Pradesh (UP) Chief Minister Mayawati's demand for a special Rs 80,000-crore development package for the backward regions of the state, the Centre last week cleared a package of Rs 7,266 crore for the "integrated development of Bundelkhand region in the states of UP and Madhya Pradesh (UP)". Bundelkhand comprises seven districts of UP (Banda, Chitrakoot, Hamirpur, Jalaun, Jhansi, Lalipur and Mahoba) and six districts of MP (Chhatarpur, Damoh, Datia, Panna, Sagar and Tikamgarh).

While the new package flows from Congress general secretary Rahul Gandhi's demand for such a package, the fine print shows that the Centre is actually giving very little additional funds for UP; a major portion of the funds for this package would be raised from allocations already made to existing central schemes. In a smart political move, the Centre has taken credit for focusing on development of backward regions in UP, while taking away the limelight from the state's chief minister.

Bulk of the Rs 7,266 crore involves re-jigging existing central schemes for UP. Part of the cost of the package will be met by "converging resources from ongoing central programmes and schemes". The balance would be met through an additional plan central assistance of up to Rs 3,450 crore for both the states.

When Mayawati demanded a special package, an expert committee, headed by Planning Commission Member B.K. Chaturvedi, was appointed by Prime Minister Manmohan Singh. The committee recommended that fresh investments should be dovetailed with the existing schemes and turned down Mayawati's demand on the ground that such additional funds would be "unmanageable and clearly beyond the capacity of the state to spend". It also observed that spending over and above what was given in the XIth five year plan would need "major increase in the absorptive capacity, improvement in governance structures and major reform of the delivery system".

Even though the exact numbers for each state are to be worked out, the Bundelkhand package is in line with this thinking — additional funding for UP would work out to be less than a fourth of the total package. It is now up to the two states to identify agencies that will draw the project proposals for implementation and at the same time ensure convergence with the centrally-sponsored / funded programmes.

The package, which will be implemented over the next three years, aims at developing 700,000 hectares of land in UP and 400,000 hectares in MP with watershed development measures. Plus, 20,000 dugwells and 30,000 farm ponds each will be constructed in the two states to store rain-water for providing irrigation at critical stages.

Floods Worsen In Assam, Over 600,000 Affected; Landslides In Arunachal

No Improvement In J&K's Security After Article 370 Abrogation: NC Chief