The Pashas Of Luxury 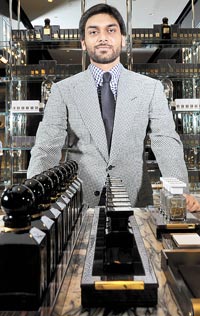 He is in august company. Priya Sachdev, daughter of Ashok Sachdev (The Sachdev Group, or TSG) retails Alexander McQueen, Moschino and Halston Heritage dresses thorough her Kitsch store. Neelam Khanna, wife of Ashok Khanna (P.R.S. Oberoi's grandson and owner of Ista Hotels and Ananda spas), has formed a joint venture with Hermès. Timmy Sarna, the son-in-law of real estate baron K.P. Singh (DLF), brought in Ferragamo and Armani through his venture DLF Brands. Then there are others like entrepreneur Sanjay Kapoor, managing director of Genesis Luxury, which has brought Canali, Bottega Veneta, Etro, Just Cavalli, Jimmy Choo, Tumi and Burberry to India.

Says Richa Karpe, director of investments at Altamount Capital Management: "We have a handful of families that are exploring options of entering luxury retail."

So, what is driving these men and women to market products that less than 1 per cent of India's population can afford? Says Sachdev, COO and creative director of TSG International Marketing: "We got into luxury because we felt that this is where the future is." TSG, which runs the Kitsch store, has businesses ranging from exports to auto retail. Sachdev is not new to luxury. "My first ever luxury buy was a Gucci bag for my mother, which I bought while studying in London. I had a part-time job with Gap and some extra pocket money."

Erstwhile television actress and producer Reena Wadhwa, who started Luxury Goods Retail, Gucci's joint venture partner in India, says, "It began as an investment in passion. Now, I see it as a real business opportunity."

India may be slower than China but there is no doubt that the future holds a lot of promise. While the market itself is growing, for entrepreneurs, there is the rub-off in being associated with global luxury brands. The Indian base of high net worth individuals (HNIs) grew 21 per cent in 2010. According to the Capgemini-Merrill Lynch World Wealth report, India had over 153,000 HNIs and is the 12th largest luxury market globally.

Luxury retail is a high-margin, low-volume business. But there are enough consumers to make India a viable destination. Darshan Mehta, president and CEO of Reliance Brands, which has brought in Zegna, and Paul and Shark to India, says that over the past three months, he has seen at least 40 customers walk into the Paul and Shark store in Mumbai and buy all six colours of their polo T-shirt, costing Rs 14,000 each.

"Markets go through phases. It starts with new money, which goes through what we call a flash-value phase, wherein people go for the brand name. In the second phase they understand the brand. In the third phase, luxury consumption becomes internal. India is largely in the first phase of flash-value right now," says Mehta.

Increased purchases by HNIs have also ensured that most luxury collections are now available in India. "We ensure that all brands have the latest collections and when they are launched internationally," says Dinaz Madhukar, vice-president at DLF-Emporio. "Consumers are very aware now and ask for the latest brands and collections," she adds.

"The ticket size per sale is increasing and the spread of the product category by the same customer is expanding," says Abhay Gupta, executive director of Blues Clothing Company, which has standalone boutiques for Corneliani and Versace Collection.

The action in luxury is not restricted to clothes, watches and jewellery. It extends to yachts, aircraft and, of course, high-end cars. Nigel A. Harwood, president and CEO of InterGlobe Established Products, points to an almost empty office. Most of his 20 sales representatives are meeting potential clients across India. Harwood deals with just the crème de la crème. His clients are part of a coveted list of about 15,000, and have disposable incomes of Rs 6 crore and above.

Now, demand has started to come from smaller cities as well. "We have got three people in a Tier 2 city in South India who are very interested in our auto and yacht collection. I am meeting them personally," he says, refusing to divulge even the name of the city.

Others like Anjani Kasliwal, daughter of textile magnate Nitin Kasliwal, has grown up surrounded with luxury. "I grew up seeing my father shop at the Dunhill store in London," recalls the director of Group SKNL. The Dunhill brand now has three stores in India, which Kasliwal manages. By January 2012, another two are planned in Hyderabad and Chennai. "I would even consider Chandigarh and Lucknow," she adds.

Swati Kumar, daughter of DS Group managing director Rajiv Kumar, is another scion of the group, foraying into luxury. Her venture is a multi-brand kids-wear retail-store, L'petite. Scheduled to open in November in Delhi, the store will house brands such as Burberry Kids. The segment will also see the entry of Armani Junior within the next year, backed by DLF Brands.
break-page-break
Swiss leather brand Bally will soon open its store in Delhi. "We felt there is a good market for high-end leather goods in the country," says Ankur Bhatia, executive director of Bird Group, which entered the luxury market with Porsche Design that retails men's accessories. It will also add a Van Laack (German apparel brand) store next year. "Luxury is a long-term play," says Bhatia.

Kapoor of Genesis Luxury is planning to bring in newer brands after a private equity infusion. "We are looking at expanding our footprint," he says.

Learning On The Job
Most luxury retailers entered India just as the market was beginning to open up. They face various challenges such as high real estate prices, limited number of HNIs (though the number is definitely growing) and high duties (so many Indians buy luxury products at duty-free locations such as Dubai).

Also, many joint ventures have not worked out. Earlier this year, Marc by Marc Jacobs closed down its outlet in Delhi. Says Sachdev of TSG International Marketing: "The Indian audience was just not ready for a brand like that, nor were they receptive enough. So it was best to pull out."

Some others pulled out thanks to differences between the joint venture partners. Valentino's entry was marred by a fall-out with Indian partner Yogi Retail, which operates Ministry of Fashion, a multi-brand outlet. American jewellery major Tiffany & Co. saw an unprecedented delay due to partner issues. "They have found the right partners and are looking for real estate options now," reveals a source.

The Murjani Group has exited most of its luxury partnerships over the past three years including Bottega Veneta, Gucci and Jimmy Choo. Industry insiders say the brands were losing heavily.

But a break-up with one partner does not mean the end of seeking presence in India. Gucci, for example, picked up the threads with Luxury Goods Retail. Jimmy Choo joined hands with Genesis Luxury. Says Wadhwa of Luxury Goods Retail: "Direct involvement by way of equity investment, and day-to-day management add significantly to local operations of all global brands. Gucci has benefitted by this change in 2009."

All major brands like to own and control day-to-day operations to maintain quality. What remains to be seen is how many of these tie-ups last in the long term.

Another barrier that luxury brands, and their Indian partners, face is the relatively higher taxes, which makes products more expensive in India. Indian HNIs frequently travel to overseas locations such as Dubai, Singapore and Hong Kong and pick up luxury products at cheaper rates.

Duties are another deterrent. Although custom duties have come down from 80 per cent levels to 30-32 per cent over a decade, it is still high. "In such a scenario, we try to factor it into the overall margin since passing the cost to the customer is not a great option," explains Gupta of Blues Clothing Company.

The next on the list of bottlenecks in luxury retail expansion is the lack of high-quality shopping environment in India. Some of these challenges will get addressed as better luxury shopping facilities are built across India over the next few years. At present, the limited space for retailing luxury brands is an entry barrier for new brands. As the Indian consumer moves from premium to luxury brands, the shopping environment will also change for the better.

Ashish Chordia of luxury group Shreyans, which introduced auto brands such as Porsche, Maserati and Ducati to India, says, "The challenges now lie in finding the right location and the right team members."

Some luxury brands are choosing to open shop outside of 5-star hotels and malls. Hermès has just opened its Mumbai store near Ballard Estate. For luxury retailers, the biggest advantage of such a move is the sharp reduction in rentals. Says a retailer: "If hotels are at Rs 1,000 per sq. ft, malls are at Rs 400 and high street at Rs 200." A substantial difference by any standards.

It may still be early days for luxury brands to take such a bold move as moving out to high streets, but it could well become the norm over the next couple of years.

For now, India's next gen is going the whole hog to bring in the biggest luxury brands to India. The next step will be to get them to move from Delhi and Mumbai to other cities. That is when the real proliferation of luxury brands will happen. The action in luxury is just about to begin.