The One For The Rest Of Us 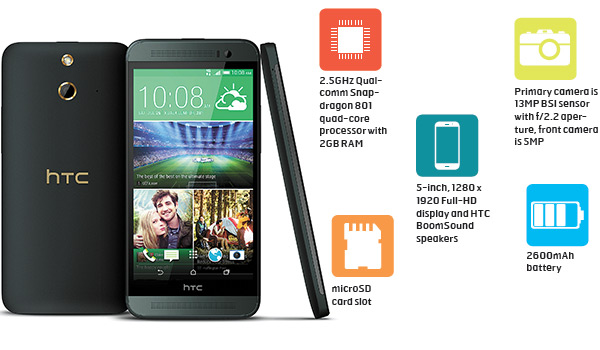 08 November, 2014
Print this article Font size -16+
It's pretty safe to  say that the one thing people have loved best about HTC’s flagship phones have been their design. A refusal to compromise on material and build quality have been the hallmark of more than one of HTC’s top-end offerings.

But, of course, that means a great deal of expense, both for the maker and the buyer. So here’s an attempt to bring the cost down a bit and yet not cheapen the look and feel of the device. Say hello to the HTC One E8, affordable brother of the all-metal One M8. From the front, the E8 is signature HTC. It’s a look that’s still classy and pleasing even though we’ve seen it on several devices now. Same chamfered edges, slim bezels and fantastic sounding speakers on the top and bottom. Also, the same silly placement for the power button —up on top in the centre. I always forget and go looking for it. But for whiners like me, the screen wakes up and sleeps off with two quick taps.

It’s on the back that the E8 looks different. It has a soft polycarbonate panel that makes it lighter, cheaper, and a little fond of oily fingers, even if I say so myself. But all that is a small sacrifice for many when it translates to a saving of about Rs 10,000. The M8 is Rs 43,299 as of this writing, and the E8 Rs 33,850.

The E8 is a good-to-hold smartphone, on the biggish side but narrow and comfortable. The soft back gives it some grip, instead of being dangerously slippery like the M8 which has a satiny feel.  When you turn it on, you’ll find a nice crisp screen. I didn’t like its auto brightness, but otherwise it’s a comfortable display in terms of colours and viewing angles. Text is crisp and clear. HTC’s Blink Feed, the magazine app that lets you see local content and your social networks, pulls out with a swipe from the left of the screen and can be swiped back when you’re done with it. HTC’s interface, Sense 6, is simple and well optimised with Android on the device. It’s easy to get used to and has its share of smart features such as a number of gesture customisations, without seeming overly gimmicky. It’s a clean and light experience.

The E8 is also quite the performer. Not only does it score high on synthetic benchmarks, it works free of lag and stutter and does a good job of graphics. Lovers of gaming should have a good time. There’s only the faintest heating up. With the sound being as good as it is, consuming media is a good experience too. The keyboard on the E8 is pretty nice and supports trace input.

If there’s one thing I’m disappointed with, it’s the camera. Although I’ve never been convinced by the 4 ultra pixel format, I think they may as well have stuck with that one. Although the photos wouldn’t zoom in and enlarge much, there’s something not quite right with the E8’s main camera. Acceptable in good light, it doesn’t quite stand up to the competition. It’s in low light though that things turn sour. Pictures in darker places are outright murky and just don’t look good even when you use the night mode or make adjustments. There are panorama and HDR modes but still, there’s the dark pictures in lower light to deal with.

The E8 is a dual-SIM and uses nano cards. Call quality is good and so is signal reception. The battery is adequate for most of the day.
(This story was published in BW | Businessworld Issue Dated 06-10-2014)
Tags assigned to this article:
mala bhargava magazine htc one m8 magazine 06 october 2014 htc one e8 sony dsc rx100